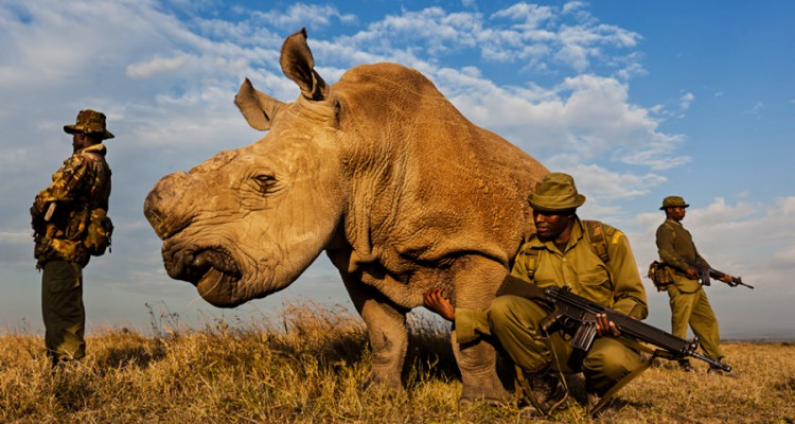 VIA Powerful Primates by Jesse Herman

As a species the rhino is at least 50 million years old, but if something is not done to curb the appetite for its horn, it may not last the century. The poaching trade in both rhino horn and ivory has moved to a new level and now operates in a way that is comparable to drug cartels or arms dealing. Penalties are often paltry in Africa, from where much of the horn originates, and poorly enforced in Asia, where it ends up. Some crime syndicates are expanding their existing operations into the ivory and horn trade – the risks are fewer and the profits can be greater.

The reason for all this slaughter is based on a deep-rooted, ancient belief that is nothing more than myth. Rhino horn is composed of keratin – gelatinous hair – with no beneficial medical properties; just hundreds of years of reputation and rumour. Chinese materia medica list it as a method of reducing fever and febrile convulsions. But even if it did work, one cannot help asking, when the rhino population of Africa has been reduced by 96 per cent in 50 years – why not take an aspirin? The myth is that the horn can make you look younger and cure diseases. But consuming the horn is just like biting your fingernail. The horns go for $30k per pound. Rhinos either die or are left mutilated and vulnerable to infection. Poachers get 25 years in prison if caught.

There is only one northern white male rhinoceros left on the planet. Its home is 200km north of Nairobi in Kenya, at Ol Pejeta Conservancy.

Joining Sudan, the male, are two female northern white rhinos. Together, they are three of the last five remaining northern white rhinos in the world.
The subspecies are on the verge of extinction, suffering greatly since poaching surged in the 1960s. According to The Guardian, a rhino’s horn can sell at prices upward of $75,000 per kilo (2.2 US pounds), leaving them under great threat.