Al Qaeda’s offshoot in Yemen claimed responsibility for the attack on a Paris magazine by two French brothers, reasserting its dominance among terror organizations targeting the West.

The announcement on Wednesday came as French investigators said they are searching for another man whom they have identified as a suspect in last week’s attacks.

The assertion by al Qaeda in the Arabian Peninsula, or AQAP filled out the emerging picture of a long-standing relationship between Said and Chérif Kouachi and AQAP. It came amid new indications that the older brother, Said, was more deeply involved in militancy in Yemen than was previously known. A Yemeni security official disclosed for the first time that Said is believed to have trained at camps run by AQAP during the nearly two years he spent in Yemen.

Nasser bin Ali al-Ansi, a founding member of AQAP who is part of the group’s inner circle of leadership, claimed Anwar al-Awlaki, a senior AQAP operative, planned the magazine attack before his death in a U.S. airstrike in September 2011.

Mr. Ansi said the group’s leadership “chose the target, laid the plan and financed the operation.”

U.S. officials confirmed that one of the brothers received approximately $20,000 in Yemen in 2011 to help finance the Paris attack.

However, there is no confirmation that either of the Kouachi brothers met directly with Mr. Awlaki or other senior AQAP leaders.

During the 11-minute video, Mr. Ansi said al Qaeda’s followers “claim responsibility for this operation as vengeance for the messenger of Allah,” referring to the Prophet Muhammad. In 2013, AQAP’s online English-language magazine, Inspire, listed the editor of the magazine Charlie Hebdo, Stéphane Charbonnier, among its most-wanted targets because the weekly published cartoons that the group viewed as insults to the prophet.

AQAP didn’t claim responsibility for the two separate terrorist attacks around Paris last week by Amedy Coulibaly on a policewoman and a kosher grocery store. While praising Mr. Coulibaly’s attack, AQAP made clear that the assault on the magazine on Wednesday, the first of the three attacks, was the only one the group was claiming.

Unlike the Kouachi brothers, Mr. Coulibaly has claimed to be associated with Islamic State. In a video circulated Sunday, two days after he was shot dead by police, a man who appeared to be Mr. Coulibaly pledged allegiance to that terror group and its self-proclaimed caliph, Abu Bakr al-Baghdadi.

The man described Chérif Kouachi as part of the same team, and said he had lent him a few thousand euros to attack the magazine. Before his death, Mr. Coulibaly told a French TV station that the two attacks were synchronized.

French investigators are searching for a fourth suspect and trying to determine whether that person may have provided assistance to Mr. Coulibaly or played a more active role in some of the attacks, according to a police officer familiar with the probe. They are looking into whether the suspect was behind last week’s shooting of a jogger after they traced shell cases found in the park where the man was severely wounded to a Tokarev gun Mr. Coulibaly carried when he attacked the kosher grocery.

Since 2013, Islamic State has increased its calls for supporters to launch lone-wolf attacks. It remains unclear whether Mr. Coulibaly was acting on his own and responding to such calls, or whether he coordinated with the extremist group at a higher level. Islamic State inspired lone-wolf attacks in Canada and Australia late last year.

Al Qaeda once dominated the global jihadist movement until Islamic State broke from the parent organization in 2013 and challenged its leadership. The rival groups are now locked in a bloody battle for turf and influence in Syria.

AQAP has further entrenched itself in Yemen over the past few months as the government’s already-feeble grip on the country slipped almost entirely. Similarly, Islamic State has gained power after establishing a base in parts of Syria where the regime in Damascus has lost control. 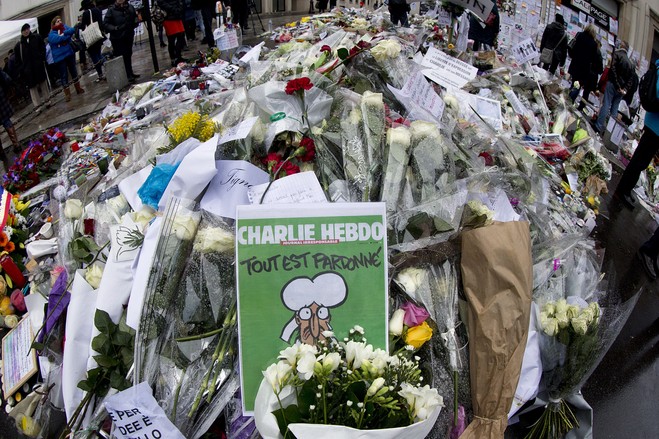 A copy of the latest edition of Charlie Hebdo is placed among floral tributes outside the magazine’s offices in Paris on Wednesday. Joel Saget/Agence France-Presse/Getty Images … 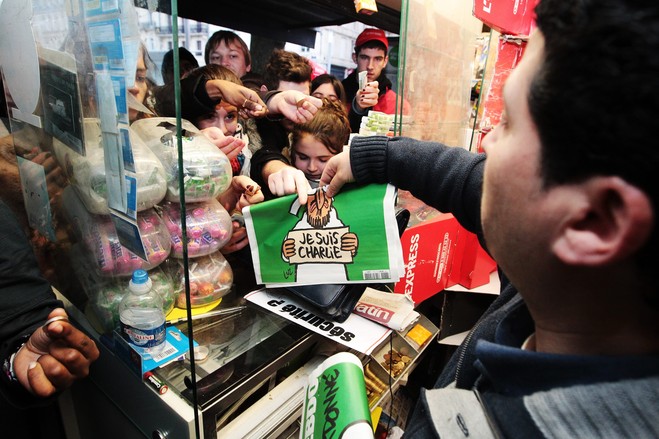 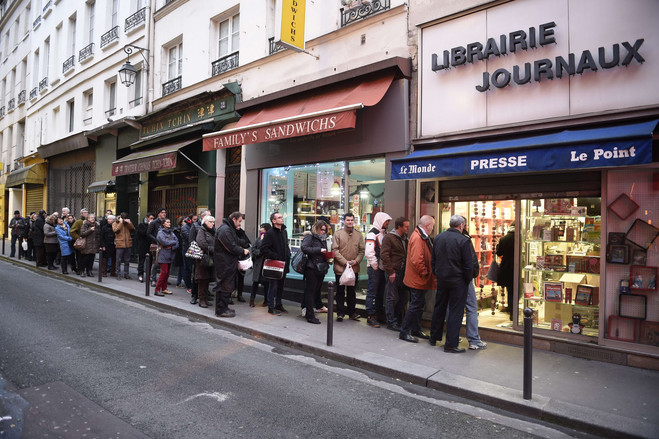 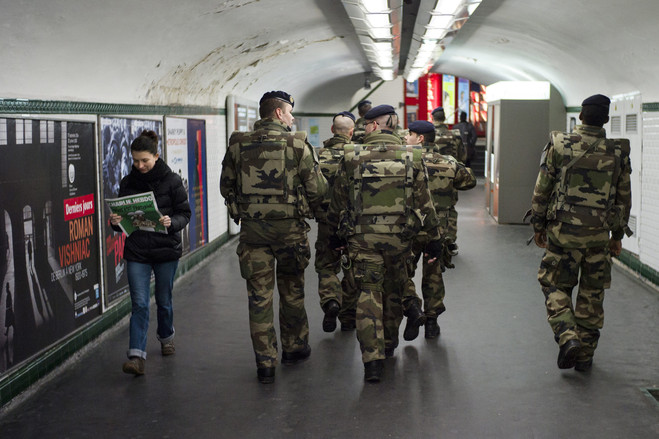 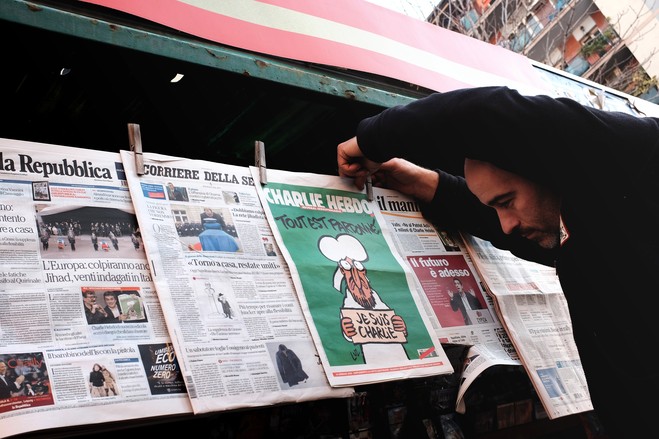 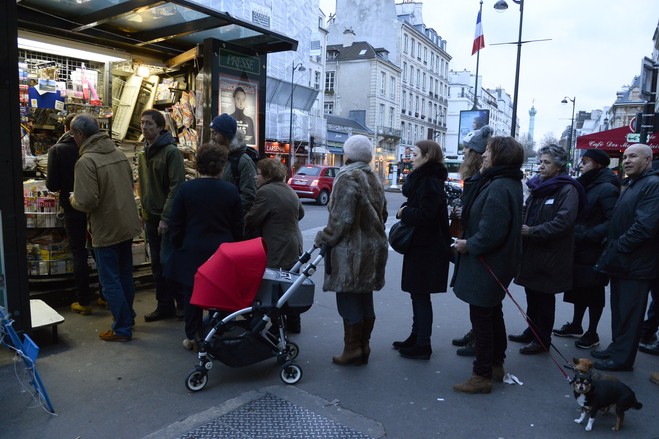 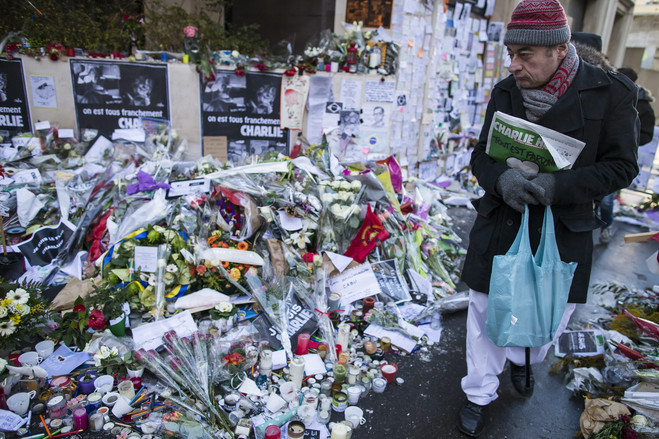 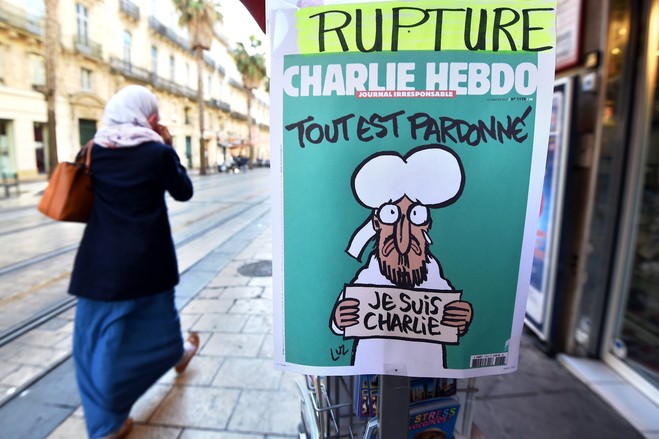 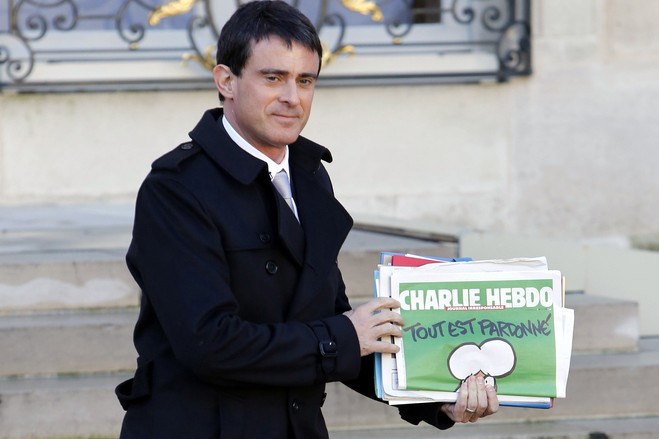 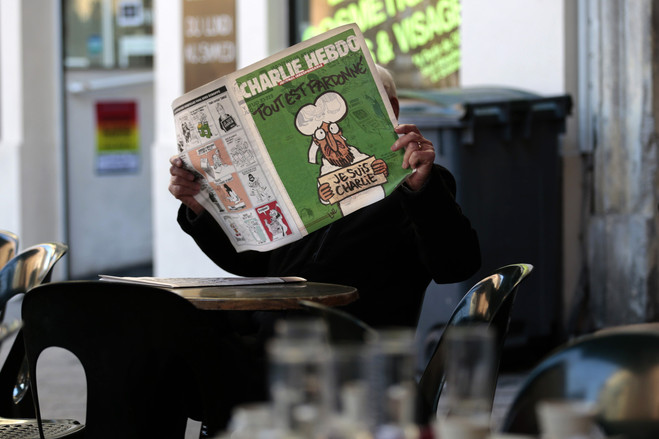 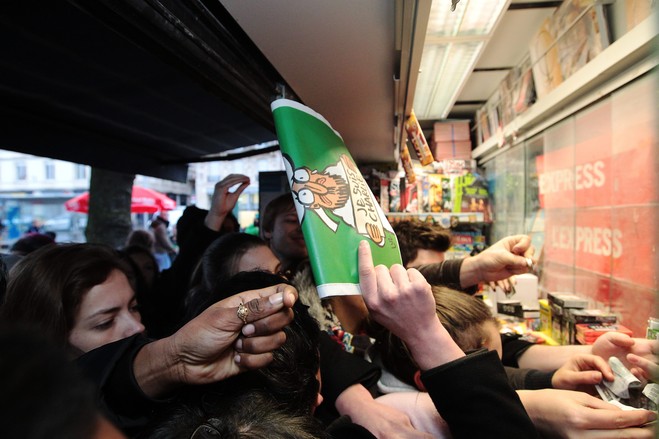 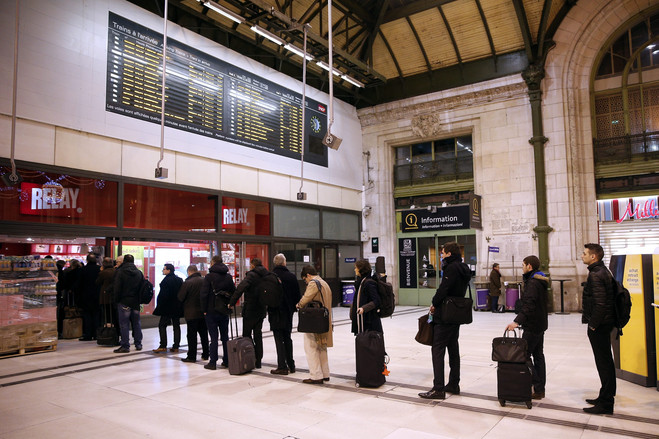 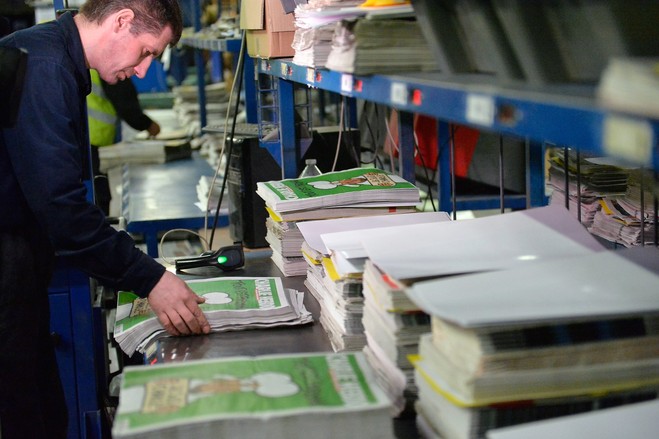 Long lines form at newsstands in France on Wednesday for the latest edition of satirical magazine Charlie Hebdo. Distributors are expanding the print run to as many as five million copies in the wake of last week’s terror attacks. Bonnaud Guillaume/Maxppp/Zuma Press …

The U.S. government said it had verified the authenticity of the video claiming responsibility. French officials had no immediate comment.

The attack on the magazine’s offices last week killed 12 people and was followed by two more days of violence that rocked France and prompted a massive increase in security.

Mr. Ansi said that the AQAP statement was meant to clarify for the wider Muslim world the group’s role in the terror spree, which has shocked Europe and turned Charlie Hebdo into an international symbol of freedom of expression.

A member of AQAP’s media arm told The Wall Street Journal that the Paris attacks weren’t planned with Islamic State. His denial suggested that if the three separate attacks were coordinated, that was done by the attackers themselves. Although Mr. Coulibaly suggested collaboration, the Kouachi brothers made no mention of such cooperation in comments to the media before they were killed. They did say they were operating on behalf of AQAP. 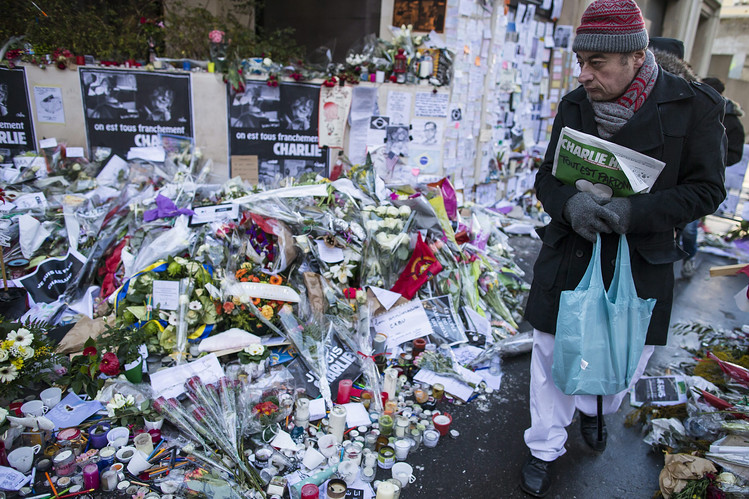 A man holding the new edition of the French satirical magazine Charlie Hebdo pays his respects in front of the improvised memorial on Rue Nicolas Appert, near the Charlie Hebdo headquarters in Paris. European Pressphoto Agency

Mr. Ansi warned of more attacks if countries didn’t stop what he said was insulting “our prophet and sanctities,” according to the video.

“Your governments blocked their ears from this address. They became stubborn and persisted in protecting and supporting the offensive cartoonists, directors and journalists,” Mr. Ansi said. He named only France specifically.

Despite the claim that Mr. Awlaki planned the attack, it remains unclear how long in advance the Kouachi brothers planned the tactical details.

The last known time the Kouachis went to Yemen was 2011. Former neighbors and Yemeni officials have said that Said spent close to two years in Yemen, some of it studying at an Arabic language school in the capital San’a. His younger brother Chérif also spent time in Yemen in 2011, according to U.S. and French officials. A neighbor who lived on the same street as Said in the walled old city of San’a in 2009 said the Frenchman would be gone from his dormitory and his studies for extended periods at that time.

The senior Yemeni security official disclosed for the first time on Wednesday that in 2009, Said Kouachi traveled frequently to Dammaj, an oasis town near the Saudi border that was home to the country’s largest school for the fundamentalist Salafist teaching followed by al Qaeda adherents. Dammaj was outside central government control, and AQAP had built training camps within a two-hour drive, according to this official.

“We know that Said visited Dammaj numerous times and from there, we believe he traveled to the AQAP training camps” in the al-Kitaf region, the official said. “Areas around Kitaf are where hundreds of foreigners would go for training since it’s easy, unmonitored and in AQAP-controlled areas.”

Around that same time, Said is believed to have befriended Umar Farouk Abdulmutallab , a man groomed by Mr. Awlaki for a foreign terror attack.

The two friends lived across the hallway from each other in a San’a dormitory of the language school before Mr. Abdulmutallab left Yemen in December 2009. Later that month, he tried to detonate explosives hidden in his underwear on a Detroit-bound aircraft on Christmas Day. He was convicted of terrorism charges in the U.S. in 2012.

Mr. Ansi is a veteran Yemeni fighter in overseas jihadist combat. Since Mr. Awlaki’s death, he has taken over a larger role in communicating the terrorist group’s beliefs to its global followers.

Mr. Ansi, or Sheikh Nasser, as he is known in jihadist circles, published a statement on behalf of AQAP last year in the midst of the ideological split between al Qaeda loyalists and followers of Islamic State, warning that the whole enterprise of attacking the West and building a caliphate, or Islamic empire, would be endangered and weakened by internal disputes.

The U.S. considers AQAP the deadliest offshoot of its al Qaeda parent organization—the most capable of launching global attacks from its base in Yemen. Before the Paris attacks, AQAP’s last known attempt at an operation against the West was in 2010. After Osama bin Laden and Mr. Awlaki were killed in 2011, U.S. officials have claimed al Qaeda was on the retreat.

But AQAP appears resilient despite nearly $1 billion in American military, economic and humanitarian assistance to help the Yemeni government fight the group since 2011 and dozens of U.S. airstrikes targeting AQAP’s leadership and training camps.

Although the U.S. program in Yemen initially rolled back territory from AQAP’s grip in 2012, the group resurged last year, taking control of more territory across the country than ever before with the help of antigovernment tribes.

“These groups are constantly reconstituting themselves and filling their ranks despite U.S. counterterrorism operations,” said Frederic Wehrey, a senior associate for the Carnegie Endowment for International Peace. The group is flourishing, in part, because so much of the country is out of the control of the weak central government, he added.

In September, Yemen’s government was overthrown by a second militia, the Houthis, who oppose the U.S. military program in Yemen. The Houthis represent the Zaidi sect, an offshoot of Shiite Islam whose followers are seen as heretics by hard-line Sunni groups such as AQAP.

AQAP has used the Houthis’ rise as a recruitment tool and the groups have been locked in violent clashes across Yemen for the past few months, with government forces often retreating to their barracks. AQAP bombings in San’a have also risen steadily since the fall.

—Felicia Schwartz and Damian Paletta contributed to this article.