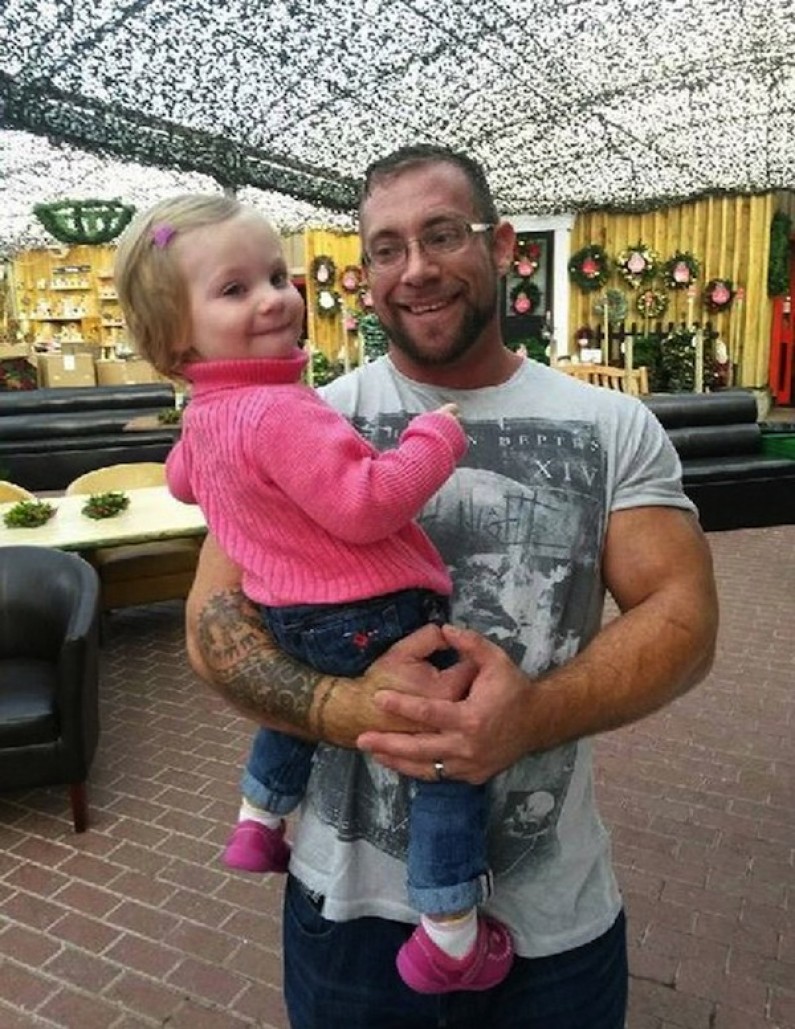 VIA “elitedaily.com” by Sean Levinson

Two British parents have gotten tattoos of the same red birthmark that covers their daughter’s body so she wouldn’t feel alone.

The Mirror reports that 18-month-old Honey-Rae Phillips was born with a birthmark that has grown right along with her and now occupies nearly half of her entire right side.

Her 40-year-old mother, Tanya Phillips, said the birthmark is a side effect of medical difficulties her daughter experienced after birth.

She told the Mirror,

She’s struggled to breathe when she was first born and was rushed to the special care unit. When I went to see her she was just lying in a little incubator and that’s when I saw it. It broke my heart.

I just sobbed and sobbed knowing my baby was going to permanently marked for the rest of her life.

Phillips, who has three other children, covered Honey-Rae’s legs whenever they went out to avoid stares from strangers.

She dressed in her shorts for the first time last summer only to hear an old couple whispering to themselves nearby.

And I knew if adults could be that insensitive, then kids at school would also be unintentionally mean.

It was at this point when she and her husband, Adam, realized their daughter would be much happier if she wasn’t the only one who looked the way she did.

The Grimsby couple decided to get duplicates of Honey-Rae’s birthmark inked on their bodies to remind her that she’ll always have her parents’ love.

Adam got the tattoo last Christmas as a present from his wife.

It cost the equivalent of $124 and took about two-and-a-half hours.

Last week was Phillips’ 40th birthday, so Adam gave her the same gift over the weekend.

It was incredibly painful, especially as I had a flower to cover some old star tattoos, but it was worth every second of the pain.

When the swelling went down, I showed Honey-Rae, and she gently touched it and smiled as she said ‘Match,’ pointing to her own leg.

She said that Honey-Rae now loves to touch her parents’ tattoos and then her own birthmark, laughing each time.

The tattoo is far more extreme than any body art she’d ever dreamed of getting, but Phillips says it’s well worth the price of her daughter never feeling different again.