By Fabrizzio Silveira on January 6, 2014 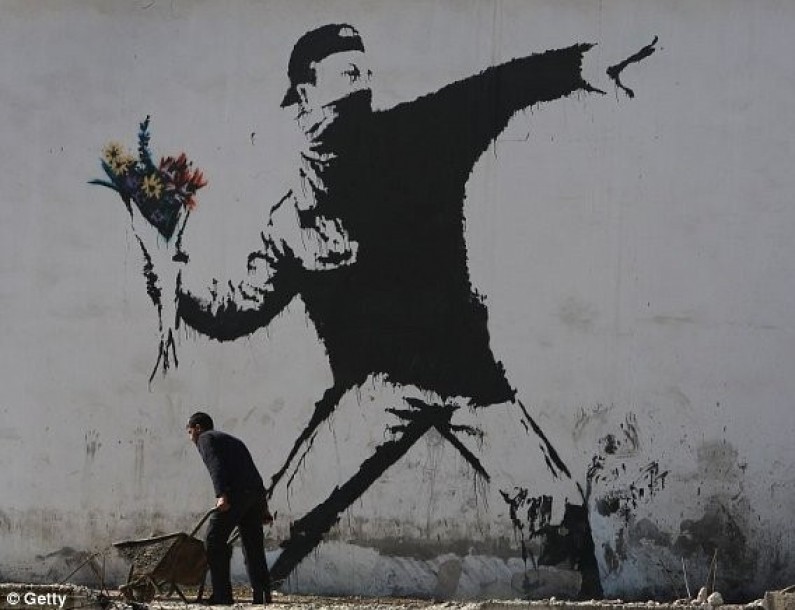 The man, the myth, the legend.  One of the most influential street artists of the 21st century.

And what is it to be street? To portray the Power of the people in splashed paint.

A man from hungry beginnings as a freehand graffiti artist in 1990 with the Bristol DryBreadz. Later, five passionate years moving as an embodiment of the London underground scene.  A diabolical hand to flow, lion’s heart, and an electric mind… time pressed forward and Banksy was driven by a force telling him to share genius with the world.  To Change the world.

Starting in the UK he passed through Mexico, Palestine, US and dozens of other destinations leaving a duplicitous trail of obstinate energy at each stop.  His art grew and as the allegory is often told, his influence followed suit.  A reputation as an urban Picasso; modern, raw, and real. Portraying elements of anti-war and controversial anti-capitalist themes, he was becoming a symbol of inspiration and hope for a New Generation.  In 2010, he was named most influential man of the year by TIME magazine. Banksy had acquired the Midas touch.

So who is Banksy…? An anonymously synonymous representation of autonomy. Banksy chose to move in silence as a true dedication to his art, meaning he did not reveal his true identity. Not in it for the fame, in it to change the game. A game changer. His message – the Art, not the artist.  In each piece a challenge for societal self-reflection and encouragement of independent Thought with the lingering freedom of interpretation. Banksy has inspired an art loving generation to question, dream, and face fear.  Ah, so powerful. Garnering strength through feats like creating pieces on the heavily militarized Palestine West Wall.  The meaning – to dare to risk and reap the reward. Banksy is modern day warrior and a visionary and for that we support you, my brother.