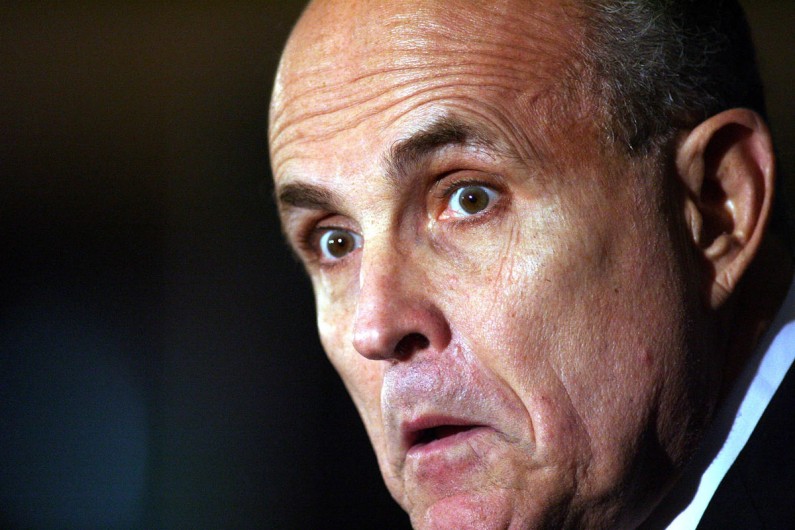 VIA “realclearpolitics.com” by Carl M. Cannon

Two weeks ago, while speaking at a dinner in New York, Rudy Giuliani made news—in a negative way—by opining aloud about President Obama’s love of country.

Democrats pounced on the ex-mayor’s lapse, demanding that other Republicans repudiate it. Prominent political journalists asked 2016 Republican presidential contenders to respond. Some conservatives, noting that Giuliani hasn’t held office—or any official GOP role — in 14 years, complained of a double standard in the media. As Florida Sen. Marco Rubio put it puckishly, “Democrats aren’t asked to answer every time Joe Biden says something embarrassing, so I don’t know why I should answer every time a Republican does.”

The New York media was less forgiving. Familiarity with Giuliani over the years has bred, if not contempt, deeps doubts about his maturity and prudence. In the New York Daily News, columnist Mike Lupica accused hizzoner of sounding like a “crackpot” who “makes news by pandering in an unhinged way.”

When Giuliani doubled down on his comments, Daily News reporters Erin Durkin and Eli Rosenberg characterized them as “McCarthyesque rants.” That’s not a description one normally finds in a straight news story, so one might conclude that the paper has a staunch institutional position against questioning the patriotism of others. One would be wrong.

Only a week later, the same newspaper showed the pictures of four prominent Republican senators—Mitch McConnell, Ted Cruz, Tom Cotton, and Rand Paul—over the bold-faced, all-caps headline “TRAITORS.” The accompanying editorial accused these four officeholders and 43 other GOP senators who signed an open letter to the leaders of Iran regarding ongoing nuclear arms talks of “un-Patriot games” and “treachery.”

Although this might be attributed to the idiosyncrasies of Daily News owner Mort Zuckerman, who is known to hold strong opinions about the Middle East, there’s a larger problem. This anti-patriotic cudgel was first wielded at the White House. And it’s been picked up by an array of liberal activists, left-leaning news organizations, and very prominent Democrats.

Recovering instantly from their Giuliani-induced apoplexy, these Paladins of liberalism launched their own “McCarthyesque” attacks.

Ed Gilgore, writing in The Washington Monthly, called the Republican letter “sedition in the name of patriotism.”  Obscure law professors claimed that the 47 senators violated something called the Logan Act, a 1798 statute forbidding private citizens from negotiating on behalf of the nation “without the authority of the United States.” An unnamed character assassin placed on the White House website a petition calling for the senators to be criminally prosecuted for treason. Hundreds of thousands of amateur constitutional scholars clicked their signatures on this ugly little petition, and when White House press secretary Josh Earnest was asked about it he was too cute by half.

“For a determination like that,” he said with a straight face, “I’d refer to the Department of Justice.” (There is a correct response to this question, and it goes like this: “I know the people signing that petition are trying to show support for the president, and we appreciate it, but calling that open letter a violation of Logan Act is insane.”)

But why would Josh Earnest say that? President Obama’s own response to the letter encouraged all this loose talk about treason. “It’s somewhat ironic to see some members of Congress wanting to make common cause with the hardliners in Iran,” he told reporters. “It’s an unusual coalition.”

Hillary Clinton, holding a press conference ostensibly to explain why she hid her work product at the State Department, took a similar tack. Although no one asked her about the GOP letter, she gave her opinion: “Either these senators were trying to be helpful to the Iranians, or harmful to commander-in-chief in the middle of high stakes international diplomacy.”

Among the nastiest slurs were those emanating from the Twitter account of Colorado Congressman Jared Polis, a liberal Democrat, who sent out tweets castigating Tom Cotton as “Tehran Tom.”