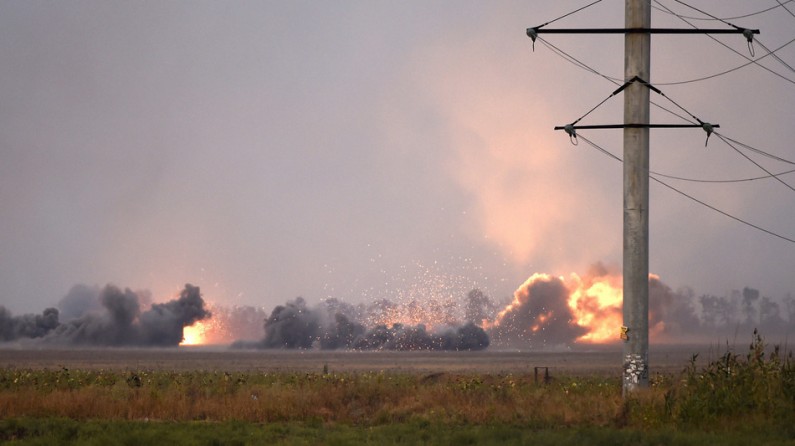 VIA “realcleardefense.com” by Ian Bremmer and Harry Kazianis

Editor’s Note: The below is an interview with Ian Bremmer. Mr. Bremmer serves as president of the Eurasia Group, a political-risk consultancy, and a Global Research Professor at New York University. He is the author of the popular book Every Nation for Itself: Winners and Losers in a G-Zero World.

Kazianis: The crisis in Ukraine seems to have no end in sight. Where do you see the crisis going in the short to medium term? Do you see any advantage for Russia to try and extend its reach in Eastern Ukraine into places like Mariupol or other strategically important areas of the country? What would be the risks of such a move?

Bremmer: I see more escalation.  The latest ceasefire can’t last for too long—it’s hard to implement key components of the deal.  The issue is that the ceasefire leaves Ukrainian President Petro Poroshenko with very little room to maneuver.  The agreement starts giving autonomy to a region comprising more than a tenth of Ukraine’s GDP—and it requires constitutional reforms enshrining these privileges.  That’s not an easy sell for Poroshenko domestically.  He gets very little in return for it.

Longer term, Ukraine is supposed to reestablish control over what used to be their border with Russia by the end of the year.  But that’s predicated on new local elections and constitutional reforms that aren’t going to happen in a manner that satisfies both sides.   So that means we’ll likely see a Russia-led resumption of the fighting at some point.  The risks of such a move would be greater sanctions (which would surely come if Mariupol is taken).

Kazianis: The Baltic States are becoming increasingly worried they could be the next target of Russian aggression. If you were advising any of the Balts what would you tell them should be their next move? Increasing their military budgets dramatically as a show of strength? A request for an increased NATO presence on their soil?

Bremmer: If I was advising the Balts, yes, I’d suggest an increase in military spending.  But its importance would pale in comparison to garnering stronger support from NATO.  The Balts should do anything that can tie NATO more directly to them, both in terms of basing and automatic ‘red line’ responses.  A big piece of deterring Russian aggression is the perceived punishment.  In Ukraine, it is incremental calibrated sanctions.  That punishment hurts Moscow and can give it pause, but it’s not enough to change the overall policy course—it’s an inadequate deterrent.  Article 5 of the NATO charter, on the other hand—which commits each member to treat an “armed attack” on one member as an attack on them all— is a massive deterrent.  The Balts should do anything it can to make sure the West sanctifies that rule… and more clearly defines an ‘armed attack.’  In Ukraine, Russia pushed the envelope to see how much havoc it could wreak without its moves being dubbed an ‘invasion.’  The Balts should push for the lowest possible bar for the definition of an ‘armed attack.’

Kazianis: There has been a lot of talk concerning Russia’s attempts to modernize its armed forces. Russian President Vladimir Putin is investing billions of dollars on rebuilding his nuclear forces, navy and air force. Can this be sustained considering falling oil prices and tough economic sanctions imposed by the West?

Bremmer: An authoritarian state like Russia can take much more economic pain than a democracy can—Putin can defray citizens’ frustration with the economy by appealing to their nationalism via his actions in Ukraine.  In the long term, the present course of action isn’t sustainable.  But if it’s about who crumbles later, Ukraine will break long before Russia.

Kazianis: How would you rate the overall response of the West to Russian aggression in Ukraine? Has the West done enough to impose costs on Moscow for its moves in annexing Crimea and its actions in Eastern Ukraine? Moving forward should the West begin to arm Ukraine?

Bremmer: The Obama administration’s Ukraine response is its greatest foreign policy failure to date.  It’s not about imposing even more aggressive costs on Moscow; rather, it’s about a more balanced response.  The best Western approach would have been to help Ukraine achieve some sort of balance between European and Eurasian affiliation.  That ship has sailed.  Once the conflict erupted, the policy failure was the overwhelming focus on punishing Russia.  I would say that the Western approach has been 80% punishment for Moscow and 20% support for Kiev.  That is precisely the opposite ratio of what they should be doing.  And by help, I mean support for the Ukrainian economy – not a move to arm Ukraine with weaponry, something that the Europeans are incredibly hesitant to do.  Not only would it further drive a wedge between American and European policy on Ukraine, but it would inevitably lead to Russian escalation that the West isn’t prepared to match.

Kazianis: Over the long-term what should be the policy of the West when it comes to Ukraine? Should Ukraine be admitted into Western organizations like NATO or the EU? Could Ukraine instead become a neutral state between Russia and the West joining neither camp and acting as some sort of “bridge” between both sides?

Bremmer: A neutral Ukraine serving this function would be the ideal equilibrium.  But recent events have made that exponentially harder to achieve: Russia has absorbed the most pro-Russian segment of Ukraine, and its actions have turned the remaining Ukrainian population staunchly against any possibility of working with Moscow.  Down the road, the EU association will likely stick.  NATO shouldn’t be a possibility.