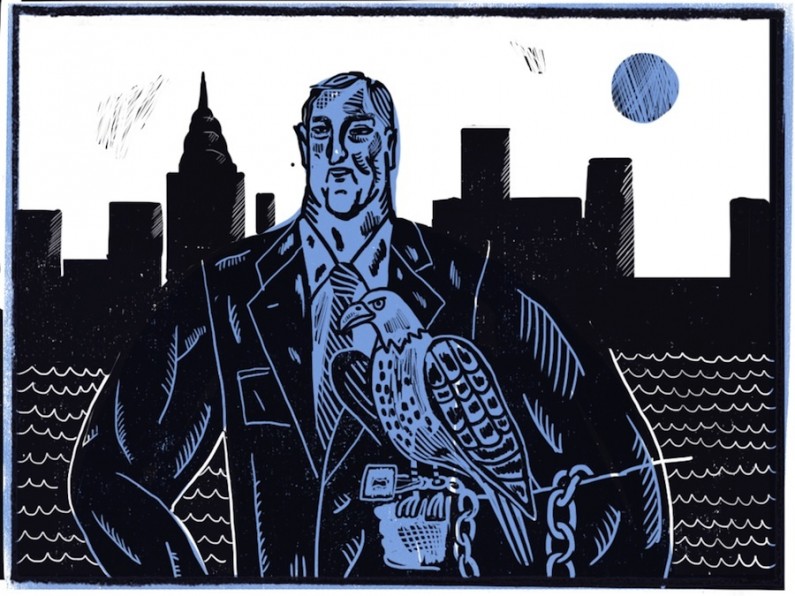 VIA “vice.com” by Kevin Lincoln

With their recent pledge to spend $889 million on the 2016 presidential election, it’s time to recognize a weird truth about American politics: The Koch brothers, namely Charles and David, with an assist from David’s twin William, have a financial influence on par with the two major political parties.

Who are the Koch brothers? What is a Kochtopus? And should we all start preparing to live on boats by 2025? If you live in the United States, and you aren’t planning to move to Mars before 2016, pay attention.

WHO ARE THE KOCH BROTHERS? When you use the words “Koch brothers” in relation to American politics, you’re probably talking about Charles and David Koch. But there are two more Koch brothers: Frederick, the oldest, and William, David’s twin. Here’s the breakdown on the family.

FRED KOCH The family patriarch is Fred Koch, who started what his sons would later rename Koch Industries. Fred was a chemical-engineering graduate from MIT, and he invented a new way of converting oil into gasoline, which he used, largely, in the Soviet Union. Because of his presence there, he bore close witness to Stalin’s excesses, and it bred in him a deep—some would say paranoid and pathological—distrust of Communism.

In 2010, Jane Mayer published the definitive profile of the Kochs in the New Yorker , and she wrote of Fred, “In 1958, Fred Koch became one of the original members of the John Birch Society, the arch-conservative group known, in part, for a highly skeptical view of governance and for spreading fears of a Communist takeover. Members considered President Dwight D. Eisenhower to be a Communist agent… ‘The colored man looms large in the Communist plan to take over America,’ [Fred Koch] warned. Welfare was a secret plot to attract rural blacks to cities, where they would foment ‘a vicious race war.'”

Sounds like a fun guy, right? His sons thought so. Fred raised Frederick, Charles, David, and William in his image, forcing them to work long days on the family ranch and flooding them with his political opinions.

FREDERICK The eldest of the Koch brothers, Frederick was essentially disowned by his father when he decided to go to Yale instead of MIT and study drama. In his 2010 New York magazine profile on the Kochs, Andrew Goldman wrote, “Frederick busies himself, William says, ‘buying castles,’ like the Schloss Bluhnbach in Austria, the former hunting lodge of Archduke Franz Ferdinand.” According to Mayer, Frederick moved to Monaco and began collecting objects of historical significance. Politically, he appears to play little role in the family now.

CHARLES The second eldest, Charles is the brother who turned Koch Industries into the second-largest privately-owned company in the United States, with a revenue of $115 billion, according to Forbes. (David also played a role in the company, but most of the credit is given to Charles.) Products under the Koch chemical umbrella include Dixie cups, Angel Soft toilet paper, and Brawny paper towels, which the Nightly Show’s Larry Wilmore painfully discovered when he tried to boycott the company. Koch Industries is also a leading producer of formaldehyde, and worked hard to fight the government’s labeling of the chemical as a known carcinogen — an effort that ultimately failed after David resigned from the National Institute of Health’s board.

DAVID Mayer and Goldman’s 2010 articles were a shock to plenty of folks in New York who had previously thought of David Koch as the rich guy who just gave everyone money. David’s philanthropy is the most complicating factor in the Koch family narrative. In The Chronicle of Philanthropy ‘s top 50 philanthropists of 2013, Koch placed No. 24 with a donation to New York-Presbyterian Hospital of $101 million. Beyond that, he’s given $100 million to MIT, resulting in the creation of the David H. Koch Institute for Integrative Cancer Research, and hundreds of millions more toward a number of causes: fighting prostate cancer, which he suffers from; renovating the Smithsonian’s dinosaur hall; a wing at the American Museum of Natural History; $65 million to the Metropolitan Museum of Art; and $100 million to the State Theater of New York at Lincoln Center, which was renamed the David H. Koch Theater and is home to the New York City Ballet and New York City Opera.

David also had a rep as a playboy: Mayer wrote that he was “described by associates as ‘affable’ and ‘a bit of a lunk,’ enjoyed for years the life of a wealthy bachelor. He rented a yacht in the South of France and bought a waterfront home in Southampton, where he threw parties that the website New York Social Diary likened to an ‘East Coast version of Hugh Hefner’s soirées.'” He’s since settled down with a wife, and told Goldman that prostate cancer had sapped his sex drive.

David and Charles are tied as the 9th-richest people in the world, and David is the richest man in New York City, eclipsing former Mayor Michael Bloomberg.

WILLIAM If Frederick’s the black sheep, William is the runt. Goldman wrote that William lived in David’s shadow, playing behind him on the MIT basketball team and believing himself the least-preferred of the Koch boys growing up. Goldman, among others, have attributed William’s dogged pursuit of America’s Cup—he spent $65 million to win the amateur sailing competition in 1992—to be one protracted dick-measuring contest against Charles and David.

William’s issues with the family took a litigious turn when he and Frederick tried to buy out Charles from Koch Industries. They failed, and William sold out his shares for $470 million, but believed he was undercut. The 15-year legal battle against his brothers—which included Charles and William cold-shouldering each other at their mother’s funeral—ended in 2001 with a settlement. In the meantime, William started his own chemicals company, the Oxbow Group. He also collected art, including model boats and a photo of Billy the Kid, once had to file a lawsuit to evict a lover from one of his condominiums, and got duped by a wine merchant who sold him $5 million worth of fake wines. He’s now married, for the third time, to a Rooney, as in the family that owns the Pittsburgh Steelers.

WHAT DO THE KOCH BROTHERS BELIEVE? If you were to describe the Koch brothers’ political views in one word, it would be “libertarian.” But through their pursuit of power and influence—especially over the last few years—that easy label has been muddled somewhat. Because despite their MIT educations, and David’s endless fueling of the arts and science research, the Koch brothers have become the financial engine that makes the Tea Party go.

Both David and Charles were heavily influenced by Friedrich von Hayek’s free-market bible The Road to Serfdom , and further by the work of Robert LeFevre, an advocate for the abolition of government. David ran as the Libertarian Party’s vice presidential candidate in 1980, spending $2 million on the campaign. Among the party’s goals were the abolition of various federal law enforcement and regulatory agencies, including the CIA, the SEC, and the Department of Energy. The party also wanted to eliminate Social Security, minimum wage laws, gun control laws, and income taxes—positions the Koch brothers still hold, to varying degrees. (On the flip side, they have become less vocal about legalizing prostitution and recreational drugs, which were also included in the party’s platform that year.)

The Kochs’ money didn’t make much of a difference. Libertarian Party candidates received one percent of the vote that year, and David and Charles retreated from conventional politics into special-interest financing efforts. They continue to represent similar political positions, with the addition of advocating for repeal of the Affordable Care Act and trumpeting climate-change denial. The latter position is likely influenced by their business interests: according to UMass-Amherst’s Political Economy Research Institute, Koch Industries ranked as the country’s 13th-worst air polluter in 2013. And their support of the Tea Party has caused the Kochs to promote efforts against abortion and gay marriage and in favor of interventionism, all positions that the Kochs otherwise claim to oppose.

Vermont Senator Bernie Sanders, one of the most liberal members of Congress who has been teasing a run for the 2016 Democratic presidential nomination, gives a pretty good idea of how the far-left feels about the Kochs in a statement on his website: “The agenda of the Koch brothers is to repeal every major piece of legislation that has been signed into law over the past 80 years that has protected the middle class, the elderly, the children, the sick, and the most vulnerable in this country.”

HOW MUCH MONEY ARE THE KOCH BROTHERS SPENDING? A lot. A lot. Here’s how that $889 million compares to what various key elements spent in 2012, according to data compiled by the Washington Post and the New York Times:

This means that, if spending levels were to hold steady into 2016, the Kochs would spend almost 50 percent more than the RNC and DNC combined and more than each candidate individually.

HOW DOES THE KOCH NETWORK WORK? Now this is where it gets tricky. It’s notoriously hard to get a full understanding of the Kochs’ network—also known as the Kochtopus—because they spread their spending across so many different organizations. In 2010, Meyer wrote, “Tax records indicate that in 2008 the three main Koch family foundations gave money to thirty-four political and policy organizations, three of which they founded, and several of which they direct. The Kochs and their company have given additional millions to political campaigns, advocacy groups, and lobbyists. … Only the Kochs know precisely how much they have spent on politics.”

Their network has only grown since then. Tracking the breadth of the Kochs’ donations is now a Herculean effort, but Mother Jones compiled a fairly comprehensive list this past fall. The network is highlighted by a few major organizations. Here’s the breakdown.

On the research side, there’s the Cato Institute, a libertarian-leaning think tank that the Kochs founded, and the Mercatus Center, a market-oriented research institution housed at George Mason University, each of which has received an estimated $30 million from the Kochs. The brothers have also bankrolled three groups that have played a central role in the Tea Party movement: Americans for Prosperity, which replaced the Kochs’ old Citizens for a Sound Economy, and which has received an estimated $60 million from the brothers, as well as FreedomWorks and Freedom Partners.

The money the Kochs plan to spend on the 2016 election will likely be spread through these groups—particularly Americans for Prosperity and Freedom Partners—as well as countless other organizations, including dozens of smaller groups representing special interests. But thanks to campaign-finance laws, it won’t even be clear how much of the money comes directly from the Kochs, and how much of it comes from their network of associates and organizations.