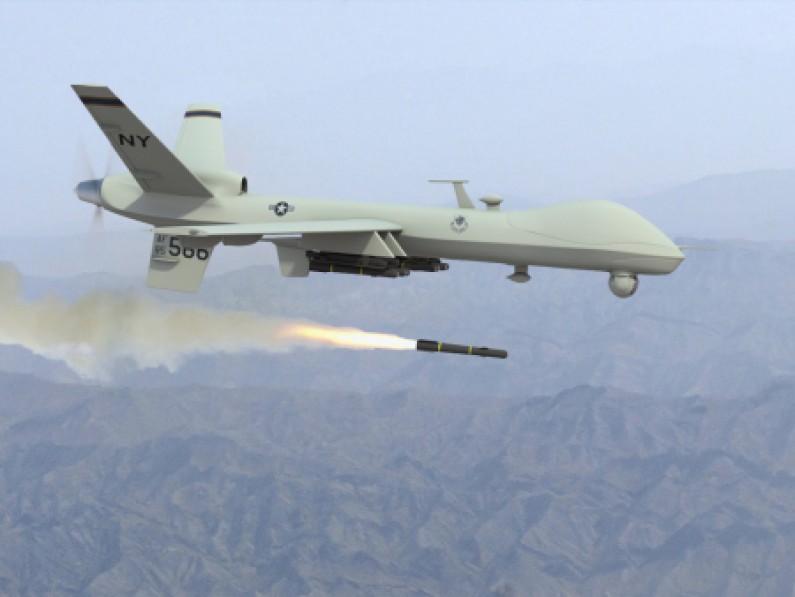 The article below this commentary projects drone growth in America over the next decade or so. 30,000 drones hovering overhead in just 6 short years. Probably triple that by 2030. While I applaud journalism that calls out our government for blatant violations of the Constitution, which occur in legislation that is signed into law almost weekly – I have to wonder how American’s are still surprised this is happening. But, what has everyone been paying attention to?

– Snowden exposes NSA, who sees everything we do on our phones, no real recourse. Can’t get rid of our cells phones without being domiciled as a troll by our peers.

– An Amazon robot drone thing delivered my Christmas gift from my Aunt? Everyone told me how cool it was and how it saved on shipping.

– NDAA and Patriot Act robs us naked of Constitutional protections under the name of terrorism and safety … too many to list.

– London and Europe, whose monetary policy we seem to be following – is peppered with surveillance at every street corner.

– Mayor Bloomberg of NYC says publicly ‘You wait, in five years, the technology is getting better, they’ll be cameras everyplace . . . whether you like it or not’. Sweet.

– In the midst of National Crisis like the Boston Bombing, people’s homes are stormed and looted, stomping the 4th Amendment in a blood search for a ‘suspect’ found guilty under the court of Emotion.

– Obama says surveillance is legal and limited – is 20,000 drones… limited?

These are just a few amongst hundred. To point this out is sometimes taboo, but what do we do?  Change service providers to a smaller, more expensive option? Pay more for shipping? Make weekly calls to our state Senators? These are the decisions we’re going to have to make in a high tech environment when government tracking is masked by ‘what’s cool.’ Wait until the pitch for wearable technology. We’re saying, have an opinion. Start thinking. Prioritize. By no means do I resist innovation – innovation connects us all… it puts strength back in the hands of the greater numbers… the people.

More on the drone-state below and expansion plans below.

Look! Up in the sky! Is it a bird? Is it a plane? It’s … a drone, and it’s  watching you. That’s what privacy advocates fear from a bill Congress passed this week to make it easier for the government to fly unmanned spy planes  in U.S. airspace.

The FAA Reauthorization Act, which President Obama is expected to sign, also orders the Federal  Aviation Administration to develop regulations for the testing and licensing  of commercial drones by 2015.

Privacy advocates say the measure will lead to widespread use of drones for  electronic surveillance by police agencies across the country and eventually by  private companies as well.

“There are serious policy questions on the horizon about privacy and  surveillance, by both government agencies and commercial entities,” said Steven Aftergood, who heads the Project on  Government Secrecy at the Federation of American  Scientists.

The Electronic Frontier  Foundation also is “concerned about the implications for surveillance by  government agencies,” said attorney Jennifer  Lynch.

The provision in the legislation is the fruit of “a huge push by lawmakers  and the defense sector to expand the use of drones” in American airspace, she  added.

According to some estimates, the commercial drone market in the United States  could be worth hundreds of millions of dollars once the FAA clears their use.

The highest-profile use of drones by the United States has been in the CIA’s armed  Predator-drone program, which targets al Qaeda terrorist leaders. But the vast majority of U.S. drone missions, even in war  zones, are flown for surveillance. Some drones are as small as model aircraft,  while others have the wingspan of a full-size jet.

In Afghanistan, the U.S. use of drone  surveillance has grown so rapidly that it has created a glut of video material  to be analyzed.

The legislation would order the FAA,  before the end of the year, to expedite the process through which it authorizes  the use of drones by federal, state and local police and other agencies. The FAA currently issues  certificates, which can cover multiple flights by more than one aircraft in a  particular area, on a case-by-case basis.

The Department of Homeland  Security is the only federal agency to discuss openly its use of drones in  domestic airspace.

U.S. Customs and Border Protection, an agency within the department,  operates nine drones, variants of the CIA’s  feared Predator. The aircraft, which are flown remotely by a team of 80 fully  qualified pilots, are used principally for border and counternarcotics  surveillance under four long-term FAA certificates.

Officials say they can be used on a short-term basis for a variety of other  public-safety and emergency-management missions if a separate certificate is  issued for that mission.

“It’s not all about surveillance,” Mr.  Aftergood said.

The FAA has issued  hundreds of certificates to police and other government agencies, and a handful  to research institutions to allow them to fly drones of various kinds over the  United States for particular missions.

The agency said it issued 313 certificates in 2011 and 295 of them were still  active at the end of the year, but the FAA refuses to disclose which agencies have the certificates and what their purposes  are.

The Electronic Frontier  Foundation is suing the FAA to obtain records of the  certifications.

“We need a list so we can ask [each agency], ‘What are your policies on drone  use? How do you protect privacy? How do you ensure compliance with the Fourth  Amendment?’ ” Ms. Lynch said.

“Currently, the only barrier to the routine use of drones for persistent  surveillance are the procedural requirements imposed by the FAA for the issuance of certificates,” said Amie  Stepanovich, national security counsel for the Electronic Privacy  Information Center, a research center in Washington.

The Department of Transportation, the parent agency of the FAA,  has announced plans to streamline the certification process for government drone  flights this year, she said.

“We are looking at our options” to oppose that, she added.

Section 332 of the new FAA legislation also orders  the agency to develop a system for licensing commercial drone flights as part of  the nation’s air traffic control system by 2015.

The agency must establish six flight ranges across the country where drones  can be test-flown to determine whether they are safe for travel in congested  skies.

Representatives of the fast-growing unmanned aircraft systems industry say  they worked hard to get the provisions into law.

“It sets deadlines for the integration of [the drones] into the national  airspace,” said Gretchen West, executive  vice president of the Association for Unmanned Vehicle Systems International, an  industry group.

She said drone technology is new to the FAA.

The legislation, which provides several deadlines for the FAA to report progress to Congress, “will move the  [drones] issue up their list of priorities,” Ms. West said.