A plane carrying mostly Chinese tourists has crashed into a river in Taiwan, killing at least 23 people.

Dramatic video footage emerged showing the TransAsia Airways plane clipping a bridge as it came down shortly after take-off from a Taipei airport.

The plane, carrying 58 people, has broken up and the fuselage is lying half-submerged in the Keelung River. Rescue efforts are ongoing.

At least 15 people have been pulled out alive, with 20 still missing.

Television footage showed some passengers wading clear of the sunken wreckage and a toddler being pulled out alive by rescuers.

Emergency teams have cut the plane open to gain access, attempting to reach the remaining passengers trapped in the front section of the fuselage.

Mr Wu said the fire department had requested heavy cranes to pull the body of the plane out of the water.

The BBC’s Cindy Sui: says there are still people trapped on the plane

TransAsia said in a statement that one passenger had already been discharged from hospital.

The ATR-72 turbo-prop plane had just taken off from Taipei Songshan Airport and was heading to the Kinmen islands, just off the coast of the south-eastern Chinese city of Xiamen.

It is the second TransAsia ATR-72 to crash in seven months, following an accident last July which killed 48 people and injured 15.

The final communication from the pilots to air traffic control was “Mayday, mayday, engine flame out”, according to a recording played on local media. The recording was not immediately verified by aviation officials.

Yet again, we are looking at shocking pictures of a plane crash. You’d be forgiven for thinking that flying is getting more dangerous, but it’s not. In fact, when you look at the number of crashes and fatalities compared to the huge number of people flying today, we are in a golden era of aircraft safety.

According to safety analysts Ascend, 2014 was narrowly the safest year ever, with one fatal accident per 2.38 million flights, compared to every 1.91 million flights in 2013. That does not include the loss of the Malaysian airliner over Ukraine, where 298 people died, which they count as a war loss rather than an accident.

Nearly a thousand people died in 2014, which is 700 more than the year before. Horrible numbers but compare that to the worst year, 1972, when 2,370 passengers were killed, and there was far less flying then, maybe a quarter of what there is today.

Nothing is ever without risk, but the chances of dying in an aircraft “accident” are lower than ever.

Footage of the plane filmed from inside passing cars showed it banking sharply, hitting a taxi and clipping the bridge before crashing into the river.

“I saw a taxi, probably just metres ahead of me, being hit by one wing of the plane,” an eyewitness told local media.

“The plane was huge and really close to me. I’m still trembling.” 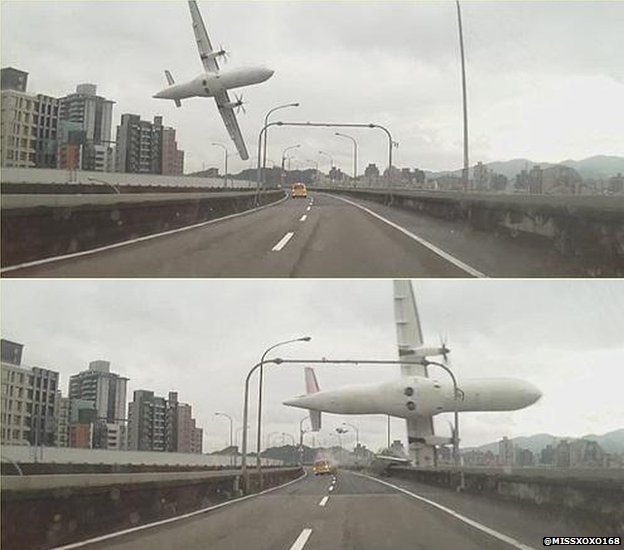 TV footage showed rescuers standing on the tail section of the broken wreckage trying to pull passengers out of the plane with ropes.

The majority of the plane, including the front section of the fuselage and the wings, appeared to be underwater.

The plane’s flight data recorders, also known as black boxes, have been recovered.

Jaime Molloy, an English teacher who has lived in Taipei for three-and-a-half years, works near the scene of the crash.

Mr Molloy, who is originally from Berkshire, told the BBC: “The most disturbing scenes I saw were the debris, which included carry-on luggage and personal affects, as well as parts of the plane.” 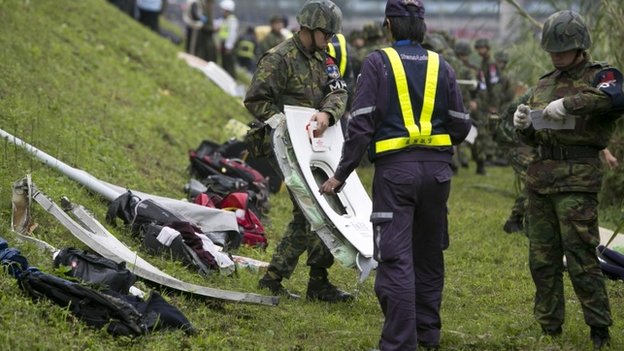 The military is helping in the rescue effort 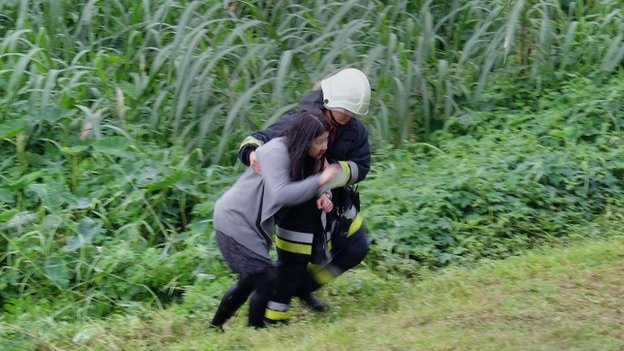 TransAsia said it had contacted relatives of all the 22 Taiwanese passengers and was attempting to reach relatives of the Chinese nationals on board.

The BBC’s Cindy Sui in Taipei says the Chinese tourists could have been on their way home as many people come to Taiwan through Kinmen island.

TransAsia chief Chen Xinde offered a “deep apology” in a televised news conference, but said his planes had been “under thorough scrutiny” since mid-2014.

“Both our planes and our flight safety system are following strict regulations, so we also want to know what caused the new plane model to crash, but I don’t want to speculate,” he said.