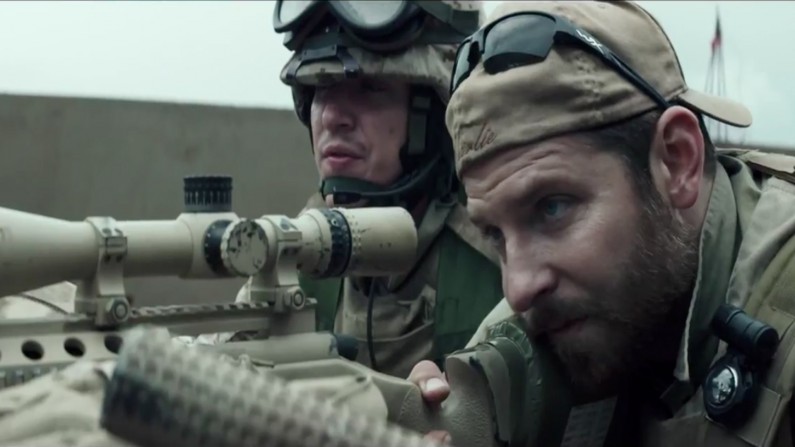 VIA “indiewire.com” by Negin Farsad What does Clint Eastwood’s war drama tell us about our relationship with guns? It isn’t a pretty picture. Clint Eastwood’s latest film “American Sniper” says a lot about America – there are hints of home-of-the-brave, sprinklings of let’s-show-‘em-how-its-done, and a generous helping of America-fuck-yeah! It is, after all a movie about a hero. Navy Seal Chris Kyle fought for his country in multiple tours in Iraq and was, by every measure, a great American patriot. But what are those measures? What metrics are we using for patriotism and what does it say about us? The film itself is expertly directed – as many legit critics will tell you – but it was the experience of watching the movie, in a packed theatre, with other red-blooded Americans like myself, where the fear crept in. Chris Kyle was – spoiler alert – a sniper. He was very good at it and they called him “The Legend” for how well he was able to shoot. When Kyle managed to kill his last target, the audience erupted in cheers. Loud cheers. I squirmed. Cheering the death of another human being seemed…a little gross. Do I love my country less because I’m uncomfortable cheering the death of another man? I don’t, but as I write this, I worry that even questioning our construct of patriotism will get me on some kind of turncoat hit list. The movie does a great job of giving us a running tally of exactly how many people Kyle killed. His final count – 160 confirmed kills – is repeated and lauded throughout the film by colleagues, friends, and family. There was no sugarcoating it either – no one said, “You’re a legend for how much you fight for democracy.” No, the naked language of “confirmed kills” is what produced the admiration. Maybe confirmed kills should not be the metric by which we define patriotism? Maybe because we celebrate these kinds of confirmed kills, we’re at a loss for how to handle the other kind of confirmed kills, the kind the police brought us in Ferguson or Staten Island?  The police, like the military, are heroes; they put themselves in danger for us. But killing people is the most grotesque part of their jobs. And sometimes, they get it wrong. We’re supposed to offer unqualified support for their valor, but now it seems that maybe that support should have some boundaries. Throughout the film, Kyle never appeared to question his kills, and in our relationship to war and criminal justice, neither do we.

After all, where have all of those confirmed kills in Iraq gotten us? What do we or the Iraqis have to show for the 202,000 (and by some estimates over 500,000) civilian and combatant deaths? The film doesn’t show American officials bumbling through the war effort without any nation-building plans. The American soldiers are infallible. It’s the “savages” on the other side that deserve to die. Oh yes, “savages,” — or alternately, “animals” — is how the people of Iraq, and any Middle Easterner, are referred to throughout the film. Though, to be fair, the savages were using guns to kill just like we were. What does that make us? At this point in our cinematic history, we shouldn’t be depicting large groups of people as two-dimensional savages. That’s “Birth of a Nation”-style ridiculousness. Then there’s the gun issue. The movie loves guns. Guns are the answer to the savage animals, the answer to freedom. Guns are everywhere: on the battleground, around the house, in makeshift shooting ranges. Clint Eastwood himself is a huge fan of guns and like a large segment of our country, no number of mass murders has changed that. (Between 2000-2013, 486 people were killed in mass shootings.) In fact, part of Kyle’s post-war psychological and social rehabilitation is bonding over some good-natured target practice. There’s nothing like the sound of a gunshot to bring someone back to a peaceful emotional state. Like our view of guns in the United States, guns in the movie are shown in only two ways: 1) killing horrible savages that deserve to die, and 2) recreationally. But the moment that Kyle actually loses his own life to a gun – a gun that was left in the hands of a deranged veteran who had just been released from a mental hospital – that moment is not shown onscreen. Because that would mean that guns are anything but totally awesome and necessary. That would have been an admission that guns sometimes fall in the wrong hands, that maybe we should take a closer look at who is able to get a gun in this country. Because guns didn’t make Kyle safer; they made him dead.

Thousands came to the Cowboys Stadium in Dallas for Kyle’s memorial. That makes sense for a person who sacrificed so much. But what about the people who fight Ebola? Do we give them a stadium’s worth of honor, or do we quarantine them? What about the umpteen NGOs who sweep in with food and water, left to clean up the mess of our misbegotten war. Does our patriotism extend to them? What was scary about the movie is the number of things it gets right about America. I want to revere Kyle not because of his confirmed kills or because he wanted to get the savages, but because he believed in some kind of democratic ideal. I want to believe that our international strategic plan makes killing people the last option on the docket. “American Sniper” is a film that does ask us to consider the toll war takes on soldiers, but does not ask us to consider the fundamental destruction of unmitigated jingoism. It reflects an America whose patriotism verges on an irresponsibility that actually abuses the willingness and valor of its soldiers.