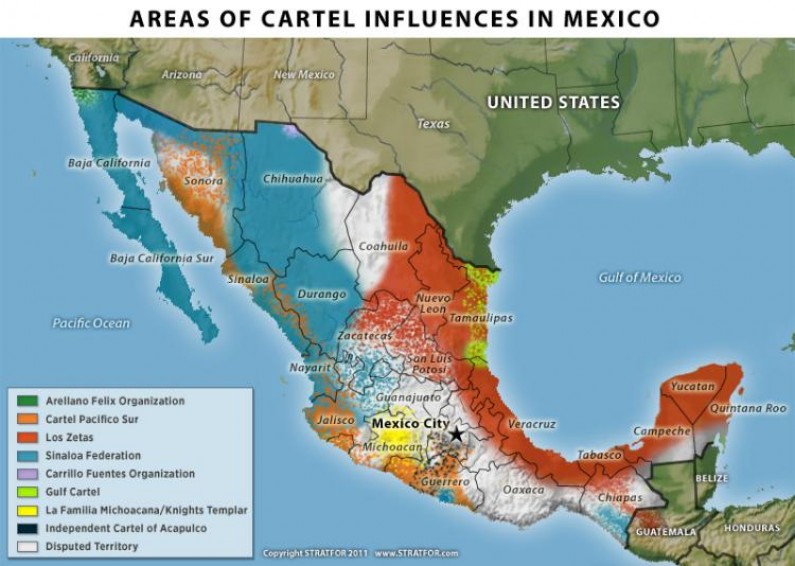 VIA VICE by Mary Emily O’Hara

Marijuana has accounted for nearly half of all total drug arrests in the US for the past 20 years, according to the FBI’s crime statistics. And according to the Department of Justice (DOJ), a large portion of the US illegal drug market is controlled directly by Mexican cartels. The DOJ’s National Drug Intelligence Center, which has since been shut down, found in 2011 that the top cartels controlled the majority of drug trade in marijuana, heroin, and methamphetamine in over 1,000 US cities.

Now, those cartels and their farmers complain that marijuana legalization is hurting their business. And some reports could suggest that the Drug Enforcement Agency (DEA) is more interested in helping to protect the Mexican cartels’ hold on the pot trade than in letting it dissipate.

Seven Mexican cartels have long battled for dominance of the US illegal drug market: Sinaloa, Los Zetas, Gulf, Juarez, Knights Templar, La Familia, and Tijuana. While some smaller cartels operate only along border regions in the Southwest and Southeast, giant cartels like Sinaloa have a presence on the streets of every single region.

The Washington Post reported on Tuesday that pot farmers in the Sinaloa region have stopped planting due to a massive drop in wholesale prices, from $100 per kilo down to only $25. One farmer is quoted as saying: “It’s not worth it anymore. I wish the Americans would stop with this legalization.”

VICE News talked to retired federal agent Terry Nelson, a former field level commander who worked to prevent drugs from crossing the southern border. Nelson said that before medical marijuana and state legalization in Washington and Colorado, about 10 million pounds of pot were grown in the US every year. But 40 million pounds came from Mexico.

Given the DEA’s relationship with Sinaloa, and the agency’s fury over legalized marijuana, it almost seems like the DEA wants to crush the legal weed market in order to protect the interests of their cartel friends. Almost.

Exact numbers on illegal drug trafficking are always hard to pin down, due to the black market nature of distribution and sales.

“Is it hurting the cartels? Yes. The cartels are criminal organizations that were making as much as 35-40 percent of their income from marijuana,” Nelson said, “They aren’t able to move as much cannabis inside the US now.”

Seven important truths about how the world takes drugs in 2014. Read more here.

In 2012, a study by the Mexican Competitiveness Institute found that US state legalization would cut into cartel business and take over about 30 percent of their market.

Former DEA senior intelligence specialist Sean Dunagan told VICE News that, although it’s too early to verify the numbers: “Anything to establish a regulated legal market will necessarily cut into those profits. And it won’t be a viable business for the Mexican cartels — the same way bootleggers disappeared after prohibition fell.”

DEA chief of operations James Capra told senators this January that legalization “scares us” and is “reckless and irresponsible.” And the agency is continuing to crack down on marijuana.

Given the DEA’s historic relationship with the Sinaloa cartel, and the agency’s fury over legalized marijuana, it almost seems like the DEA wants to crush the legal weed market in order to protect the interests of their cartel friends. Almost.

‘I am the person who handed over El Chapo’: A VICE News exclusive. Read here.

“The DEA doesn’t want the drug war to end,” said Nelson, when asked about a possible connection between the agency’s hatred of legal pot and its buddies in Sinaloa. “If it ends, they don’t get their toys and their budgets. Once it ends, they aren’t going to have the kind of influence in foreign government. I’m not a conspiracy theorist, but where there’s smoke there’s probably fire.”

DEA and Sinaloa: A Mutually Beneficial Relationship
The Sinaloa cartel came to prominence in January when the “Fast and Furious” scandal surfaced, in which it was revealed that DEA agents ignored Sinaloa drug shipments and essentially granted immunity to cartel criminals in exchange for information.

The decade long relationship between Sinaloa and the DEA was detailed in the court testimony of Jesus Vicente Zambada-Niebla, also known as “El Mayito.” El Mayito, son of Sinaloa leader Ismael “El Mayo” Zambada, told a Chicago court that DEA agents offered him deals in exchange for ratting on rival cartels and Colombian drug lords.

In addition, the lawyer for Sinaloa cartel, Humberto Loya-Castro, told El Universal that DEA agents promised not to prosecute Joaquin “El Chapo” Guzman Loera, whose high-profile arrest earlier this year by Mexican authorities came as a shock to many.

Joaquín ‘El Chapo’ Guzmán captured in Mexico: What you need to know is here.

A 2011 letter from DEA head Michele Leonhart in response to an investigation by the federal oversight committee severely downplayed the agency’s connection to Fast and Furious, stating that it was mainly an operation by the Bureau of Alcohol, Tobacco, and Firearms (ATF) that the Phoenix DEA office assisted. El Mayito’s testimony tells a far different story.

Dunagan was stationed in Mexico for two years working on DEA operations. He didn’t see an obvious connection between the Fast and Furious and the DEA’s US pot crackdown, but he did say that handling informants is “a really messy business.”

‘Technically, a DEA agent could still walk into any marijuana dispensary in Colorado and seize the money, and arrest everyone.’

“There is a temptation sometimes to prioritize a certain cartel or informant,” Dunagan said. “And cartels know that. They exploit the relationship to provide information on their competitors. It creates these perverse incentives — you are investigating what your informant is telling you, not what they are doing.”

DEA Versus Legalized and Medical Marijuana
At a Congressional Hearing on drug policy on April 2, Leonhart and her supporters announced their opposition to both the DOJ and Obama regarding marijuana policy, promising to continue to treat medical and recreational marijuana as a Schedule I illegal drug under federal law despite state legalization in Colorado and Washington.

The fact that pot remains on the federal list of high-priority illegal drugs has complicated state legalization, to say the least. Dunagan said that from a DEA perspective, even marijuana in a state that has legalized it is still illegal under federal law.

“So there’s no such thing as a legal marijuana business,” Dunagan said. “Technically, a DEA agent could still walk into any marijuana dispensary in Colorado and seize the money, and arrest everyone.”

How the geek of Mexico’s bloodiest cartel revolutionized the drug trade With walkie-talkies. Read exactly how here.

So why doesn’t the DEA rush into the Rocky Mountain state and bust everyone? Because the president doesn’t want them to. Sort of.

Obama has been called “schizophrenic” by Congress in regards to his waffling policy on marijuana. In January, the president told the New Yorker it was “important for [legalization] to go forward” in Washington and Colorado.

“Why, as a matter of policy, they continue to pursue it is another question. I think it’s ideological. The majority of the agency perceives it as a moral crusade: drugs are bad, and it’s my duty to stop them,” said Dunagan, who now works with Law Enforcement Against Prohibition, a non-profit association of criminal justice professionals that oppose the drug war and favor legalization.

Only in the Netherlands Do Addicts Complain About Free Government Heroin. Read more here.

Another way the DEA tries to shut down legal marijuana dispensaries, and medical marijuana clinics, is through the banks. While large banks like HSBC and Wachovia have gotten away with laundering billions in cartel drug money, famously referred to as “too big to jail” by Attorney General Eric Holder, banks have been meticulously instructed by the DEA not to work with any kind of marijuana facility.

That’s pennies compared to what the US spends on the drug war. According to the Drug Policy Alliance, we spend $51 billion per year fighting illegal drugs. A 2010 study by Harvard economist Jeffrey Miron found that not only would the US save tremendous amounts of money were it to end drug prohibition, legalizing could bring in an additional $46.7 billion in yearly tax revenue.

“We’ve spent 1.3 trillion since 1972 on the drug war. What have we gotten for that? Drugs are cheaper and easier to get than ever before,” Nelson told VICE News.