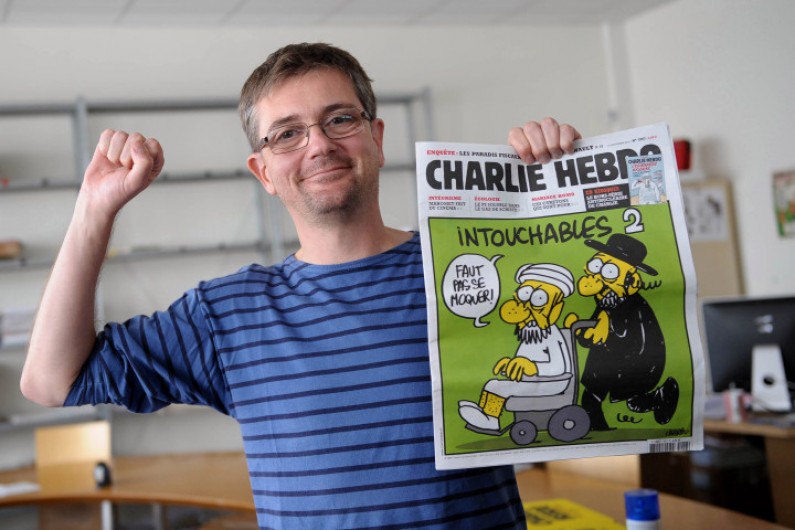 VIA “Bloomberg.com”, by Angeline Benoit and Helene Fouquet

Charlie Hebdo plans to publish a million copies of the satirical magazine known for its unapologetically irreverent cartoons on Jan. 14, after eight of its journalists were massacred this week by gunmen.

In what would be an act to show that “we can’t let them win,” the weekly will publish with the help of other French media organizations nearly 17 times its normal print run, its lawyer Richard Malka said on France Info radio today. The magazine, which has a circulation of 60,000, will have eight pages instead of the usual 16.

“Confronted with horror, Radio France, Le Monde and France Televisions will provide Charlie Hebdo and its staff the human and material means it needs to continue,” they said today in a joint statement. They called on other media to help.

An attack on the magazine by suspected Islamist assailants yesterday left 12 people dead, including Cabu, Honore, Tignous, Wolinski and Charb, the five best known cartoonists at the weekly. Famous for its biting commentary and cheeky — often offensive — cartoons, Charlie Hebdo had earlier in the day tweeted a cartoon of an Islamic State emir.

“It’s going to be hard to continue,” Patrick Pelloux, a columnist at Charlie Hebdo, said in an interview on iTele today. “We must not give up,” he said, breaking into tears.

France is on maximum terrorist alert after the assault yesterday. Thousands gathered across cities in France last night to show support and express grief. Two of the three suspects remain at large. The third turned himself in.

Le Canard Enchaine, another satirical newspaper, said it will help Charlie Hebdo survivors to continue working, “whether the barbarians like it or not.”

A campaign dubbed “Je suis Charlie” — “I am Charlie” – – is circulating on social media, echoing the headline published by Le Monde after the Sept. 11, 2001, terror attacks in the U.S.: “We are all Americans.”

At least 5.7 million Twitter messages using the hashtags #JeSuisCharlie and #CharlieHebdo have been published since the attack, among the most used hashtags in the world. The words are also the home page of Charlie Hebdo’s website.