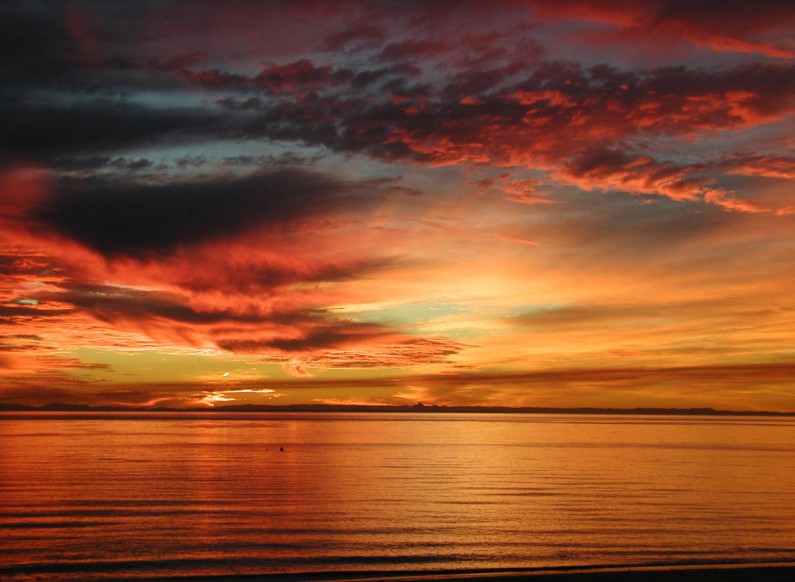 VIA “thespiritscience.net” by Jocelyn Daher

I was fifteen years old at my best friend’s house, she had her family over for dinner. I was munching unassumingly on a salad, when the older man sitting across the table looked at me and said, “ I can see people’s Auras.”

Coming from your typical American family, I had no idea what Auras were so of course I had to ask,” What are Auras?” He told me Auras are an energy field that radiates from the different chakras or energy centers from within a person and then surround each person with what some can see as a visible color halo. If you focus enough you can see this halo of these colors a few inches from the person’s body. Kind of like if you would squint your eyes when someone is in front of you their outline would double. I asked him how he began seeing these colored energy emissions? He said that he had gone to visit his brother one night, his brother was into taking heavy drugs. When he had arrived at the front door of his brother’s house his brother hallucinating that he was a robber, accidentally shot him from a few inches away with a shotgun. His torso was immediately torn to pieces, he fell to the ground and went into shock where he blacked out. He said he remembers ascending into the afterlife but that is a story for another time. After a journey through the spirit kingdom, he was told by a white omnipresent being that his time wasn’t done on Earth and sent back into his earthly body.

When he awoke, he looked down and he had colostomy bags in place of where his intestine used to be. The doctor came into his room shortly after to explain to him that he would only have a couple of months to a year to live. In that moment he knew what he had to do, return to nature. When he was released from the hospital and well enough to walk, he would drive four hours away to the North Carolina Mountains to his favorite trail, very slowly climb to the top and sit on the ground just in time for the sunset. One day when he was sitting on the edge of the mountain top, just as the sun had started setting behind the trees; he started to see an aura coming from the treeline. He squinted and stared at this afterglow illuminating the trees and when he did this the aura seemed to fractalize, turning into tiny particles that were being absorbed through his eyes into his being. He started to breathe in a rhythmic fashion and he could feel that this energy was there to facilitate his healing journey.

This man then continued to tell me that the beauty of our interconnection to nature was ignited and started work in his life. It was as if the forest itself began talking to him. He said from an energy alchemist perspective, he knew this material was a purification tool. That all he would need to do was psychically drink this energy in through his eyes and he would fully recover. He said the energy of the forest was a part of pure God consciousness, it was not tainted with negative thoughts like the minds of humans that hinder the intuitive ability for nature to heal itself. By tapping into this light vibration, he was letting the forest communicate with each of his cells to rebuild themselves. The earth provides physical nutrients for the body to consume, the trees filter pure oxygen for us to inhale and again the forest offers us light synthases from the sun to cleanse our auric layer; like the moon cleanses a crystal in it’s reflection.

Here is this light absorption, auric cleansing and chakra balancing formula in 4 steps:

Keep in mind that this practice is different for everyone, that everyone who has tried this energy exchange has different results. Some just see the white light, some see it materialize in tiny bead like orbs that float toward you, some see these orbs turn colors and there are others with a extremely different experience altogether. But as a testament to it’s authenticity, the man I mentioned above that was communicated this healing exercise has lived over thirty years now. Not only did he live passed the time frame from what the doctor recommended but his intestines almost fully regenerated, he can now eat normally with no medical intervention. The Native Americans have a folklore that tells that for every ailment on this planet there is a plant being to heal it, all you have to do is go in nature and ask your healing and they will show you the way.

Have you had any healing experiences with being an energy alchemist in nature? If so share your story below.  Also if you choose to do the exercise above and feel inclined share your experiences below, I would love to hear your commune with Great Mother!

Hi everyone, my name is Jocelyn Daher and I am a team member and writer for Spirit Science. I have been a herbal healing alchemist ever since I was old enough to pretend I was the Dr. Quinn Medicine woman equivalent. I am into studying astrological charts as well as how astrology relates to current events. I was a chiropractic assistant for two years, within that time I received my yoga teacher certification, which now I use as a bookmark but I acquired some neat information on how to direct and play with energy in my body. I see every person as an extension of my family. My passion is reminding humanity how to love, in hopes to ignite the memory that you are in fact a walking embodiment of universal perfection! Did you resonate with this article? If so check out my website at www.jocelyndaher.com <3