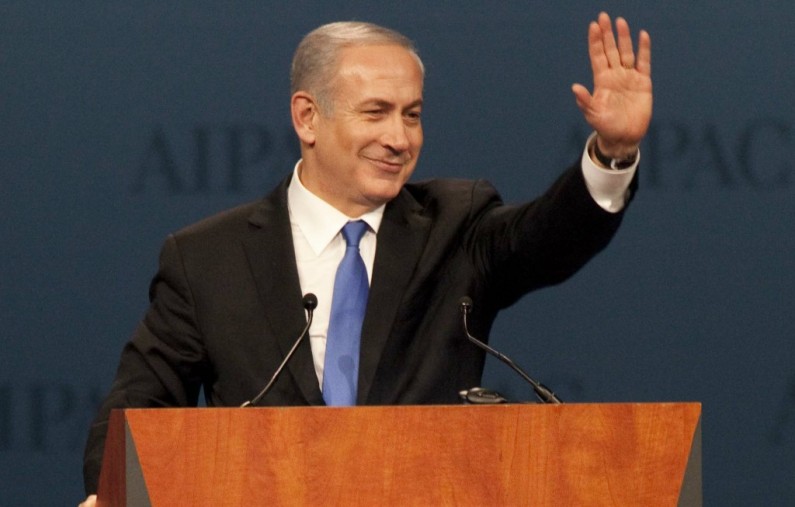 VIA “Bloomberg.com” by Jonathan Ferziger. Video VIA “IsraeliPM” youtube channel

He says the U.S. disagrees with Israel on how to stop Iran from obtaining a nuclear weapon.

(Bloomberg) — Israeli Prime Minister Benjamin Netanyahu said he will tell U.S. lawmakers that he has “a moral obligation to speak out” against an Iranian regime that threatens to destroy Israel.

The speech he will give to a joint session of Congress on Tuesday isn’t intended “to show any disrespect to President Obama or the esteemed office that he holds,” Netanyahu told the American Israel Public Affairs Committee in Washington on Monday. “I have great respect for both.”

The Israeli leader will use the congressional address to explain why he’s trying to sink a potential Iran nuclear deal in a direct challenge to President Barack Obama. Netanyahu accepted an invitation to speak from Republican House Speaker John Boehner without consulting the White House, exacerbating tensions between the American and Israeli leaders.

“The days when the Jewish people are passive to the threats of annihilators—those days are over.”
Prime Minister Benjamin Netanyahu

U.S. National Security Adviser Susan Rice, who has called the visit to Congress “destructive,” is scheduled to speak to Aipac, the largest U.S. pro-Israel lobbying group, later in the day.

“The days when the Jewish people are passive to the threats of annihilators — those days are over,” Netanyahu said.

The Israeli leader was enthusiastically received by an audience of about 16,000 Aipac members in a vast hall lined with giant video screens at the Washington Convention Center. The speech, effectively a pep rally before the address to Congress, resembled a political convention without the balloons.

“Reports of the demise of the U.S.-Israeli relationship are not only premature, they’re just wrong,” Netanyahu said.

Netanyahu knows enough about compromises that have been made in negotiations between Iran and world powers to conclude that a deal would threaten the Jewish state’s security, according to an official traveling with the prime minister who asked not to be named because of the trip’s diplomatic sensitivity.

The prime minister will tell lawmakers how the evolving accord falls short and urge them to press for a delay in a deadline at the end of this month to agree on the framework for a deal and to change an eventual agreement if they aren’t satisfied with it, the official said.

Obama administration officials have said any attempt by Congress to intervene would wreck chances for an accord, and the president would veto such a measure.

“We are concerned by reports that suggest selective details of the ongoing negotiations will be discussed publicly in the coming days,” Secretary of State John Kerry told reporters today in Geneva. “I want to say clearly that doing so would make it more difficult to reach the goal that Israel and others say they share in order to get a good deal.”

Kerry resumed one-on-one talks on a nuclear deal on Monday in Montreux, Switzerland, with Iran’s Foreign Minister Javad Zarif. The talks, through Wednesday, came as Iranian leaders made statements readying their nation for a resolution to the decade-long dispute.

“The negotiators have never been closer to the finish line,” said Ali Vaez, an Istanbul-based senior analyst with the International Crisis Group. “There is as much evidence that leaders in Tehran and Washington are paving the ground for a deal as there is for Mr. Netanyahu trying to derail it.”

A bipartisan group of U.S. senators introduced legislation last week that would give Congress the power to review any agreement that the U.S. and five other nations reached with Iran to curb its nuclear program in exchange for easing economic sanctions.

The measure offered by Robert Corker of Tennessee, the Republican chairman of the Senate Foreign Relations Committee, and Robert Menendez of New Jersey, the committee’s top Democrat, would delay any easing of sanctions on Iran for as long as 60 days. Under the bill, sanctions relief would remain prohibited if Congress voted against an Iran agreement and then overrode an expected veto by the president within the 60 days.

Netanyahu’s opponents in Israel have said his Washington trip is aimed at bolstering his standing before Israelis vote March 17 whether to give him a fourth term, and the White House has said Obama won’t see him during this visit because it’s so close to election day.

Netanyahu in the past has threatened Israeli airstrikes to thwart Iran, though it would take U.S. military capabilities to do more than delay an Iranian effort to develop nuclear weapons.

The U.S. and allies say Iran is seeking the capability to build nuclear weapons. The Islamic Republic says its program is purely for peaceful, civilian purposes.

Even as the Iran dispute festers, U.S. Ambassador to the United Nations Samantha Power told Aipac that the U.S. has a bedrock commitment to Israel’s security and will never let the Jewish state be threatened by a nuclear-armed Iran.

“We believe firmly that Israel’s security and the U.S.- Israel partnership transcends politics, and it always will,” she said, speaking before Netanyahu.

In Geneva, Kerry took an opportunity to showcase U.S. support for Israel, defending it before a UN group that’s often hostile to the Jewish State.

Kerry told a conference of the UN Human Rights Council, the world body’s top human rights group, that its “obsession with Israel actually risks undermining the credibility of the entire organization.”

“We will oppose any effort by any group or participant in the UN system to arbitrarily and regularly delegitimize or isolate Israel, not just in the HRC but wherever it occurs,” he said.

To contact the reporter on this story: Jonathan Ferziger in Washington at jferziger@bloomberg.net

To contact the editors responsible for this story: John Walcott at jwalcott9@bloomberg.net Larry Liebert, Michael Shepard