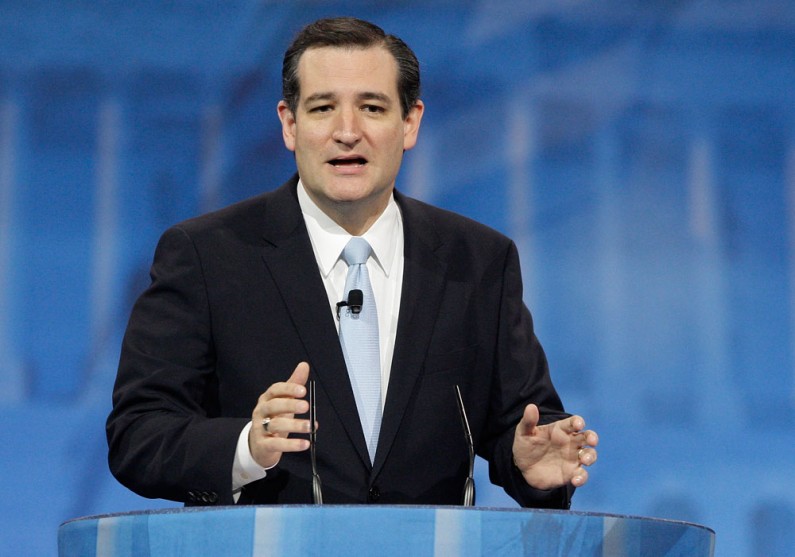 Sen. Ted Cruz (R-TX) is now apparently undecided how he’ll buy insurance, backing away from his Obamacare announcement earlier in the week. Either way, Cruz is a master at what Al Franken used to call “weasel words” — talking points that are carefully constructed to sound legitimate but really aren’t at all. Come to think of it, Stephen Colbert famously referred to this sort of thing as “truthiness.” Cruz is especially on his game when the topic of the complicated Affordable Care Act comes up because even top-shelf reporters don’t quite grasp all of the ins and outs of Obamacare and, frankly, the administration hasn’t been very strong at educating the public about what the law covers. And Cruz is exploiting every square mile of this supercolossal Obamacare ignorance gap.

For the last two days or so, Ted Cruz has repeatedly said that 1) as a member of the Senate, he’s required to have an Obamacare policy, 2) in spite of this requirement he was on his wife’s insurance policy until just recently, and 3) Congress is exempt from Obamacare because of an illegal move by the president. So, Obamacare is mandatory now, but it wasn’t before, and it’s actually not any more because of the allegedly “illegal” Obama exemption.

On Wednesday, Cruz sat down with a reporter from an outfit called The Daily Signal and delivered this troika of nonsense once again.

1) First, Cruz again described how for two years he’s been on his wife’s insurance — not an apparently mandatory congressional Obamacare plan.

When I announced the campaign, my wife also decided to take an unpaid leave of absence from her job. We have been for the past couple of years covered on my wife’s health insurance. When she took an unpaid leave of absence, it means that she’s also losing her benefits. And so we’re gonna do what anyone else would do, which is take their health insurance from their employer. So, in all likelihood, we’ll go on the exchange.

2) After discussing so-called “Obama subsidies,” Cruz then described why Obamacare is a requirement for members of Congress.

Iowa Senator Chuck Grassley introduced an amendment to Obamacare that said members of Congress have to be on the exchanges with no subsidies just like millions of Americans.

So, the “amendment” stipulates that members “have to be on the exchanges with no subsidies.” When he first mentioned this to CNN’s Dana Bash on Tuesday, he said it was “one of the great things about Obamacare.” Then why is he still not on the exchange? It’s because members of Congress really don’t “have to” use Obamacare — unless they choose employer-based health insurance from the government. If they do, the government’s plan is now the Healthcare.gov exchange rather than the Federal Employees Health Benefit Program. If members and staffers don’t want employer coverage, they can buy a plan directly from a provider or go without insurance. On top of all that, there’s absolutely nothing in the Affordable Care Act that says Congress isn’t permitted to receive subsidies or premium-sharing. Nothing. Cruz lied.

3) Next, even though he said he plans to follow the law (he hasn’t for two years now, but okay) which he claims features an Obamacare requirement, he goes on to say that Congress doesn’t have to use Obamacare after all because the White House carved out an exemption for Congress.

Now, Harry Reid and the Senate Democrats when this passed were horrified. They didn’t wanna be under Obamacare. They went to Obama and said, “Give us a special exemption.” And Barack Obama did, and his administration ignored the plain text of the statute and created an illegal exemption. I have no intention of using that illegal exemption. I’m gonna follow the law.

Inexplicably, he wants viewers to think Congress is no longer mandated to be on Obamacare (it never was) — that Congress has an “illegal” waiver to get around Grassley’s amendment. In fact, the spirit of Grassley’s language is still intact and in effect. The “exemption” is, in reality, the Office of Personnel Management’s decision to continue to cover 72 percent of the premium costs for Congress and its staffers — just like both the government and private businesses alike always have. There was no “plain text of the statute” to ignore because, to repeat, there’s nothing in the law that says Congress can’t have a premium sharing employer benefit.

While we’re here, let’s get to the bottom of who lobbied the administration for this so-called “exemption.” Politico reported that it was a collaboration between Harry Reid and Senate Democrat John Boehner. Wait. Boehner’s not a Senate Democrat like Cruz said. He’s the Republican Speaker of the House. It was a completely bipartisan move that included both the White House and congressional leaders. Let’s clear another thing up. Grassley merely proposed an amendment that failed. The Democrats later resurrected and adapted the idea and wrote it into the body of the law. Grassley only deserves partial credit for the rule, since it was ultimately a Democratic decision.

So suddenly the media goes, “Hahahaha! Gotcha!” Because Cruz is now signing up for Obamacare. Listen, I have zero intention of take any government subsidy or Obama subsidy. Rather, what I’m gonna do is pay on the marketplace for health insurance for my family, just like millions of Americans.

Well, he won’t get a subsidy because he earns significantly more than 400 percent of the Federal Poverty Level — the upper limit to receive premium subsidies. Notice, though, that he didn’t say “premium sharing” or “cost sharing” or “employer contribution.” He said “subsidy.” Why would he go on the Obamacare exchange, a politically dangerous move, other than for the better deal: comparable benefits and continued employer premium sharing, just like his wife’s old plan? If he intends, on the other hand, to pay his premium dues entirely out-of-pocket without any premium sharing, why didn’t he just enroll in COBRA through Goldman Sachs or buy insurance directly from a provider, sidestepping the political mess he’s in? Obviously because he wants the premium sharing, which technically isn’t a subsidy but rather a employee benefit — just like millions of Americans receive through their employers.

It’s one thing to abide by a law you don’t like, which happens all the time, but it’s another thing entirely to abide by a law you don’t like even though you have numerous alternative options to choose from. Instead, he chose Obamacare, which he hates, and, worse, he clearly plans to accept the premium sharing “exemption” that he keeps saying was an illegal plot by the Senate Democrats. Why is he doing this? Because it’s a fantastic deal and, financially, he’d be insane not to take it. Politically, however, it was a massive blunder. You know why the press is saying “gotcha!” right now? Because Cruz just blindly derped his way into a gigantic bear trap — an unforced error — and now he’s trying to weasel out of it.

Cross-posted at The Daily Banter.