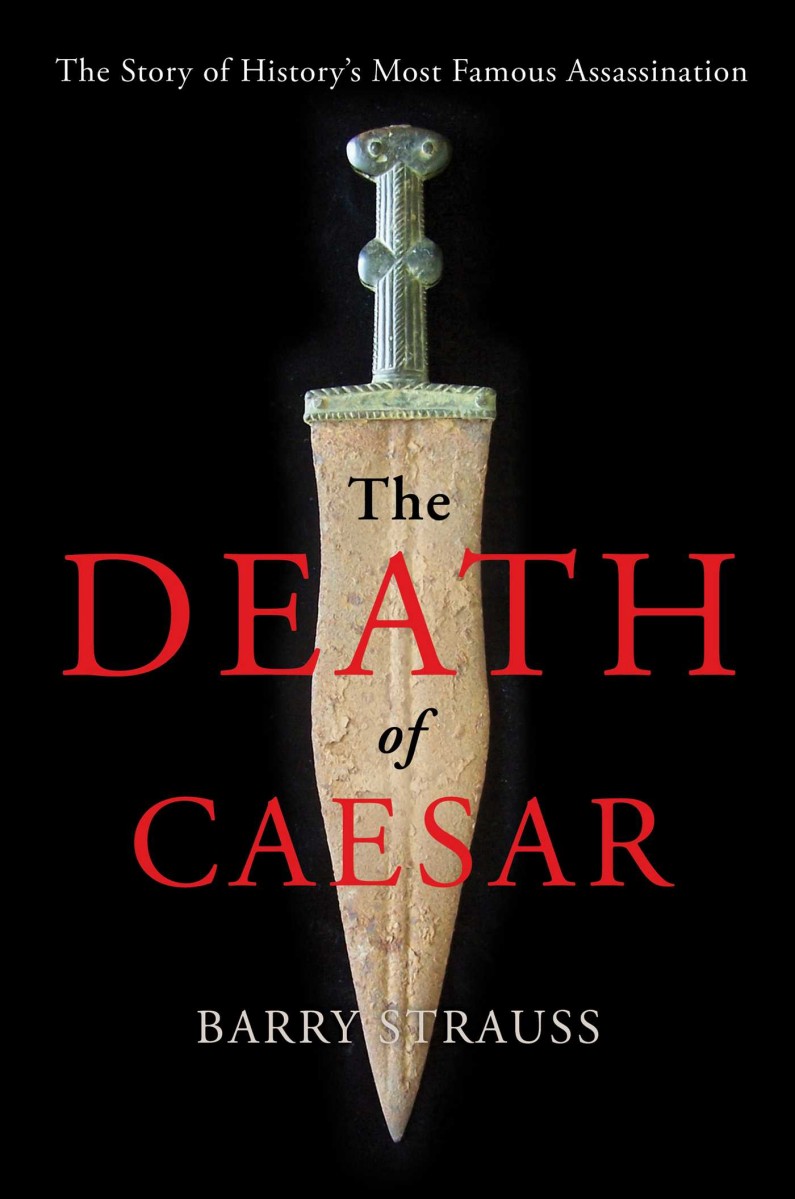 On Feb. 15, in the year 44 BC, Julius Caesar, the all-powerful ruler of Rome, visited a soothsayer named Spurinna, who “predicted the future by examining the internal organs of sacrificial animals,” among other omens.

As per the ritual, Caesar “sacrificed a bull,” and Spurinna “made the chilling announcement that the beast had no heart.”

Brave Caesar was “unmoved,” but Spurinna said that he feared Caesar’s life “might come to a bad end,” and warned the dictator that “his life would be in danger for the next 30 days.”

He did not say anything about the “Ides of March,” just one difference of many between the version of Caesar’s assassination presented by William Shakespeare and the likely truth, according to Cornell University history professor Barry Strauss’ new book, “The Death of Caesar.” Strauss pored through ancient texts to determine the truest possible version of the events surrounding the assassination of the legendary leader.

In 45 BC, Rome was emerging from five years of civil war and policy debates concerned the very nature of the Roman Republic. Caesar had just been declared Dictator for Ten Years by the Roman senate, and sought more.

He believed that the Republic was an entity whose time had come and gone, and that “only his genius offered the people of the empire peace and prosperity.” The Roman Senate, having grown comfortable with their own power, believed otherwise.

Caesar understood how to nurture the love of his people. His soldiers were well-paid, and he passed laws (over the Senate’s objections) helping the poor, including protecting them from abusive government officials.

In time, though, his hunger for power made even longtime admirers squeamish. In early 44 BC, in tribute to Caesar’s recent military victories, the Senate proclaimed him Rome’s Dictator in Perpetuity, and there had long been talk that Caesar sought to be King, an unacceptable occurrence for many Romans. After the obsequious Senate declared that upon his death, Caesar would become “an official god of the Roman state,” the perception became that Caesar was too power-mad for comfort.

Several incidents followed, including one where Caesar was perceived to mock the senators just after they’d voted him honors, that hurt public and senatorial perception of Caesar.

Strauss sees one episode as the final straw. On Feb. 15, Romans enjoyed the annual Lupercalia Fertility Festival, where “after a sacrifice, priests wearing only loincloths ran around central Rome and touched bystanders, especially women, with goatskin straps.”

Caesar sat atop the Speaker’s Platform in the Roman Forum, an 11-foot-high stand he’d use to address his subjects. At one point, Marcus Antonius (Mark Antony), the chief priest of Rome and Caesar’s cousin and longtime compatriot, approached the platform with a crown and placed it on Caesar’s head, proclaiming, “The people give this to you though me.” As the stunned crowd stood silent, Caesar removed it, and “Antony tried again, only to get the same response.” Having rejected the crown, Caesar told the crowd, “Jupiter alone of the Romans is King.”

The reasons for Antony’s actions are unclear — he may have been trying to flatter Caesar, or perhaps convince him to give up his breathless quest for power — but many believed it a test engineered by Caesar himself to preview the people’s reactions should he be made king.

For many, this was the final proof they needed that Caesar’s ambition had turned dangerous. In the eyes of increasing numbers, Caesar had to be taken down.

Decimus Junius Brutus Albinus (Decimus) was a great general and a close friend of Caesar’s who rose in the ranks to become one of the most powerful men in Rome. But in a culture where the concept of “dignitas” — a complex term that meant not just dignity, but also worth, prestige and honor — was the “cherished ideal,” a life spent in Caesar’s shadow rendered Decimus uneasy.

Cassius, a general and senator, had several motives for wanting Caesar dead.

In addition to fearing his ambition, he had been passed over for several high-level positions and faced rumors that Caesar slept with his wife.

When Cassius began to seek out co-conspirators, he found that he could “manage the conspiracy but lacked the authority to lead it.”

For this, he needed Brutus, another high-level military man and politician who came from “one of the oldest families in the Republic,” and had just enough populist appeal to win over the people, thereby increasing the chances that the conspirators would survive the assassination.

As others warmed to Cassius’ conspiracy, they began a “public-relations campaign” to “persuade Brutus to act.” Graffiti began popping up in locations where Brutus worked, reading, “If only now you were Brutus,” “If only Brutus were alive,” “Brutus, wake up!” and “You aren’t really Brutus.”

This, combined with persuasion from Cassius and Brutus’ principled opposition to tyrants, drove Brutus against Caesar.

Decimus was the final piece of the puzzle, since, as “a close friend of Caesar’s,” he was the only one with the ruler’s full confidence.

(In Shakespeare’s “The Tragedy of Julius Caesar,” Strauss notes, Decimus is “misnamed as Decius” and shunted to a minor role.)

The three recruited approximately 60 men to join them, including Caesar supporters who felt inadequately compensated for military victories and were angered by Caesar’s policy of clemency for conquered peoples, as “they wanted to see their former enemies humbled, not raised to equality.”

For security reasons, the conspirators met in small groups in people’s homes and forewent the usual conspiracy ritual of taking pledges over sacrificial animals. They had barely a month to act, as Caesar was leaving for the Parthian War on March 18 and would be surrounded by his army from then on.

They decided to kill Caesar in the Senate House. They felt it would be the safest place, since no weapons were allowed in the Senate, several senators were involved and Caesar’s other friends would not be there to protect him.

On March 15, Caesar was scheduled to attend a meeting in the Senate. The purpose was procedural business, but a rumor was spreading that there would be a proposal to crown Caesar king.

That morning, Caesar’s wife, Calpurnia, woke from a nightmare that saw her husband murdered — probably a result of her recalling the soothsayer’s earlier warning — and begged Caesar not to attend the meeting.

He shared his wife’s bad feelings about the day, especially after telling Spurinna, “The Ides of March have come,” and having the soothsayer respond, “Aye, they have come but not gone.” (The infamous “Beware the Ides of March” was never actually spoken in that form.)

Caesar, fearing the omens, cancelled his appearance in the Senate. The conspirators, then, had to persuade him to change his mind. His close friend Decimus was chosen for the task.

In an ultimate act of betrayal, Decimus, who served Caesar closely for more than a decade and was well-rewarded for his efforts, met with Caesar at his home. He told the ruler that he “should not risk disappointing the Senate, or worse, seeming to insult or mock it.” He convinced the ruler that if he failed to show for the meeting, the senators would look upon him as “a tyrant or a weakling.” He also mocked the soothsayer and the visions of Caesar’s wife, saying, “Will someone of your stature pay attention to the dreams of a woman and the omens of foolish men?”

Decimus’ prodding worked. He had succeeded in luring his dear old friend to his death.

Inside the Senate House, at around noon, Caesar took a seat on his golden throne as his enemies took the stage, having snuck in daggers under their togas or in their slaves’ baskets.

“Some of the conspirators stood behind his chair,” Strauss writes, “while others gathered around him, as if they were going to pay their respects or bring some matter to his attention. They were really forming a perimeter.” Strauss says it’s likely that Caesar was initially surrounded by around 12 men, with more prepared to join a “second wave.”

Once the meeting was underway, Caesar, as per the plan, was approached by Tillius Cimber, a “hard-drinking scrapper” who “had Caesar’s favor,” and presented “a petition on behalf of his exiled brother.”

As he made his point, Cimber “disrespected Caesar by coming up to him with his hands out instead of keeping them humbly beneath his toga. Then, Cimber took hold of Caesar’s toga and held it so tightly that he kept Caesar from getting up.” Finally, Cimber “pulled the toga from Caesar’s shoulder.”

“Why, this is violence!” screamed the enraged leader, who understood all too quickly — and yet, too late — that the omens had been correct.

“As agreed on in advance,” writes Strauss, “pulling down Caesar’s toga was the signal to start the attack.”

Publius Servilius Casca, a friend of Caesar’s and an “experienced killer,” was given “the honor of the first blow.”

Casca swung his knife toward Caesar’s neck, but stabbed him in the chest instead, as Caesar was now thrashing to defend himself. He likely swatted Casca away, but the blows from others were coming too quickly.

Casca’s brother, Gaius Casca, “delivered the second blow, which struck the dictator in the ribs,” and his other attackers descended, encircling Caesar and mutilating his body. Many of the key conspirators got shots in, with Cassius “plant[ing] a slanting blow across the face,” Decimus striking “deep under the ribs,” and Brutus, who himself received a slash across the hand from Cassius in the melee, likely connecting with Caesar’s thigh.

Strauss notes that throughout this, Caesar never cried out, “Et tu, Brute,” proclaiming the phrase a “Renaissance invention.”

It is believed that Gaius Casca’s blow was the fatal one, and that those who thrusted after stabbed Caesar’s dead body simply so they could proclaim their involvement. Caesar likely received 23 stab wounds and died within minutes.

The conspirators immediately hit the streets, seeking public support by denouncing Caesar as a tyrant and boasting of how they’d return Rome to glory as a Republic. So assured were they of obtaining this support that they walked “with their daggers drawn and their hands still bloody.”

But both the public and Caesar’s army were more divided than they’d hoped. Ultimately, Brutus and Cassius went into battle against Caesar supporters Mark Antony and Gaius Octavius (Octavian), with each side having anywhere from 50,000-100,000 men.

Antony captured Decimus, ordering his death, then soundly defeated Cassius’ forces. Cassius mistakenly thought Brutus had been beaten by then as well, and, believing all was lost, had one of his men decapitate him. Brutus, then seeing his own defeat as inevitable, killed himself.

Antony and Octavian divided Rome and its territories between them, and after Antony’s death, Octavian became Caesar Augustus, founder of the Roman Empire.

In time, Julius Caesar would be remembered not as power-hungry but as a great leader, with many Roman rulers after him taking on Caesar as a title. “The German ‘kaiser’ and the Russian ‘tsar,’ ” Strauss notes, “derive from Caesar.

“Far from condemning Caesar as a tyrant, people mourn him as a martyr. Caesar’s genius and his sympathy for the poor live on while his war against the Republic in favor of one-man rule . . . [is] forgotten.”