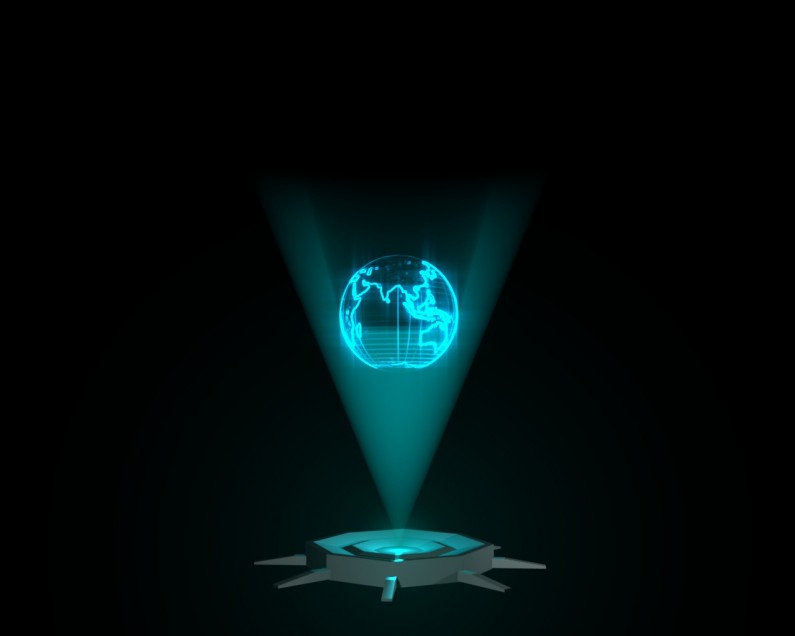 VIA “themindunleashed.org” by Josh Richardson

The Department of Energy’s Fermi National Accelerator Laboratory is completing a unique experiment called the Holometer which has recently started collecting data to answer some mind-bending questions about our universe–including whether we live in a hologram.

Much like characters on a television show would not know that their seemingly 3-D world exists only on a 2-D screen, we could be clueless that our 3-D space is just an illusion. The information about everything in our universe could actually be encoded in tiny packets in two dimensions.

Take a look around you. The walls, the chair you’re sitting in, your own body – they all seem real and solid. Yet there is a possibility that everything we see in the universe – including you and me – may be nothing more than a hologram.

All physical matter, everything we have around us is the result of a frequency. If the frequency is amplified, the structure of the matter will change. This self-contained system is a hologram. Change any one aspect of the hologram, and you change the entire system.

All matter originates and exists only by virtue of a force which brings the particle of an atom to vibration and holds this most minute solar system of the atom together. We must assume behind this force the existence of a conscious and intelligent mind.

Get close enough to your TV screen and you’ll see pixels, small points of data that make a seamless image if you stand back. Scientists think that the universe’s information may be contained in the same way, and that the natural “pixel size” of space is roughly 10 trillion trillion times smaller than an atom, a distance that physicists refer to as the Planck scale.

Theoretical physicists Leonard Susskind and Gerard ‘t Hooft in the past decided to explain the idea: if a three-dimensional star could be encoded on a black hole’s 2D event horizon, maybe the same could be true of the whole universe. The universe does, after all, have a horizon 42 billion light years away, beyond which point light would not have had time to reach us since the big bang. Susskind and ‘t Hooft suggested that this 2D “surface” may encode the entire 3D universe that we experience – much like the 3D hologram that is projected from your credit card.

Theoretical physicists have long suspected that space-time is pixelated, or grainy. Since a 2D surface cannot store sufficient information to render a 3D object perfectly, these pixels would be bigger in a hologram. “Being in the [holographic] universe is like being in a 3D movie,” says Craig Hogan of Fermilab in Batavia, Illinois. “On a large scale, it looks smooth and three-dimensional, but if you get close to the screen, you can tell that it is flat and pixelated.”

“We want to find out whether spacetime is a quantum system just like matter is,” said Hogan. “If we see something, it will completely change ideas about space we’ve used for thousands of years.”

The Holometer team comprises 21 scientists and students from Fermilab, Massachusetts Institute of Technology, University of Chicago and University of Michigan. The science team includes Hogan and Stephan Meyer, who are both professors in astronomy & astrophysics at UChicago.

Quantum theory suggests that it is impossible to know both the exact location and the exact speed of subatomic particles. If space comes in 2-D bits with limited information about the precise location of objects, then space itself would fall under the same theory of uncertainty. The same way that matter continues to jiggle, as quantum waves, even when cooled to absolute zero, this digitized space should have built-in vibrations even in its lowest energy state.

Essentially, the experiment probes the limits of the universe’s ability to store information. If there are a set number of bits that tell you where something is, it eventually becomes impossible to find more specific information about the location–even in principle. The instrument testing these limits is Fermilab’s Holometer, or holographic interferometer, the most sensitive device ever created to measure the quantum jitter of space itself.

Now operating at full power, the Holometer uses a pair of interferometers placed close to one another. Each one sends a one-kilowatt laser beam, the equivalent of 200,000 laser pointers, at a beam splitter and down two perpendicular 40-meter arms. The light is then reflected back to the beam splitter where the two beams recombine, creating fluctuations in brightness if there is motion. Researchers analyze these fluctuations in the returning light to see if the beam splitter is moving in a certain way–being carried along on a jitter of space itself.

“Holographic noise” is expected to be present at all frequencies, but the scientists’ challenge is not to be fooled by other sources of vibrations. The Holometer is testing a frequency so high–millions of cycles per second–that motions of normal matter are not likely to cause problems. Rather, the dominant background noise is more often due to radio waves emitted by nearby electronics. The Holometer experiment is designed to identify and eliminate noise from such conventional sources.

“If we find a noise we can’t get rid of, we might be detecting something fundamental about nature–a noise that is intrinsic to spacetime,” said Fermilab physicist Aaron Chou, lead scientist and project manager for the Holometer. “It’s an exciting moment for physics. A positive result will open a whole new avenue of questioning about how space works.”

A positive result would challenge every assumption we have about the world we live in. It would show that everything is a projection of something occurring on a flat surface billions of light years away from where we perceive ourselves to be. As yet we have no idea what that “something” might be, or how it could manifest itself as a world in which we can do the school run or catch a movie at the cinema.

The Holometer experiment, funded by the U.S. Department of Energy and other sources, is expected to gather data over the coming year. For more information about the experiment, visit http://holometer.fnal.gov/.

Josh Richardson is blogger, healer, and a constant pursuer of the natural state of human consciousness