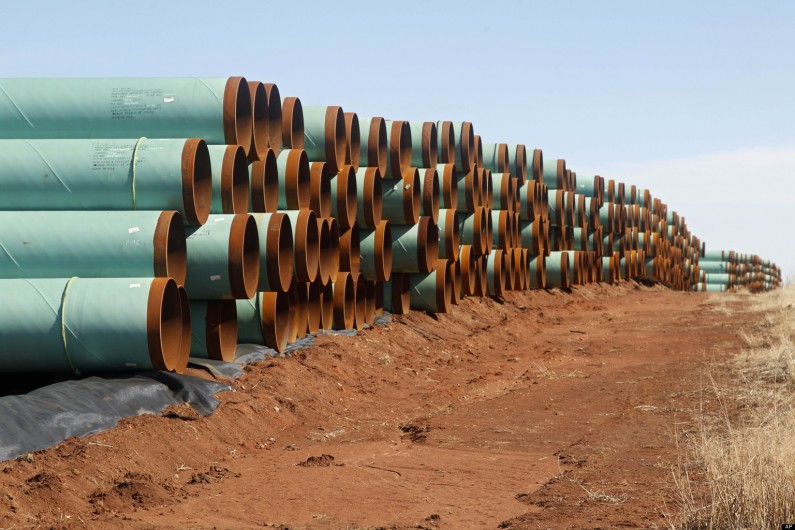 VIA “yahoo.com” by Dina Cappiello

WASHINGTON (AP) — The Republican-controlled Congress cleared a bill Wednesday to construct the Keystone XL oil pipeline, setting up a confrontation with President Barack Obama, who has threatened to veto the measure.

The House passed the bill on a 270-152 vote, endorsing changes made by the Senate that stated climate change was real and not a hoax, and oil sands should no longer be exempt from a tax used to cleanup oil spills.

Only one Republican, Michigan Rep. Justin Amash, voted against the measure, while 29 Democrats backed it. But neither the House nor the Senate has enough votes to overcome a veto, the first of many skirmishes between the Democratic White House and Congress on energy and environmental policy.

Supporters were already strategizing on how to secure the pipeline’s approval using other legislative means.

“The evidence is in. The case ought to be closed,” said Rep. Fred Upton, R-Mich., chairman of the House Energy and Commerce Committee.

Sen. John Hoeven of North Dakota, the chief Republican sponsor of the bill, said in a statement “we will continue to press for approval by attaching an approval measure to another bill, perhaps an energy bill or must-pass appropriations legislation.”

Obama “needs to work with Congress in a bipartisan way and approve the Keystone XL pipeline project for the American people,” he said.

For Republicans, the bill’s passage capped weeks of debate on a top priority after they took control of Congress last month. Hours before the vote, they prodded Democrats who did not take their side. House Republicans, who have debated and passed numerous measures on the pipeline only to have them dead end in the Senate, claimed victory.

Rep. Cynthia Lummis, R-Wyo., said she was a having a “holy cow” moment.

“This kind of support … it doesn’t get any better than this,” she said.

Democrats, meanwhile, called the effort a waste of time but said the provisions on global warming and oils spills marked progress for Republicans on those issues.

Rep. Alcee Hastings, D-Fla., said the bill was another example of Republicans prioritizing legislation to demonstrate a message, regardless of its chances of becoming law. The vote Wednesday marked the 11th attempt by Republicans to advance the pipeline.

“The last few years have been like a hamster on a wheel — spinning and spinning and not getting anywhere,” said Hastings, who at one point held up a toy that looked like the rodent.

First proposed in 2008, the pipeline has come to symbolize the differences between the parties on energy and environmental matters.

Republicans and the oil industry have argued the $8 billion infrastructure project is about jobs and boosting energy security, by importing oil from a friendly neighbor and shipping it to domestic refineries subject to more stringent environmental regulations.

Democrats, and their environmental allies, have characterized it as a gift to the oil industry that would worsen global warming and subject parts of the country to the risks of an oil spill, with little economic benefit because the oil and its refined product would be exported abroad.

A January 2014 analysis found that, with or without the pipeline, the tar sands would be developed, and thus the greenhouse gas emissions resulting from them would enter the atmosphere anyway. But the EPA said earlier this month that that analysis has to be revisited, because lower oil prices could make the pipeline more of a catalyst than the State Department initially predicted. A letter from Canada’s ambassador to the U.S. said the EPA’s assessment was flawed.

Hours before the pipeline vote, Sen. James Inhofe, chairman of the Senate Environment and Public Works Committee, held the first of many hearings on the Obama administration’s plans to control for the first time the pollution blamed for global warming from the nation’s power plants.

And the House plans to unveil a large energy bill next week.

Democrats, too, want to move on.

“This Congress has much work to do on energy,” said Rep. Frank Pallone, D-N.J., the top Democrat on the House Energy committee. Pallone said it was time to stop wasting time on another doomed Keystone bill.

Amash, the lone Republican to vote against the bill, objected to the addition of a Senate bill on energy efficiency, arguing that it further empowered the Environmental Protection Agency.