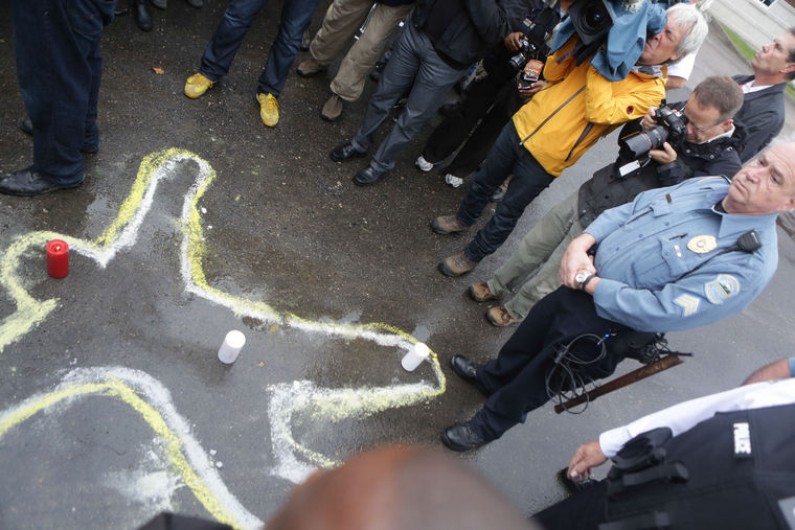 By now we’ve all seen the racist emails from the Ferguson, Missouri Police Department. The Department of Justice report on the rampant abuses and racism emanating from the Ferguson PD noted a few of the most egregious examples of racism found in emails sent from officers in the FPD, including a “joke” about African American abortions being synonymous with the “Crime Stoppers” program.

The racist email suggested that by terminating African American pregnancies, crime would drop. This disgusting line of thinking characterized the patterns of racial discrimination uncovered by the DOJ report on Ferguson. But the officer who wrote that email in particular turns out to be the supervisor of Officer Darren Wilson, the cop who gunned down an unarmed African American teen who he said looked like a “demon.”

The email, back in May of 2011, was sent by Police Sergeant William Mudd: “An African-American woman in New Orleans was admitted into the hospital for a pregnancy termination,” the email read. “Two weeks later she received a check for $5,000. She phoned the hospital to ask who it was from. The hospital said, ‘Crimestoppers.’”

Right after Darren Wilson shot Mike Brown, his first call was to Sgt. Mudd. In fact, Mudd was a key Grand Jury witness in Wilson’s defense, according to the St. Louis American.

After all of that, because of the DOJ report and the uncovered emails, he has been fired. But his testimony was key to exonerating Wilson. So what does that say about the nature of his testimony? For starters, it indicates that if there was racial bias that led to the shooting of Mike Brown, Sgt. Mudd would not reveal it to jurors.

In fact, questioning from Assistant Prosecutor Sheila Whirley, seems to indicate that Sgt. Mudd did lie and embellish for Wilson. It was only during subsequent interviews about the call that Wilson made to Mudd that the Sergeant happened to remember a vivid account of Brown allegedly taunting Officer Wilson, saying that the killer cop was “too much of a p*ssy” to shoot him.

“This is the first time we heard about ‘too much of a pussy to shoot me’,” Whirley explained. When the FBI interviewed him, he left that interesting detail out. Could it be because it is a federal crime to lie to an FBI agent?

“I recalled that since my recorded statement,” Mudd justified. He just forgot, he explained, because he had been “working 12-plus hours a day.”

In fact, Mudd considered it to be nothing more than “stupid questions” to ask Wilson how he might have done anything other than shoot Michael Brown.

“This question is not meant as any disrespect,” Whirley asked, “but your recorded statement you said that, um, you have to ask stupid questions like how this could be prevented?”

“In your recorded statement,” Whirley said again, “you said that you are required to ask officers stupid questions like how could this incident prevented?”

“That’s on the injury report,” Mudd irrelevantly noted, failing to answer the question.

“You feel that’s a stupid question,” Whirley asked once again, “because you feel your officers don’t have any other choice?”

“When you are in that kind of situation?” Whirley said, finishing the sentence.

“When you are physically attacked unprovoked, I believe ‘how could he prevent this?’ is a stupid question,” Mudd said, suggesting that there is never any response other than repeatedly firing a weapon at an unarmed teenager when there is a physical confrontation.

This is the guy who was key to Officer Wilson walking. His testimony exonerated Wilson, and now he’s out of a job because the DOJ proved that he was a corrupt, racist, rogue cop.

Can you say “mistrial”?