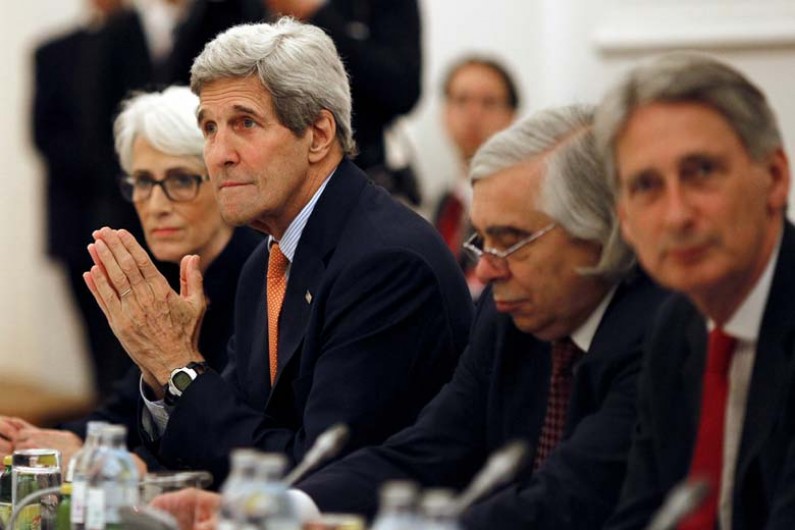 VIA NPR by Eyder Peralta

Iran, the United States and five other world powers have reached a landmark agreement about the future of Iran’s nuclear programs.

The agreement that emerged after years of diplomacy and a final, marathon negotiating session by top diplomats over the past three weeks in Vienna is complex and highly technical.

We’ve been studying the 100-page-plus agreement, and we’ve pulled out six tidbits that will help you understand the deal:

1. It Would Curb Iran’s Nuclear Programs: As President Obama put it in a speech to the nation, the highlight of this deal is that it aims to stop Iran from acquiring a nuclear weapon. In practical terms, it puts limits on many of Iran’s nuclear programs. For example:

— Iran has agreed to turn its Fordow facility into a research center where Iranian and world scientists will work side by side. Fordow, if you remember, has been at the center of international worry, because for years, experts have believed that Iran was enriching uranium in centrifuges there.

Another worry: The facility is located underground, which would make it less vulnerable to a military strike.

2. But It Still Allows Iran To Continue Enrichment: This part of the deal could be seen as a big win for Iran. The country has always maintained that its nuclear program is being used for peaceful purposes and it has always wanted the international community to acknowledge its right to enrich uranium and use it for those purposes.

The deal allows Iran to continue doing just that at its Natanz facility, but the country would only be allowed to enrich uranium to no more than 3.67 percent, which is enough for civilian purposes such as power plants but is much lower than what’s needed for a weapon.

Another big part of the deal is that Iran has agreed to reduce its stockpile of uranium by 98 percent.

As one U.S. administration official, who was briefing reporters on background, put it, Iran currently has 10,000 kg of enriched uranium. The country also has some additional uranium that is enriched at 20 percent.

Under this deal, Iran could keep 300 kg — enriched at no more than 3.67 percent — for the next 15 years. More than likely, Iran will get rid of what it couldn’t keep by shipping it to Russia.

The bottom line: If it honors the deal, Iran would not have the kind of fissile material it needs for a nuclear bomb, but at the same time it does receive a nod from the international community that it can indeed keep a non-military nuclear program going.

3. The U.S. Says The Deal Makes An Iranian Nuclear Bomb More Difficult: Critics of the deal — House Speaker John Boehner and Israeli Prime Minister Benjamin Netanyahu among them — believe that this is a bad deal because it doesn’t entirely dismantle Iran’s nuclear program.

In a speech to the nation, President Obama said that while that is true, this deal extends Iran’s “breakout time” — or the time it would take the country to make enough highly enriched material for a nuclear bomb.

Perhaps the biggest unknown is what happens to that breakout time once some of the terms of this deal start to expire 10 and 15 years from now.

In an interview with NPR after the framework of this agreement was reached, President Obama conceded that “at that point the breakout times would have shrunk almost down to zero.”

But this deal, Obama argued at the time, buys the United States at least a decade.

Ten or 15 years from now, Obama added, “we have much better ideas about what it is that their program involves. We have much more insight into their capabilities. And the option of a future president to take action if in fact they try to obtain a nuclear weapon is undiminished.”

4. If Iran Doesn’t Comply, Sanctions Can Return: The diplomats have been dancing around the language of this part of the deal. The Obama administration, for example, has said this deal includes a “snap back” provision, which means United Nations’ sanctions — the most punishing of the bunch — would be slapped back on Iran if it doesn’t meet its obligations.

But just hours after the deal was announced, Iranian President Hassan Rouhani tweeted: “Upon #IranDeal implementation all sanctions will be lifted—not suspended. Otherwise,there was no need for 18-day round-the-clock #IranTalks“

It’s semantics. Turns out they are both right. The deal lays out a scheme in which if there is a dispute about Iran meeting its obligations, the full U.N. Security Council would “vote on a resolution to continue the sanctions lifting.”

That’s what the U.S. calls a snap back and what Iran calls lifted — not suspended — sanctions.

5. It Sets Up A Comprehensive Inspections Regime: This is a big part of this deal. According to a White House fact sheet, the deal would give inspectors from the International Atomic Energy Agency “extraordinary and robust” access to Iranian facilities. Obama says this would give inspectors access 24/7.

Another administration official briefing reporters on background described the agreement as “a forever commitment to providing enhanced transparency.”

Here’s how the White House fact sheet describes the inspections:

“[The IAEA] will not only be continuously monitoring every element of Iran’s declared nuclear program, but they will also be verifying that no fissile material is covertly carted off to a secret location to build a bomb. And if IAEA inspectors become aware of a suspicious location, Iran has agreed to implement the Additional Protocol to their IAEA Safeguards Agreement, which will allow inspectors to access and inspect any site they deem suspicious. Such suspicions can be triggered by holes in the ground that could be uranium mines, intelligence reports, unexplained purchases, or isotope alarms.”

6. Congress Has To Approve The Deal: Finally, the deal has to be approved by the U.S. Congress. Like most things in Washington, this is setting up to be contentious. House Speaker Boehner has already issued a statement saying he will “fight a bad deal that is wrong for our national security and wrong for our country.”

But, as The New York Times reports, Obama may ultimately come out victorious because of the law governing this particular deal. The paper reports:

“Under the terms of legislation passed in May, Congress has 60 days to scrutinize the accord between Iran and the United States, Britain, France, China, Russia and Germany, and then to vote to accept or reject it — or to do nothing. The president can veto any resolution of disapproval. Congress needs a two-thirds majority in each house to override the veto, so to put the deal into force, Mr. Obama only needs one-third of one of the houses to stand with him.”