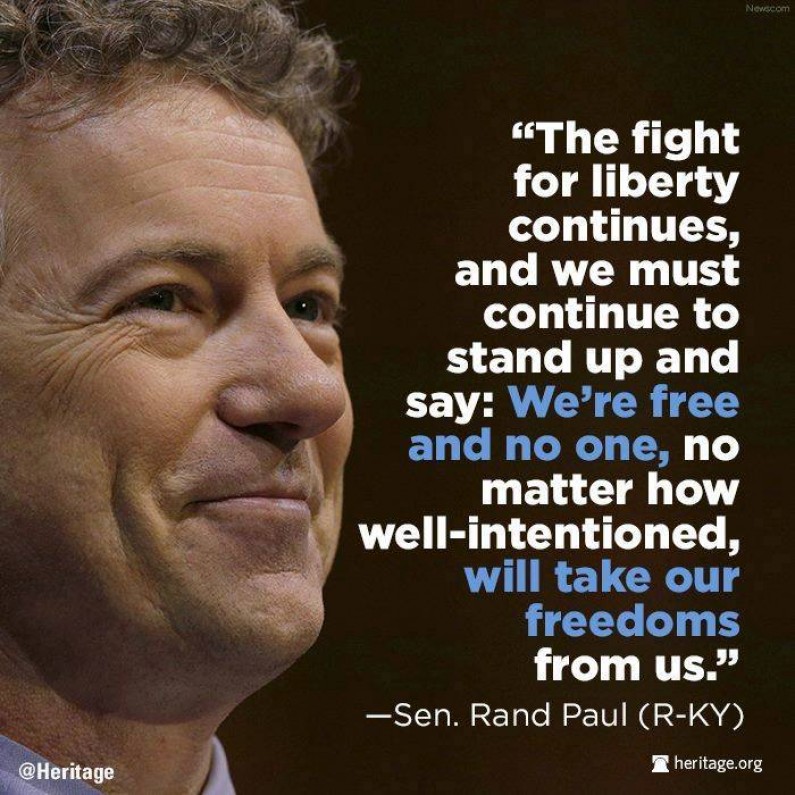 You might have heard that Rand Paul has officially entered the presidential race.

“I have a vision for America,” the GOP senator from Kentucky said, kicking off his campaign in Louisville on Tuesday. “I want to be part of a return to prosperity.”

The announcement surprised no one since Paul has made clear for the better part of the past two years that he was going to run for president in 2016. But his announcement is a nice peg to try to answer this key question: Can he actually win?

The answer, I think, is yes — although to do so Paul would not only need to overcome a crowded and talented field of rivals but also be on the leading edge of a transformation of the Republican Party, the likes of which we haven’t seen in more than three decades.

Let’s start with the purely practical considerations that make Paul either a top tier or a just-off-the-top-tier candidate. Consider:

In his announcement speech, Paul scolded conservatives who “believe a government inept at home will somehow succeed in building nations abroad.” He insisted: “We need a foreign policy that protects American interests and encourages stability, not chaos.” He talked about the deep societal dangers of the National Security Agency’s domestic spying program, insisting that on his first day as president, “I will immediately end this unconstitutional surveillance.”

None of that rhetoric will send the Republican establishment headed for their fainting couches. (Are those still a thing?) But the ideas Paul has espoused that comprise the framework on which that not-all-that-controversial rhetoric sits both: a) do represent a real change in approach for a party who, since at least Reagan, has championed a very muscular foreign policy and b) will become a major point of attack for Paul’s rivals. (To that latter point, an outside group aligned with Republican admaker Rick Reed is set to launch a seven-figure ad buy in early primary states on Tuesday, hitting Paul for his alleged support of President Obama’s position on Iran.)

There’s little doubt that most Republican voters are looking for fresh faces promising change in 2016. That goes double for a race where a member of the Bush clan is running and, to date, not getting the sort of warm welcome from voters that he and his team likely expected. (Sidebar: Jeb is getting a great reception from donors.)  The question for Paul is whether the kind of change his candidacy promises — a non-interventionist foreign policy, domestic policies heavily influenced by the government-needs-to-leave-me-alone mentality of libertarianism — is the both the kind of change and the right amount of change that people are seeking.

What Rand seems to be selling is this: I am different. But, I’m not scary. The battle to be the right kind of change is at the center of Paul’s challenge over the next year or so. If he can sell voters on the idea that the change he represents is the change they need (and want), he might be a real threat to be the nominee. If his rivals effectively cast him as the purveyor of a frightening and/or out of touch vision for America, he will be one of the many castoffs of this crowded race. Chris Cillizza writes “The Fix,” a politics blog for the Washington Post. He also covers the White House.