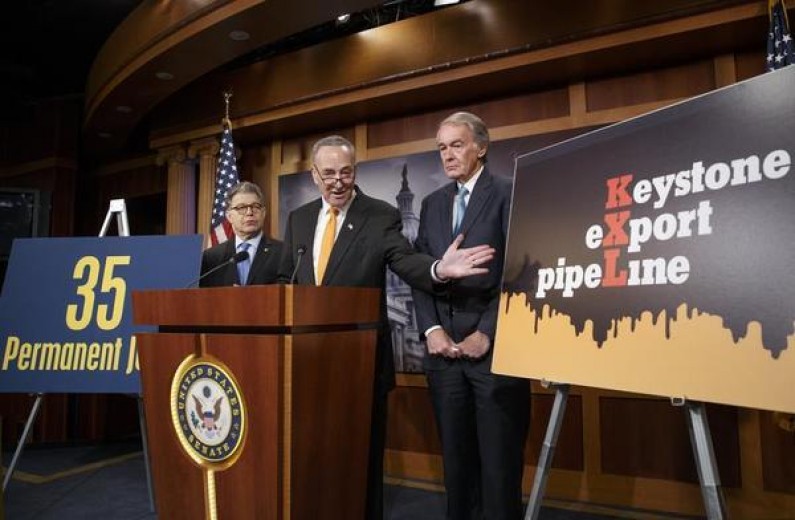 VIA “realclearpolitics.com” by James Arkin

After years of debate, culminating in a messy, amendment-laden process in the Senate earlier this year, a piece of legislation authorizing construction of the Keystone XL pipeline will land on President Obama’s desk Tuesday.

Then, he’ll veto it.

It will be just the third time Obama has vetoed legislation during his presidency, and the first since October 2010. The Keystone measure is one of many bills proposed under the new Republican leadership in Congress that the White House has threatened to veto. And Senate Democrats are confident that they have the president’s back.

The veto will be done quietly, with little “drama or fanfare” surrounding Obama’s dismissal of the measure, White House Press Secretary Josh Earnest said Monday. It’s unlikely that the president’s veto will be public.

Republicans in the upper chamber are still hopeful that Obama will have a change of heart and sign the bill into law, though that outcome has long been highly unlikely. Sen. John Hoeven of North Dakota, the sponsor of the Keystone legislation, announced Monday that it would be sent to the president’s desk and encouraged him to sign it.

“The administration has delayed this important infrastructure project for over six years, despite a series of environmental reviews, all of which conclude that the project will have no significant environmental impact,” Hoeven said in a statement. “It has been more than enough time to make a fair decision on the merits of the project.”

The White House opposes the bill because the administration insists it has authority to greenlight the project, which has been under review by the State Department for years. The plan also faces a number of legal challenges in Nebraska, through which it would pass. Environmental groups are fighting the pipeline, which would carry tar sands oil from Canada to refineries on the Gulf Coast.

Despite Republicans’ best efforts, it appears likely that Democrats will come out on top on the issue that GOP leaders labeled their number one priority. The bill passed the House quickly, but it took the Senate weeks to finally get it done, despite bipartisan support.

Yet even though nine Senate Democrats backed Keystone – as well as 28 Democrats in the House – it fell short in both chambers of the number needed to override a veto. Republican leadership is still debating if and when to bring an override vote to the floor after Obama has rejected the bill. It’s unlikely to happen this week given the Friday deadline to fund the Department of Homeland Security.

When the vote does happen, however, Democrats are optimistic they’ll have the votes to sustain the president’s action.

Sen. Brian Schatz said Monday he is “very confident” that the veto will be sustained, nor is he worried that Democrats voting with the president will be labeled as obstructionists.

“I’m not concerned about that,” Schatz said. “I think they need to move on to energy policy that can actually be enacted into law, and that means that you have to work with both parties in order to do so.”

After the House easily passed the Senate’s version of the Keystone legislation nearly two weeks ago – including added amendments stating that climate change is real – Chuck Schumer, the third-ranking Senate Democrat, said he was very confident a veto could be sustained. “I think the shoe is all on their foot,” he said when asked if he was worried about appearing obstructionist.

Not all Democrats are supportive of the sustain effort, however. Sen. Joe Manchin, one of the nine Democrats who backed the Keystone bill, said before Congress left for recess last week that he hoped the president would change his mind about the pipeline.

“There’s not that many things that come across bipartisan,” the West Virginia lawmaker told RCP. “I would just pray to [the] good Lord the president and the White House look at that and say, ‘You know what, this is one of those things where you’ve got this much bipartisan [support], you’ve got to take it and go with it.’”

Manchin said he had talked to other members, but didn’t think votes would change from where they stood when the legislation passed in January, four votes shy of the 67 needed to overcome a veto.

Sen. Heidi Heitkamp, a Democrat from oil-rich North Dakota who voted for the bill, also said she hoped the president would have a change of heart on the matter. She added that she’s prepared to try to win over the four additional Democrats it would take for an override.

“If this legislation comes back to the Senate, I will continue to reach out to my colleagues to try and garner more of the necessary support to get this project approved,” Heitkamp said in a statement. “However, this is just a small part of what’s needed in this country in terms of energy infrastructure build-out and investment in an all-of-the-above North American energy policy, so I would hope that we can move on soon to tackling these issues in more comprehensive manner.”

Because the bill originated in the Senate, it would need to be overridden first in the upper chamber before making its way to the House, which also fell well short of the two-thirds support needed to overcome a veto. Although Obama has issued a wave of veto threats since Republicans took control of the Senate this year, it’s unclear how many bills will actually reach his desk. Keystone is the first, and it’s possible Obama will have to spend the final two years of his presidency wielding the veto pen much more often than he has thus far. Sen. Debbie Stabenow, a Michigan Democrat, said she isn’t concerned about her party appearing to be the new “party of no,” even if the veto becomes more common and they have to vote multiple times to back up the president.

“We are not choosing to do what [Republicans] did for four years, which is just say no to everything because of politics,” Stabenow told RCP. “When we agree on policy, what’s good for the majority of Americans, we’ll be yes. When they go too far, we’ll stand up and fight.”