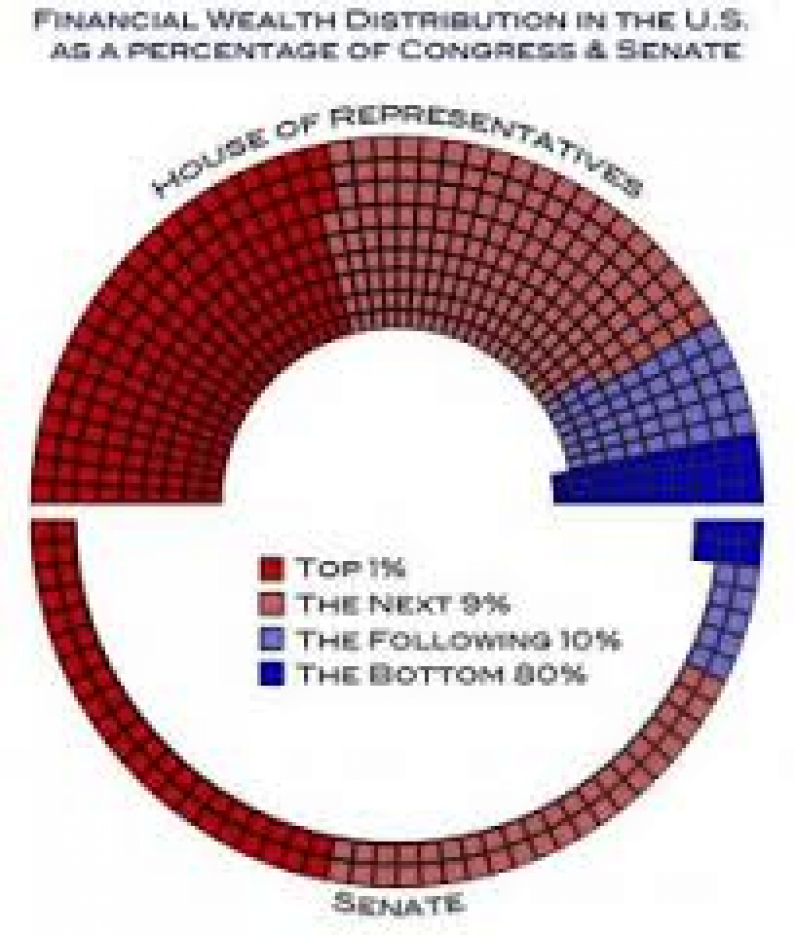 VIA “vox.com” by Dylan Matthews 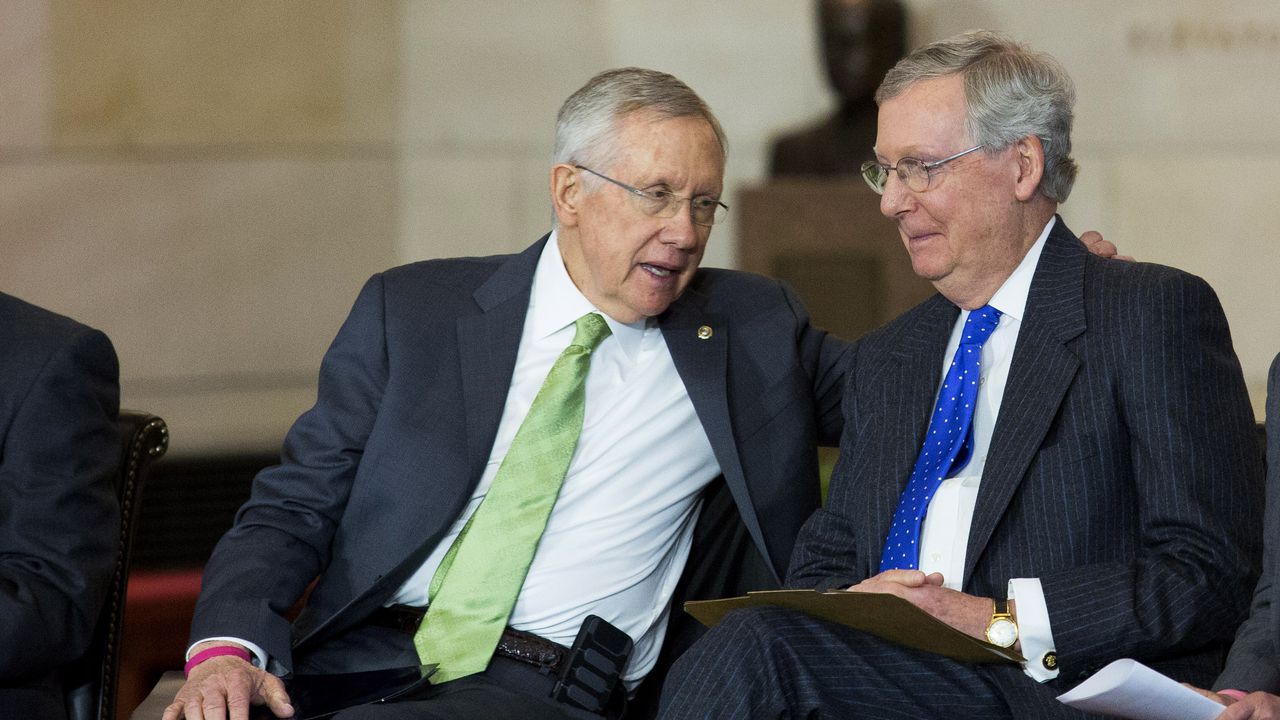 These guys have both led a terribly unrepresentative legislative body. Drew Angerer/Getty Images

On Saturday, I wrote up a startling fact, brought to my attention by the organization FairVote, about American politics. In the new Senate, the 46 Democrats will have received 20 million more votes than the 54 Republicans. Over at RealClearPolitics, Sean Trende has a thoughtful critique. But the strange part is that I don’t think he and I really disagree on the numbers. The disagreement is about what we ought to take away from them.

What the number says — and what it doesn’t 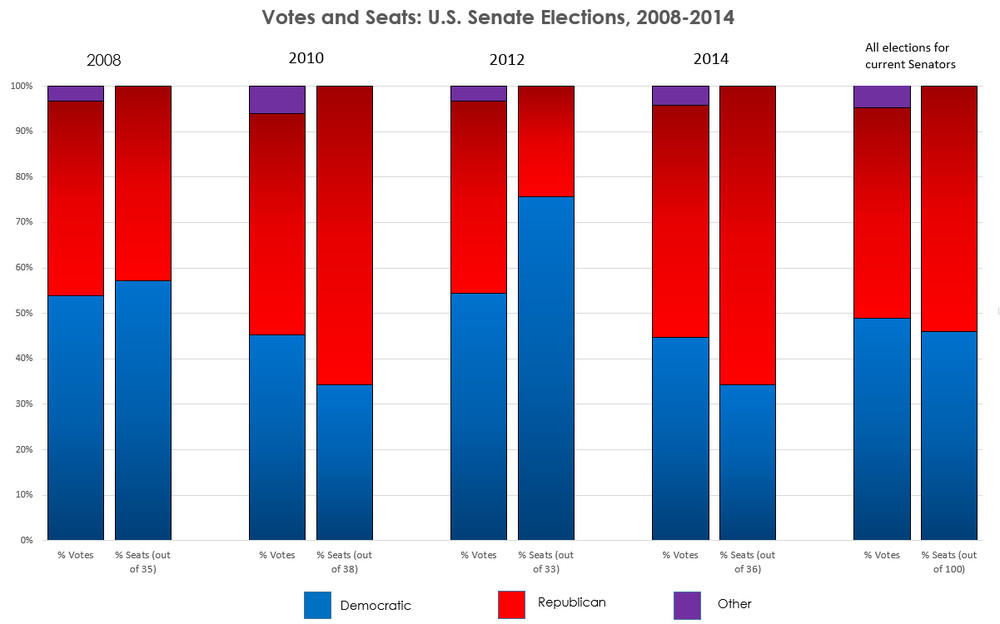 There’s been a bit of confusion on this point, so it’s important, first, to be clear on what the number means, and what it doesn’t mean. It is not the case that 20 million more people voted for Democratic candidates in Senate elections than for Republican candidates. Rather, it means that of candidates who won Senate elections and are serving in the 114th Senate, the Democrats received 20 million more votes than the Republicans.

In other words, this is a tally of how many votes the winning Senate candidates got. It’s not a tally of all Senate votes.

Trende prefers the latter metric, and so calculated the Democratic and Republican popular vote shares for the 2010, 2012, and 2014 elections pooled together. He also gets rid of special elections — a good move, which means that each Senator’s race gets included in his numbers only once. He finds that when you perform that analysis, Democrats are ahead by 4.1 million votes, or 2.1 points. So there’s a 54-46 vote Republican majority in spite of Democrats’ advantage on votes. 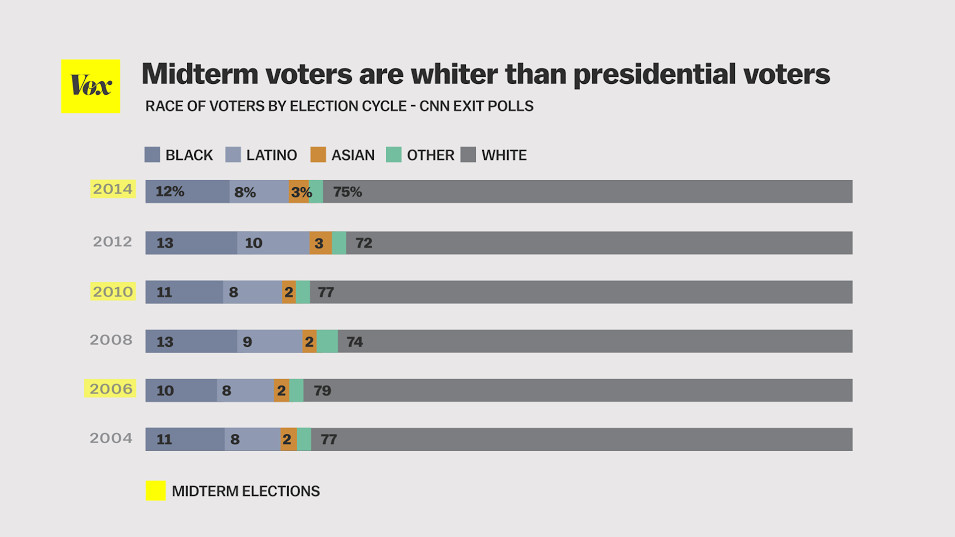 One factor that Trende emphasizes is that turnout was much higher in 2012 than in 2010 and 2014. It always is in presidential elections, relative to midterms. Once you adjust for this, Trende finds that Republicans win the popular vote across the three elections very narrowly — by 0.0042 points. There’s still a discrepancy with their seat total — they got about 50 percent of the popular vote and 54 percent of seats, but it’s noticeably smaller.

But why, exactly, are we adjusting for turnout? Midterm electorate tends to be richer, whiter, older, and better educated than the country as a whole. In presidential elections, turnout is boosted by the added participation of a less affluent, younger, more racially diverse segment of society. Turning out more people in an election isn’t some form of cheating. Rather, the fact that so many elections end up decided by such a small proportion of the country is a problem. That’s part of what the FairVote analysis illuminates.

For the record, these turnout issues are part of why I’m sympathetic to the idea of compulsory voting. Democracy works better the closer we get to universal participation.

The tyranny of distance 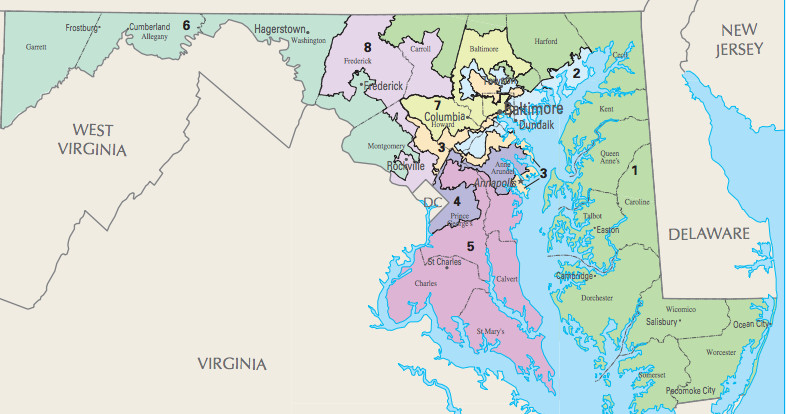 Maryland’s divvying up of Baltimore and the liberal DC suburbs, to create heavily Democratic districts. (National Atlas of the United States)

Let’s go back to the 50 percent figure Trende got to after adjusting for turnout. Since Republicans won 54 percent of the seats, there’s still a gap to explain. He explains this by noting that there’s also a gap between Republicans’ share of the popular vote in House elections and their share of seats, one of similar size to the gap between Senate vote shares and seat shares. States can’t be gerrymandered, he notes, meaning that the gap is “about the nature of the Democratic coalition and how its voters are spread out.”

And how are its voters are spread out? Well, in the words of Vox’s own Andrew Prokop, “Many Democrats live close to each other in urban areas. Because they’re naturally ‘packed’ in, it’s unnatural to draw a map dispersing those voters across many districts. Maps that favor Republicans are just easier to draw — geography has a built-in pro-GOP bias.” This isn’t insurmountable — it’s possible to gerrymander in Democrats’ favor by divvying up liberal urban areas and then matching them with conservative, slightly less populous rural areas. That’s what Maryland and Massachusetts did, for example. But Democratic voters’ concentration in cities is an important fact of political geography.

Small states, almost tautologically, don’t have a lot of heavily populated cities. So when you, as the Senate does, “district by state,” you’re effectively districting in a way that favors rural, conservative-leaning areas and disadvantages liberals living in cities.

Obviously the states’ borders aren’t some GOP gerrymandering conspiracy. Indeed, Democrats in small states — like North Dakota’s Heidi Heitkamp, or Vermont’s Pat Leahy — benefit from this bias as well. But overall, the effect of anti-urban bias is a systemic disadvantage for Democrats, just as it is in the House.

Trende’s third subsection is entitled, “This isn’t the small state bias at work.” This is odd to me, since, as he notes in that very subsection, this is being driven by facts of political geography that make the Senate’s small state bias very relevant.

Should the parties count? 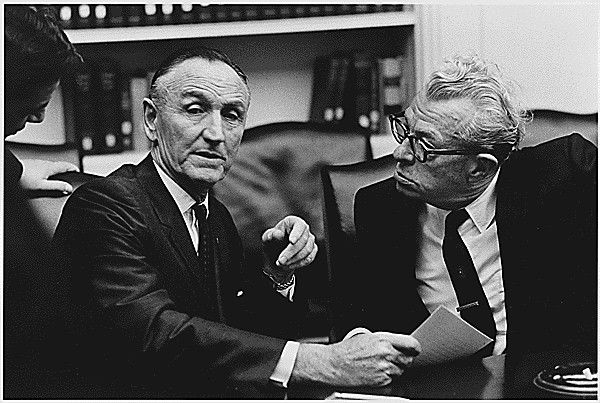 The last issue Trende had with my piece was my willingness to speak about the Democratic Party and the Republican Party as coherent electoral entities. “Democrats didn’t win 50 percent of the votes for the Senate (weighted by overall election turnout); Democratic candidates did,” he writes. “This is an important distinction.”

It is an important distinction. But while voters mark their ballots for candidates, they get parties.

It’s old hat at this point to note that parties in the US weren’t particularly ideological for most of the 20th Century. There were pro-choice, pro-Great Society Republicans and far-right Southern Democrats. That’s changed in recent years such that Congress functions much more like a European parliament. When parties were ideologically diverse, it didn’t matter as much which party controlled the Senate. Likeminded ideologues could simply form bipartisan coalitions.

So from a policy perspective, it really does matter which party controls the Senate and House. Those are the most important variables in determining if legislation gets passed, judges get confirmed, etc. And if you think control of the Senate is important, then the fact that the party vote split in Senate elections doesn’t match up with the resulting seat distribution is very interesting indeed. If you’re a fan of proportional representation, that fact is cause for worry.

It’s true that Senate elections aren’t a perfect proxy for how the country would vote if there were a national election with Democrats and Republicans as the only two choices and seats divvied up based on the parties’ vote shares (as is the case in countries like Sweden, Israel, etc). But it’s as close as we’re going to get.

What does all this say about the Senate?

Once we’ve adjusted for turnout and the geography of the Democratic coalition, Trende concludes that “as long as seats and vote shares are roughly in line,” then discrepancies in individual elections “shouldn’t bother us much.”

But that’s the thing. They’re only roughly in line once you control for the two most important factors in generating the gap between Democrats’ vote share and their seat share. The fact that 67 Senators took office through elections in which many, many fewer people voted than the other 33 makes the Senate less representative than it could, or should, be. So does the Senate’s bias against city-dwellers.

Reasonable people can have differing standards for representativeness, but “Senators in the majority should have gotten more votes than Senators in the minority” strikes me as a plausible conclusion. And FairVote’s analysis shows that the Senate as currently constructed violates that principle. Maybe that means we should reject the principle, as Trende thinks we should. But that’s a matter of political philosophy, not of number-crunching.

More to the point, it would be very strange indeed if there weren’t a gap between Senate vote shares and seat shares. The Senate was purposefully set up as an anti-democratic institution meant to privilege the voices of Connecticut residents above those in, say, New York. That was what small states’ representatives demanded at the Constitutional Convention in 1787, and it’s what they got, over the opposition of those like Alexander Hamilton and James Madison who thought that giving each state the same number of votes was hideously unfair. Moreover, until 1913, the Senate wasn’t even popularly elected.

It would be a rather odd coincidence if this legislature, designed from the ground up to not reflect the popular will, wound up reflecting it accidentally.