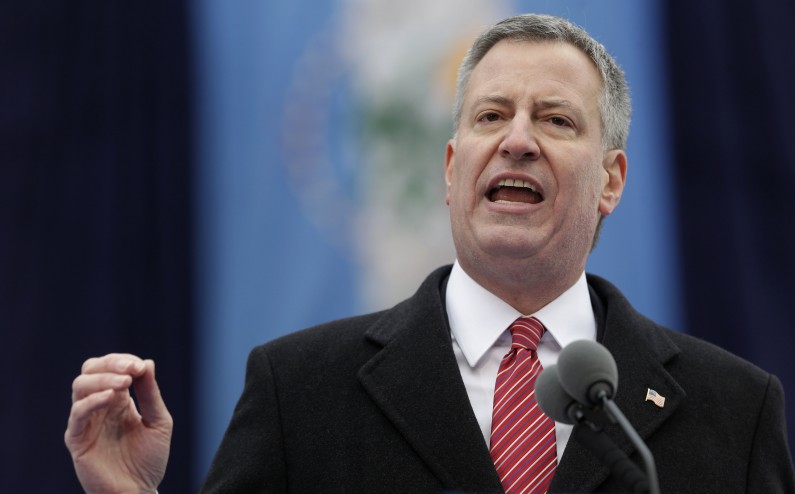 VIA “nypost.com” by Steve Osborne

ON Sunday, at the funeral of the slain New York City police officer Wenjian Liu, his grieving father described how his son would call him at the end of each day’s tour of duty, just to let him know he was O.K.

This sort of habit is familiar to many cops. When I was assigned to the Fugitive Division of the New York City Police Department, in the ’90s, I would get out of bed at 3 o’clock each morning, trying not to wake my wife. I would gently kiss her goodbye and leave for work. By 5 a.m. my team and I would be executing the first of several warrants assigned to us for the day. (Mornings are the best time to catch bad guys.) We were arresting the most wanted and dangerous criminals in the city, and the work was, to put it mildly, stressful. By 9 a.m. we would be back in our office processing our arrests, and I would call my wife without fail, in case she had overslept, and to let her know that I was O.K. and still in one piece.

Years later, during a tearful venting, my wife confided that those calls were seldom needed to wake her because she was usually lying in bed, tossing and turning and fearing that she would get another kind of call. She couldn’t rest until she had word that I was off the streets and safe for another day. I accepted the dangers of police work because I loved doing it and understood its value to society, but I sometimes regret having dragged her into the life with me.

The murders of Officer Liu and his partner, Officer Rafael Ramos, have hit me and my fellow officers especially hard, in ways that may be difficult for civilians, and certain politicians, to fully comprehend. During my 20 years on the job (I retired in 2003), I attended far too many funerals for cops killed in the line of duty. They were all sad and wrenching affairs. But this is different. Getting killed while, say, investigating an armed robbery — as almost happened on Monday to two New York City police officers in the Bronx — is something all cops know can occur, and we accept it. But the killing of Officers Liu and Ramos was a coldblooded assassination.

These brave men were shot without warning, sitting in their patrol car while looking for crime, something every cop on the street does every day. They were like two shepherds guarding their flock, and they were brutally murdered for it.

This act has unleashed a torrent of anger and grief among the members of the Police Department, who take these vile murders personally, and a heartening outpouring of sympathy from ordinary New Yorkers, who instinctively grasp what it has meant at a moment when the police feel demonized, demoralized and, at times, literally under assault. But not everyone is so understanding. The gestures of protest by many officers toward Mayor Bill de Blasio — including turning their backs to him when he appeared at both officers’ funerals — have been characterized in some quarters as squandering the credibility of the department and reeking of self-pity.

When I hear this sort of thing, my blood pressure goes through the roof. Mr. de Blasio is more than any other public figure in this city responsible for feelings of demoralization among the police. It did not help to tell the world about instructing his son, Dante, who is biracial, to be wary of the police, or to publicly signal support of anti-police protesters (for instance, by standing alongside the Rev. Al Sharpton, a staunch backer of the protests). If there is any self-pity involved, which I doubt, it is only because we lack respect from our elected officials and parts of the media. It has taken two dead cops for some people to take a step back and realize what a difficult job cops have.

Most cops I know feel tired of being pushed to do more and more, and then even more. More police productivity has meant far less crime, but at a certain point New York began to feel like, yes, a police state, and the police don’t like it any more than you do. Tremendous successes were achieved in battling crime and making this city a much better place to live and work in and visit. But the time has probably come for the Police Department to ease up on the low-level “broken-windows” stuff while re-evaluating the impact it may or may not have on real, serious crime. No one will welcome this more than the average cop on the beat, who has been pressed to find crime where so much less of it exists.

Unfortunately this will require a mayor with far more finesse and political savvy and credibility with law enforcement than Mr. de Blasio appears to have. His statement on Monday that the New York City Police Department is the greatest in the world came too late. He should have been acknowledging our accomplishments months ago, instead of aligning himself with grandstanding opportunists. His words and actions before the killings of Officers Liu and Ramos showed a contempt for the police all too common on the left, and it is this contempt that the officers who have turned their backs to him are responding to.

But New York City must be governed and its citizens protected, and that means that the Police Department and the mayor will have to find a way to get along. The divide between us is now vast and bitter. For the healing to begin, Mr. de Blasio must find a way to sound like he actually means it when he compliments us and to follow that up with concrete actions that demonstrate respect and true understanding.

Until then he’ll continue to be speaking to a lot of backs in blue.