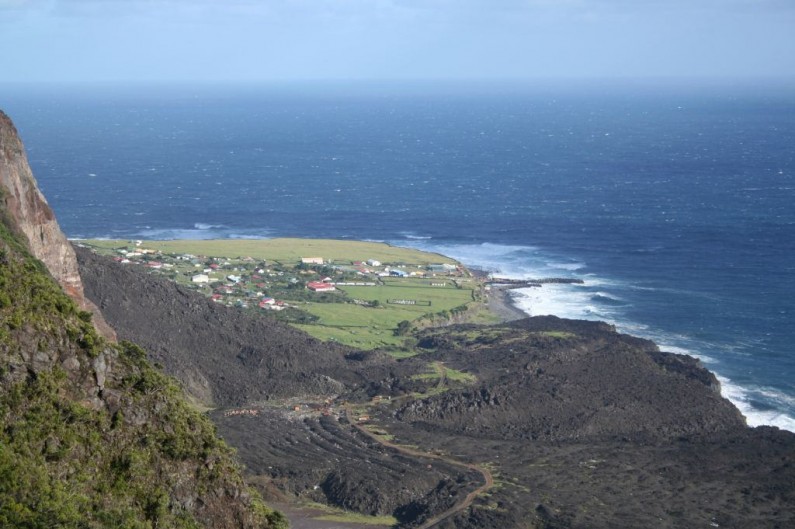 There’s a small island in the middle of the atlantic ocean, completely desolate from everything except for lots of water. The Island, named Tristan da Cunha, was first inhabited back in the 1810′s as an outpost by the British to stop a potential escape by Napolean. When that didn’t happen and the military were called back, a few folk stayed behind to establish life on their beautiful desolate volcanic island.

So on Tristan da Cunha live a small community of about 270 people who love life so much that when their island volcano exploded in the 60′s, their evacuation to Europe only led them to understand that their personal and connected way of life was way more awesome, and came back to rebuild it. (Yeah, pretty much all of them too).

The name of their town? Edinburgh of the Seven Seas. (no joke.)

The Tristan Islanders did indeed return to their own simple life before the very eyes of an amazed, dismayed, and somewhat insulted Western World… It was as if our whole ethos and way of life had been put on trial, and had failed.

See, they make everything there. Absolutely everything! They have no choice. Importing and exporting is a chore, considering their lack of airport and single harbor that is only available to use 60 days out of the year. No, instead they grow their food, create their own clothes, and anything else you could imagine. They do it together, in community, and with a genuine love and respect for each other which has allowed them to sustain life there for over 200 years.

Thanks to a slow trickle of other settlers, Tristan slowly grew into its own tiny community, self-sufficient to the extreme. Without regular contact with the rest of the world, settlers had only themselves and the land to depend on for everything from produce to clothing to materials with which to build boats and homes.

So what’s the problem?

Well, as the modern world is becoming more connected through the internet and other communications technology, the island of Tristan is also in need of some revamping for the 21st Century. Everything from their harbor, to their electricity, to their internet.

And this is where you come in! To coincide with the island’s 200th Anniversary in 2016, the Tristanians are very interested in the ecological transformation of Edinburgh of the Seven Seas, and are looking to the modern world for help. Design Teams from around the globe are invited to participate in a design competition that is looking to demonstrate what a self-sustained ecological town of the future could look like and how it could work.

The competition is seeking innovative, cost-effective approaches for the re-design and consolidation of the Island’s government buildings; initiatives to significantly improve the living standards and performance of residential properties; together with improvements to the Island’s agrarian systems to better support grazing and the year-round growth of fresh produce.

Think you got what it takes?

Thank you to Kelsey Campbell-Dollaghan for her well articulated and longer version article on Gizmodo.