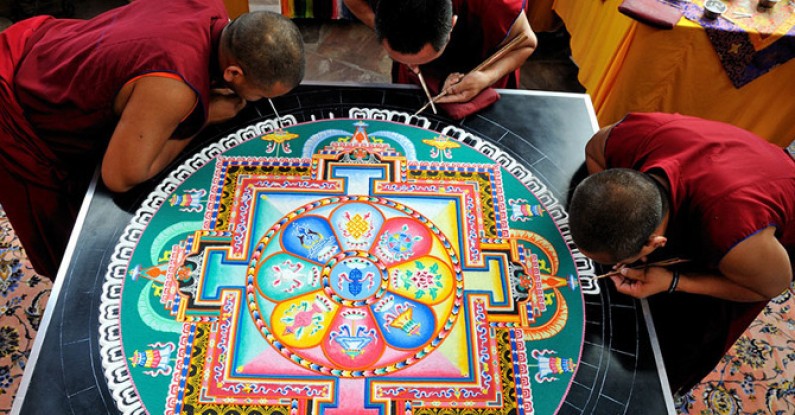 VIA The Spirit Science by Kasim Khan

Tibetan Buddhist monks have created sand mandalas for over 2,500 years, as it remains one of the religion’s most beautiful and symbolic traditions. Each mandala has a center point that is surrounded by a circle, a perfectly symmetrical design of specific meaning, and an accompaniment of various religious deities and symbols. They are created as a representation of the universe and are said to heal the environments as well as the individuals portrayed within them. A single mandala can take days or even weeks to complete.

In 2013, I went to Asheville, North Carolina to visit some friends that I had met on the internet! It was at the very beginning of my Spirit Quest, and I had the priveledge of observing one of these actually being made in real time! My friend Taylor however, was blessed with the priveledge of an even greater sight. He was allowed to film and timelapse the entire experience – from beginning to end! The results were nothing short of amazing:

(ps. Most people wont notice, but Taylor infused the video with the Om Mani Padme Hum mantra 108 times – embedded in 108 frames.)
To begin the creation of a mandala, the monks initiate an opening ceremony of mantra chanting and musical ritual to consecrate the land on which they shall create. Then, one of the artists begins by drawing an outline using a ruler, pen, and compass, drawing from memory alone. Once the outline has been created, the monks work together, delicately pouring sand onto the canvas using their tools to create a vibrant, unimaginably detailed, three-dimensional mandala. Daily prayer and meditation is involved in the process of creation.

When the mandala has been completed, the monks perform a dismantling ritual where the painting is swept away in a particular order and dispersed into the ocean. Many believe this is a symbol of the impermanence of life and a demonstration of non-attachment to material objects. However, there is a greater messaged attached to it.

The idea is that every grain of sand, as it is being created, is filled with the blessings from those who create it, observe it and see it happening. Those grains of sand are then released into a river, which carries it to the ocean, and the ocean spreads the sand to the entire world. It is in this way, that each mandala touches the hearts of billions of people, in a deeply spiritual way.

Here are some pictures of some amazing mandalas that have been made, as well as in-progress, before they were dissipated to everyone on the planet.

The attention to detail that goes into these works of art is truly amazing.

When they are finished the artists simply sweep the work away. But the biggest question of all… Is why?

The greatest gift in the universe, something that allows us to comprehend the beauty of nature, is the impermanence of things. When you observe something majestic, like for example, a sunset… How long does it last? Maybe, half an hour? And then it is swept away into blackness as the dark of night takes over. It’s that impermanence that is demonstrated in this mandala ritual.

In all things, it takes a tremendous deal of energy to create something magical… and only moments to see it gone. This applies to everything, even something like sex. Think about it. You spend all of the time building up, and at the end of it all, the orgasm lasts only moments, and then its done. In all things, what we are left with is our memories, and those memories make us who we are, should we choose to remember the ones of greatest meaning to us.

These works of art bring a whole new meaning to the word original as never again shall a piece be replicated and it will only ever have been seen by so many eyes in it’s original form. There is something rather profound about that.

Please share these stunning works of art and spread the beauty.

Peace to you and yours,
Team Spirit