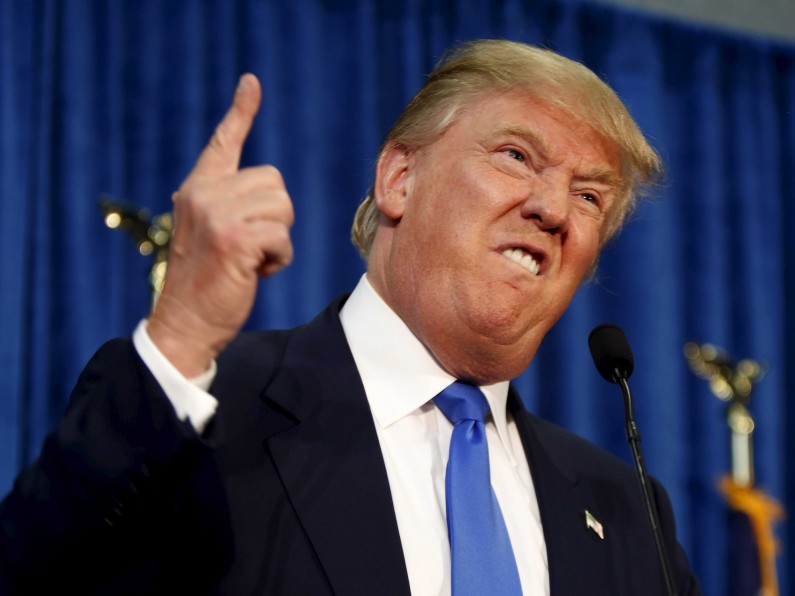 Trump and others are proving it: we can’t handle the truth

VIA Rolling Stone by Matt Taibbi

Donald Trump said this to supporters at an Alabama rally:

It was a hell of a revelation. Where did this witnessing take place? Was he standing on the Hoboken terminal clock tower? George Stephanopoulus challenged Trump on this on ABC’s This Week, noting that police said nothing like that happened.

TRUMP: It did happen. I saw it.

STEPHANOPOULOS: You saw that…

TRUMP: It was on television. I saw it.

Until recently, the narrative of stories like this has been predictable. If a candidate said something nuts, or seemingly not true, an army of humorless journalists quickly dug up all the facts, and the candidate ultimately was either vindicated, apologized, or suffered terrible agonies.

Al Gore for instance never really recovered from saying, “I took the initiative in creating the Internet.” True, he never said he invented the Internet, as is popularly believed, but what he did say was clumsy enough that the line followed him around like an STD for the rest of his (largely unsuccessful) political life.

That dynamic has broken down this election season. Politicians are quickly learning that they can say just about anything and get away with it. Along with vindication, apology and suffering, there now exists a fourth way forward for the politician spewing whoppers: Blame the backlash on media bias and walk away a hero.

This season has seen an explosion of such episodes. Carly Fiorina, in a nationally televised debate, claimed to have watched a nonexistent video of evil feminists harvesting fetal brains. Ben Carson has been through a half-dozen factual dustups, including furious debates over whether or not he stabbed someone and whether or not he once won $10 for being the only honest student in an (apparently nonexistent) Yale psychology class.

Trump, meanwhile, has been through more of these beefs than one can count, even twice blabbing obvious whoppers in live televised debates. Once he claimed the Trans-Pacific Partnership was designed to help China, moving Rand Paul to point out that China isn’t in the TPP. Another time he denied that he once called Marco Rubio “Mark Zuckerberg’s personal senator.” The line was on Trump’s website as he spoke.

In all of these cases, the candidates doubled or tripled down when pestered by reporters and fact-checkers and insisted they’d been victimized by biased media. A great example of how candidates have handled this stuff involved Fiorina.

The former HP chief keeps using a roundly debunked line originally dug up by the Romney campaign, about how 92 percent of the jobs lost under Obama belonged to women. The Romney campaign itself ditched the line because it was wrong even in 2012. When confronted this year, Fiorina simply said, “If the liberal media doesn’t like the data, maybe the liberal media doesn’t like the facts.”

This latest episode with Trump and the 9/11 “celebrations” was fascinating. When Trump started to take heat, he at first did something one journalist I know calls “panic-Googling.” Panic-Googling is saying or writing something dumb, then frantically rushing to the Internet to see if you can luck out into evidence for what you’ve already blabbed in public.

Trump thought he lucked out, digging up a September 18, 2001, Washington Post article by reporters Serge Kovaleski and Frederick Kunkle. The old clip claimed a few people had been detained after allegedly being spotted celebrating in “tailgate-style” parties on rooftops in northern New Jersey.

Seizing upon this factoid, Trump tweeted, “I want an apology! Many people have tweeted that I am right!”

Forgetting that this didn’t come close to being an affirmation that he’d seen “thousands” of people celebrating on television, Trump’s supporters howled in outrage. Who were these biased witch-hunters to accuse him of lying? The Donald was right all along!

Other supporters referenced an article by Debbie Schlussel, Detroit’s schlocky Ann Coulter knockoff, who long ago insisted in print that she once watched an MTV news report describing post-9/11 celebrations by Arabs in Paterson, New Jersey. It wasn’t Jersey City, Schlussel said, and Trump got the numbers wrong, but aside from those minor issues, he was dead right.

Next in the progression came Rush Limbaugh, who came to Trump’s defense by saying that “regardless of the specific details,” Trump was right about Muslims on American soil celebrating the collapse of the towers on 9/11. “The bottom line is that a lot of Americans are well aware that Muslims were cheering,” Rush said. “Maybe not in New Jersey in great numbers, but around the world they were because we saw the video.”

As if the “regardless of the specific details” excuse wasn’t weird enough, Trump spokesman Corey Lewandowski next went on Breitbart radio to explain that the campaign had in fact provided material about celebrating Muslims to mainstream news outlets, who were now collectively declining to run it because of an ongoing conspiracy against Trump.

“They want to try and discredit as many people as possible so they can have an establishment candidate come in,” he said. “Because they are all controlled by special interests and all controlled by the media.”

This is a horrible thing to have to say about one’s own country, but this story makes it official. America is now too dumb for TV news.

It’s our fault. We in the media have spent decades turning the news into a consumer business that’s basically indistinguishable from selling cheeseburgers or video games. You want bigger margins, you just cram the product full of more fat and sugar and violence and wait for your obese, over-stimulated customer to come waddling forth.

The old Edward R. Murrow, eat-your-broccoli version of the news was banished long ago. Once such whiny purists were driven from editorial posts and the ad people over the last four or five decades got invited in, things changed. Then it was nothing but murders, bombs, and panda births, delivered to thickening couch potatoes in ever briefer blasts of forty, thirty, twenty seconds.

What we call right-wing and liberal media in this country are really just two different strategies of the same kind of nihilistic lizard-brain sensationalism. The ideal CNN story is a baby down a well, while the ideal Fox story is probably a baby thrown down a well by a Muslim terrorist or an ACORN activist. Both companies offer the same service, it’s just that the Fox version is a little kinkier.

When you make the news into this kind of consumer business, pretty soon audiences lose the ability to distinguish between what they think they’re doing, informing themselves, and what they’re actually doing, shopping.

And who shops for products he or she doesn’t want? That’s why the consumer news business was always destined to hit this kind of impasse. You can get by for a long time by carefully selecting the facts you know your audiences will like, and calling that news. But eventually there will be a truth that displeases your customers. What do you do then?

In this case, as Rush said, “Americans are well aware Muslims were cheering” after 9/11. Because America “knows” this, it now expects the news media to deliver that story. And if reporters refuse, it can only be out of bias.

What this 9/11 celebrations story shows is that American news audiences have had their fantasies stroked for so long that they can’t even remember stuff that happened not that long ago. It’s like an organic version of 1984, with audiences constantly editing even their own memories to fit their current attitudes about things.

It was preposterous from the start to think that there could have been contemporaneous broadcasts of “thousands” of people in New Jersey celebrating the 9/11 attacks. Does nobody remember how people felt that day? If there had been such broadcasts, there would have been massacres – angry Americans would have stormed Jersey City.

In fact, police had to be deployed to places like Paterson anyway to protect immigrants from exactly that sort of mob violence. This is one of the reasons we know Muslims weren’t dancing en masse in the streets, because police were parked on those streets in huge numbers to keep people out.

The Newark Star-Ledger did a report in the weeks after the attacks from Paterson showing the city in “virtual lockdown,” with police camped in Muslim neighborhoods for the protection of the locals.

“In this neighborhood, in South Paterson, we don’t feel threatened,” Samir Asmar, a Palestinian who became a U.S. citizen, told the paper. “But once we go outside, I fear for my wife and son.”

Beyond all of that: if footage of such a celebration existed, it would have skyrocketed around the country, and not popped off ineffectually on some local broadcast for just Donald Trump to see and remember. The whole thing is nuts.

There are people of all political persuasions who insist to this day they saw something like what Trump described, but nobody describes anything like the scale of the story Trump is spinning. To believe there was a mass demonstration of open, gloating defiance right across the river from Manhattan while the Towers smoldered, speaks to a powerfully crazy fantasy both about American impotence and about a brazen, homogenous evil in Muslim-American communities.

Maybe in the wake of Paris that’s the way people feel, but it’s not close to what happened. If we can’t even remember things correctly even in the video age, things are going to get weird pretty fast in this country.