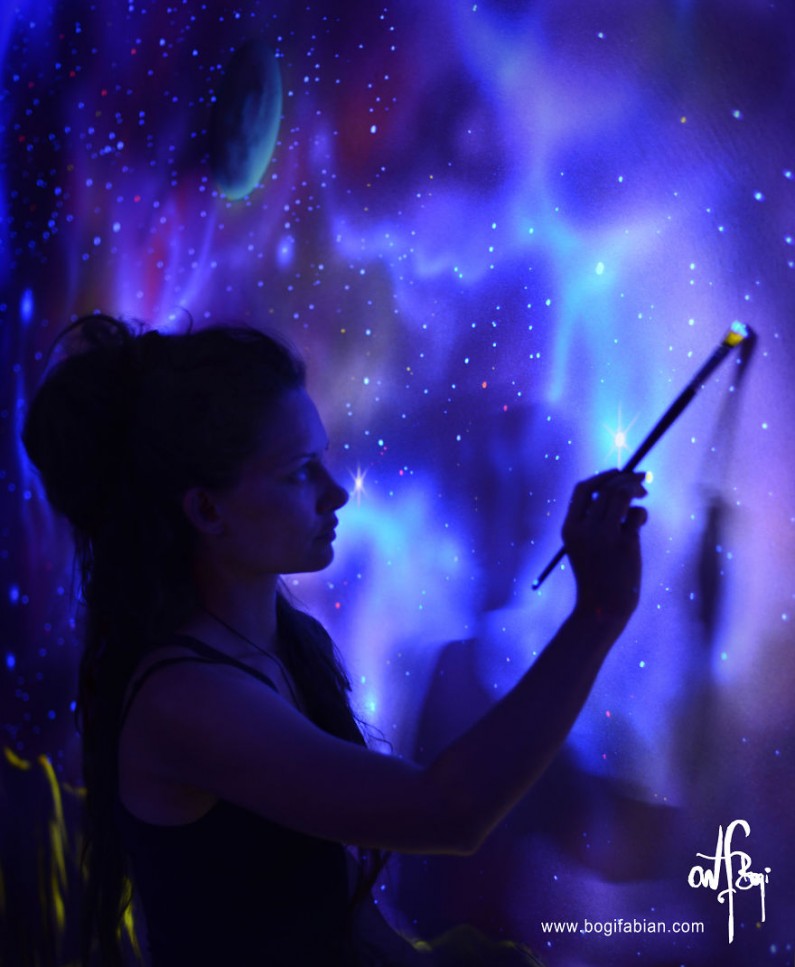 Bogi Fabian’s inspirational twist on interior art is not just ‘glow-in-the-dark’; it’s more like food for the soul.

European artist, Bogi Fabian is an incredibly talented artist capable of turning dark rooms into dazzling, dreamy worlds. In her murals project, Bogi focuses on creating a dream-like atmosphere by painting floors and walls so that they take on a different life form depending on if it’s dark or light in the room.

The final results are fueled by both energy and non-energy sources, granting the spectator a chance to fully appreciate the artwork in both daylight and the dark. Bogi writes on her official website, “My goal is to create unique spaces and rooms giving them an identity and a soul, where relaxing and living become an experience.”

Born in Hungary in 1984, Bogi Fabian became interested in the arts from a very early age. Bogi is described as a sensitive soul that allows her emotions to guide her artwork to deeper depths.

As a teenager Bogi craved new knowledge regarding social relations and natural phenomena, and the older she gets the more her curiosity grows. All of these deep inner thoughts and feelings come out in her artwork, creating a passionate appeal that sparks curiosity and inspiration in all who view it.

Some of these murals appear to be nothing more than white-washed walls, but turn off the lights and a stunning display full of intricate detailing and other worldly illustrations come to life. Other murals are clearly present in the light, but become beautiful in an entirely new way as soon as the lights go out.

Bogi nails her goal of creating dreamy spaces, who wouldn’t fall right into a dream-like state hanging out in these awesome rooms?!

Bogi uses 3D elements to make her glowing murals practically come off of the wall. It takes hard work to create these wondrous designs, some of which Bogi completes in the light, and some she completes in the dark.

Under the sea, or under the stars, Bogi can transport your bedroom to just about anywhere, all you have to do is turn off the lights.

In her early twenties Bogi decided to head off to Italy in order to further her creativity and artistic skills. During this time she picked up a unique method of wall painting and interior design.

Her complicated techniques incorporate an endless bounty of colors and pigments in order to create final results that are unique and exceptional no matter if it is light or dark.

I wish I could fall asleep under a blanket of stars like the lucky slumberer that calls this room home!

In more recent years, Bogi has since applied her unique techniques to body painting, a skill that has earned her vast attention and recognition.

Today, Bogi lives in Vienna where she continues to pursue her passion for the arts. Besides these amazing glowing murals, Bogi currently busies herself with ceramic design, including jewelry that lights up in the dark. She is also concerned with creating art that digs deeper at issues related to transcendence, questions regarding consciousness and existence.

“Allow the universe to become a part of your daily life…”

“Be mindful of your self-talk. It’s a conversation with the universe…”

Bogi’s work is unique and inspirational, hence how she has generated such a media buzz around her artwork. Join over 21,000 people and like Bogi’s highly regarded artwork on Facebook!