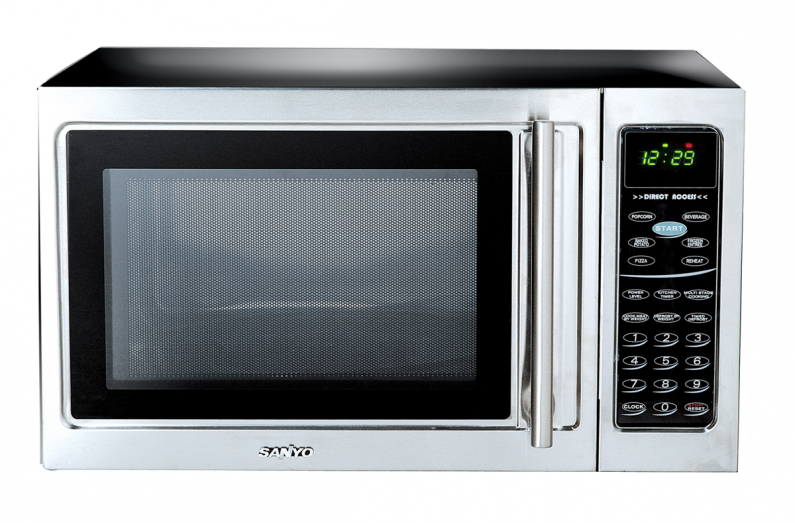 VIA “collective-evolution.com” by Mark DeNicola

They’re fast, convenient, and easy to use. Manufacturers even produce packaged foods specifically for their use. What I’m referring to are of course, microwave ovens, the household appliance that is still regularly used as a part of meal preparation and re-heating in approximately 90% of American homes.

I say “still” in the previous statement because the dangers associated with microwave use have been documented for quite some time, dangers that I will once again outline in this article. Ultimately, arguments can always be made for the use of anything harmful if done in moderation, but given the hectic nature of most of our lives, the convenience the device offers makes little to moderate use seem very unlikely to be practiced.

Microwaves heat food by causing the water molecules contained within to vibrate at very high frequencies, eventually turning those molecules into steam. It is this reaction which increases the temperature of your food. The type of heating microwaves produce is known as dielectric heating, which bounces around the device and is absorbed by the food that you put into it.

Heating your food in general is known to deprive it of at least a portion of its nutrients, but many believe that opting to heat food via a microwave also subjects it to what is referred to as the “microwave effect.” Many still argue that the microwave effect is a myth, but a number of studies have come out suggesting otherwise. Most notably, a study released by Penn State University in 2001 stated that conventional and microwave heating appear the same at the macro level but are very different at the molecular level. The study also referenced a 1995 study in which a scientist successfully demonstrated that microwaves – unlike other heating devices – are capable of destroying viral DNA.(1)

Another study conducted in 2003 examined broccoli prepared in the microwave and found that the vegetable had lost 97% of its valuable antioxidant content through the cooking process.(4) Given that we live in a world dominated by processed food, and much of the fresh produce we do eat is grown in soil heavily depleted of its naturally occurring nutrients, the idea of losing even more nutrition seems almost like a knockout punch to our health. To most of us, myself included, eating completely raw is definitely not overly enticing, so opting for the best possible cooking method certainly does seem important.

The best possible cooking method also extends into the oil you choose to prepare your food with, since many oils are found to turn rancid when heated past a certain point. You can find out more about that HERE and see one better alternative HERE.

We’re all familiar with the “Microwave Safe” label found on a number of food containers, but this label is entirely misleading. Despite what many people think, it only refers to the container’s ability to be used in a microwave safely without melting or starting a fire. What it doesn’t refer to is the container’s safety in terms of the numerous toxic chemicals it can leak into your food when heated – chemicals which you then ingest.

Chemicals such as polyethylene terpthalate (PET), benzene, toluene, xylene, the now well-known BPA, and even it’s so-called safer alternative BPS. Many of these chemicals have been linked to the impairment of female reproductive elements and brain development, along with diabetes, prostate disease, and more. The microwaving of fatty foods in “microwave safe” plastic containers has also been found to lead to the release of the known carcinogen dioxins.(1)

Oven-safe glass is widely recognized as one of the best alternatives when it comes to heating your food, and even though glassware can often be more expensive than many of its counterparts, it seems to be a worthy investment.

Even A New & Safety Inspected Microwave Can Leak Radiation

Microwave manufacturers do deserve a lot of credit for the heightened safety standards they’ve put into practice when developing the newest microwave ovens. Thanks to their hard work, a number of previous concerns have been rectified, however there still seems to be some exposure, especially when within a certain radius of the appliance when in use.

Even a brand new, perfectly functioning and locking microwave can expose us to up to 400 milliGauss of unwanted radiation. To put that into perspective, a mere 4 milliGauss has been linked to leukemia.(1) Steering clear of microwaves when in use is certainly advisable for all but is particularly critical for both pregnant women and children. Given that microwaves are most often used in the midst of the cooking process, steering clear of them can often be quite difficult, further exemplifying why they should be avoided altogether if possible.

How To Move On Without A Microwave

There are certainly no shortage of alternatives when it comes to heating food. The one key difference between microwaves and the other available options, however, is time. As with so many other worthy changes we feel inspired to make in our lives, they take a level of commitment in order to be implemented properly.

A simple step such as planning ahead can go a long way towards avoiding the need for a microwave. Taking frozen ingredients out of the freezer well in advance of meal preparation time will give them the opportunity to naturally thaw out in time for when they need to be cooked.

I believe that the more we become consciously present with the meals we prepare, the more likely we are to naturally steer away from the need for a quick prep option. Both a toaster oven and conventional oven may take substantially longer to prepare a meal, but the health concerns that they successfully avoid is certainly worth the wait.

I personally haven’t had a microwave in any of the houses I’ve lived in since the age of 12 and I can’t say that I miss it. What are your thoughts on the health concerns related to microwaves? Do you still use one regularly? And if so, why? We’d love to know via the comment section below.

For an even more in-depth analysis on the concerns related to microwave ovens, I strongly suggest you check out the Mercola article referenced throughout the article and as (1) below.