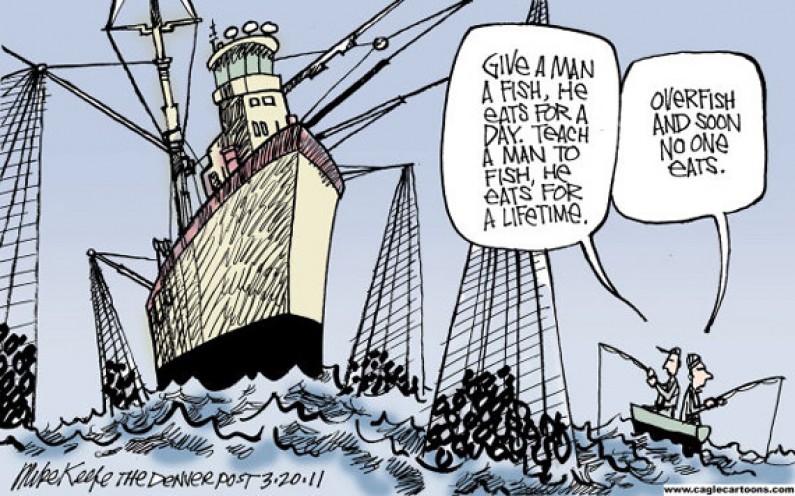 VIA UPWORTHY by Lori White

What’s in a name?

For fish, the stakes of a name are quite high. With a new name, a fish that was once never even considered edible by society becomes THE fish to eat.

Sure it’s delicious … but what’s its NAME? Image via Evan Blaser/Flickr.

Renamed fish can get more expensive and wind up becoming endangered faster.

Even lobster has been a victim of rebranding.

Lobster used to be considered a food for, well, people down on their luck — prisoners, servants, and the like — because they were so plentiful. But around the 19th century, American tourists started traveling to lobster country in New England in search of authenticity, a rustic living experience, and local dishes, and the crustaceans started to be seen as more of a delicacy.

Fast forward to lobster being overfished so much that its prices actually skyrocketed.

Rebranding helps to sell fish, but it winds up shifting things really far out of balance.

Turns out this rebranding and renaming is nothing new. Many fish have been renamed out of their hilariously gross names and gross reputations, leading to high demand, high cost, and high negative human impact.

This magical button delivers Upworthy stories to you on Facebook:

When deep sea fishing companies see piles and piles of money in their future, many of the fishing boats that get into the game are funded illegally — and because the high seas has a problem with law enforcement, illegal fishing is not only profitable, it’s feasible.

And because these fishing boats are working largely outside the law, there’s a much higher occurrence of human rights and labor abuses on illegal fishing boats. Unsustainably fished seafood, especially in the case of deep sea fishing, has a real human impact.

So in the interest of wisdom, here’s a short list of rebranded fish that marketers are schooling you on:

Chilean sea bass are a perfect example of this rebranding problem.

They were once known as the toothfish: ugly, oily, bottom dwelling, frozen in the Antarctic water, toothy fish.

But great with a miso marinade, apparently! Image via Foobaz/Wikimedia Commons.

At the beginning of their meteoric rise to unsustainable populations, Chilean sea bass were $8 per pound. Now? Good luck finding them for under $25.

Even though Chilean sea bass are no longer considered “endangered” or “threatened,” they’re still “at risk for overfishing.”

That ball of green spines used to be called that interestingly colorful name above by Maine lobstermen. Renamed “Maine sea urchins,” it found new life in sushi restaurants under the Japanese name “uni”!

According to the New York Times, “an ambitious diver [for Maine sea urchins] can earn as much as $2,500 a week harvesting sea urchins, depending on the diver and the catch.”

These guys are also known as rock crabs or sand crabs. Tasty! Image via Pseudopanax/Wikimedia Commons.

As a New York Times report mentions, the peekytoe crab is seeing a price jump since it went from trash to treasure with a rebrand.

” This little crab is so beloved at Restaurant Daniel, Jean Georges, the French Laundry, Spago and other famous eating establishments that the chefs pay $12 to $14 a pound for something that has long been routinely discarded.”

According to a report from the Washington Post, harvests of this fish increased five-fold (five!) from the mid-1980s to the late-1990s after rebranding.

And the roughy still has it pretty rough. It’s still so at risk that some grocers, such as Whole Foods, Trader Joe’s, and Safeway, placed a ban on selling it.

With just a little more awareness and technology (like apps that let you search to make sure the fish you’re eating isn’t created by human suffering and contributing to a sad ocean), we can drive down the literal price of the fish and, particularly in the case of deep sea fish like the Patagonian Toothfish, we can drive down the HUMAN cost (aka human trafficking and labor problems).

It starts with awareness. It ends with a happier ocean, happier people, and a stronger world for generations to come.