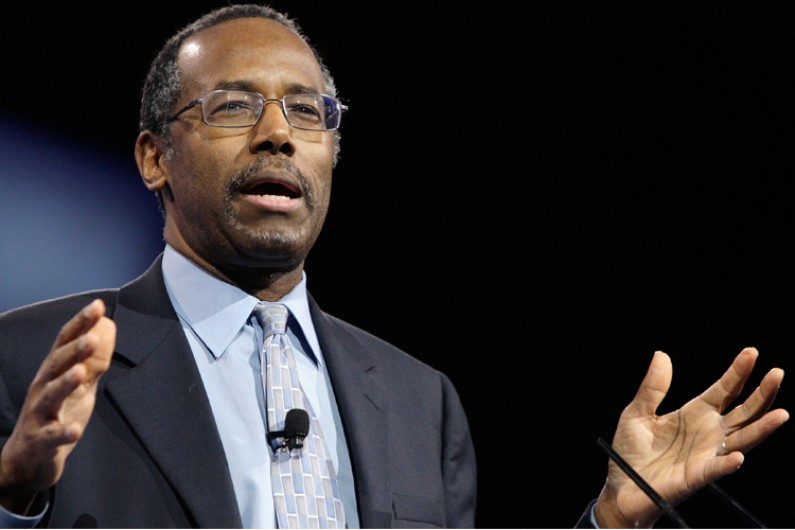 VIA The Atlantic by Peter Beinart

The presidential candidate’s remarks on homosexuality are more likely to help than hurt his political aspirations.

You might think Ben Carson’s recent comments suggesting that prison turns people gay have hurt his presidential campaign. I don’t buy it. In fact, I suspect they’ll improve his chances.

First, Carson’s supporters agree with what he said. According to a March 2014 Washington Post poll, 48 percent of conservative Republicans think being gay is something you choose while only 39 percent disagree. If you polled the activists on the Christian-right most likely to back Carson’s campaign, that figure would probably be even more lopsided.

Second, it won’t exactly shock Carson’s backers to hear that he’s anti-gay. Last March, Carson made headlines for linking “gays” to members of NAMBLA, the man/boy love society, and to “people who believe in bestiality.” Liberals pounced. But there’s no evidence Carson’s comments hurt his nascent presidential campaign. In fact, polls in key primary states regularly show Carson running ahead of candidates like Ted Cruz, Marco Rubio, and Rick Perry, who the press takes more seriously.

Carson’s anti-gay reputation may hurt him among Republican elites, which could help explain why, after his prison comment, he has now backtracked. But among the hard-right activists he’s courting, Carson’s ability to offend is key to his appeal.

Being politically incorrect is a big part of Carson’s brand. In his 2009 book, The Big Picture, Carson argues that the “obsession with politically correct speech” has “reduced the quality of meaningful dialogue” and “discourages honesty.” And he claims that the two issues on which “political correctness” takes the greatest toll are abortion and gay rights. In the 2013 National Prayer Breakfast speech that helped catapult him to political fame, Carson said, “PC is dangerous, because you see, this country, one of the founding principles was freedom of thought and freedom of expression. And it muffles people.” Last month, Carson declared that “there’s no such thing as a politically correct war.”

Statements like this make right-wingers stand up and cheer. Last December, after Carson spoke to 900 adoring fans at a forum sponsored by the Christian right group Family Leader, the group’s president, Bob Vander Plaats, told CNN, “It is like a breath of fresh air when he talks about not being politically correct and how he won’t be controlled by the ‘PC police’ and he will say what needs to be said. That message really resonated.”

It particularly resonates, I suspect, because Carson is black. There’s no subject on which conservatives feel as harassed by the “PC police” as on race. Thus, to hear an African American denounce political correctness offers a special thrill. And for conservatives, the fact that Carson, despite being African American, is regularly stopped and frisked by the “PC police” himself, proves that maybe liberals are the real racists after all. After Carson’s comments comparing homosexuality to bestiality, Sean Hannity declared that, “The left just has daggers out for him. You can’t be African American and conservative without breaking some liberal rule.”

To stay in the public conversation, Ben Carson must keep committing gaffes like the one he committed this week. After all, he’s never held elective office and has little command of policy. He’s not offering a governing agenda; he’s fighting the culture war. And the more fiercely he fights it, the more excited conservatives are to have him on their side.