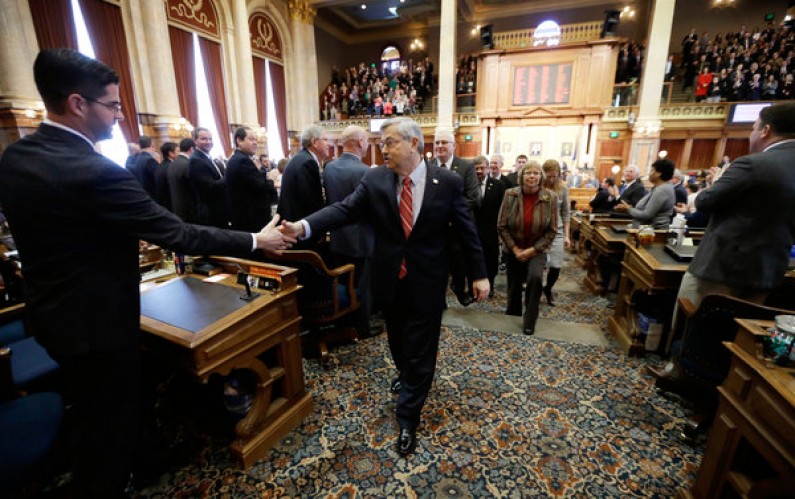 VIA “nytimes.com” by Trip Gabriel

DES MOINES — In the early jockeying among presidential candidates, Iowa’s Republican leaders see signs that their state, which once seemed on the brink of political irrelevance, is back in the game.

Jeb Bush has hired the state’s top Republican strategist as a likely national campaign manager, and Mr. Bush is planning his first visit to Iowa since 2012 next month, suggesting he intends to compete for voters here.

Gov. Chris Christie of New Jersey, another potential candidate from the party’s establishment, showed up for a daylong forum of conservatives in Des Moines recently. He made a pitch about his electability, an argument that Iowa’s passionate base has not always cared to consider.

No one is more pleased than Gov. Terry E. Branstad, for whom preserving the caucuses as the nation’s first nominating contest has been a personal quest.

In 2012, after two presidential cycles in which deeply conservative activists dominated the caucus voting and national Republicans discounted the winner, the state’s Republican Party leadership shifted further, into the hands of libertarians. The Republican Party of Iowa, critics said, had become Ron Paul Inc., so dominated by fans of the Texas congressman that it was effectively closed off to other candidates.

So Mr. Branstad engineered a purge, recruiting Republican activists to replace the libertarians and Christian conservatives who had taken over the party

“Nobody else would have played here if the Ron Paul faction controlled the party,” said Jeff Boeyink, a former chief of staff to the governor. “Other candidates would have felt the caucus wasn’t a level playing field and they would have skipped Iowa.”

The value of the caucuses is incalculable to Iowa, shining a year of national attention on the state. Spending by candidates and the news media is relatively modest: $17 million in the run-up to 2012, according to the Greater Des Moines Convention and Visitors Bureau. But another benefit is significant: Almost all candidates feel the need to bow down to the state’s multibillion ethanol industry, endorsing federal subsidies for biofuels.

The governor’s movement to retake the party was a yearlong project, and it reshaped the landscape. Now Iowa is a more open environment than it has been for years, Republican strategists said, especially for establishment candidates like Mr. Bush and Mr. Christie.

Aides who helped lead Mr. Branstad’s purge last year are being recruited by likely presidential campaigns in the state. Foot soldiers in the effort are positioned as a new generation of grass-roots activists.

“A lot of people who got actively involved in the party in order to accomplish the purge are the kind of people a guy like Jeb Bush very much needs,” said Doug Gross, a Republican strategist in Iowa.

That is not to say that Mr. Bush, the former governor of Florida, or Mr. Christie has the strongest shot of winning in Iowa, where social conservatives and small-government libertarians are stronger than in many states.

A poll of likely Republican caucus-goers conducted last week showed Gov. Scott Walker of Wisconsin with 15 percent support followed closely by two close rivals: Senator Rand Paul of Kentucky and Mike Huckabee, a former Arkansas governor and Fox News host. The retired surgeon Ben Carson, Mr. Bush and Senator Ted Cruz of Texas were not far behind. All of these candidates were clustered within the margin of sampling error in the poll, by The Des Moines Register and Bloomberg Politics.

Although Mr. Bush skipped a recent forum in Iowa dominated by conservatives — where Mr. Walker delivered a breakout performance on the stump — the former Florida governor called the chairman of the state party a few days earlier to suggest he would not bypass the state if he seeks the nomination. He is expected to participate in the Iowa Agriculture Summit with other potential candidates March 7 in Des Moines.

“A lot of these candidates have vaguely heard we’ve had this change,” said Jeff Kaufmann, the state party chairman, who has been in the job seven months. “Some are wanting to meet me over the phone and make sure this is indeed a new party that’s going to be welcoming and fair.”

Mr. Kaufmann was the establishment’s answer to an earlier chairman, A.J. Spiker, a leader of the state’s Ron Paul supporters in 2012, who transferred their allegiance to his son, Rand Paul.

Under Mr. Spiker, the state party pushed to legalize raw milk sales and to audit the Federal Reserve, and it advised motorists stopped by the state police “not to give in to any illegal searches of your car.” Fund-raising was neglected.

Traditional Republicans were infuriated. Mr. Branstad’s decision to seek a historic sixth term in 2014 was driven in part by his desire to take back the party.

At conventions in the state’s four congressional districts in April, the governor’s operatives were out in force. “We had an internal whip team, upwards of 50 of us all communicating — much of the Iowa political class,” said Matt Strawn, a former state party chairman.

Their victory was crushing: All 16 members of the party central committee endorsed by the Branstad camp won. The Paul faction was turned out, along with their Christian evangelical allies.

Mr. Spiker, now an adviser to Rand Paul, denied his party leadership had threatened to diminish the 2016 caucuses, noting that his predecessor, Mr. Strawn, stepped down after a debacle at the 2012 caucuses, when Mitt Romney was first named the winner, only to have Rick Santorum certified the victor two weeks later. “We had an establishment chair last time, and he had to be corrected by us,” Mr. Spiker said.

Supporters of Mr. Branstad said that in taking back the party, they had no desire to thwart Rand Paul’s chances in Iowa. But they feared that without a level playing field, the Republican National Committee would strip Iowa of the right to hold the first nominating contest of the election.

Mr. Kaufmann said that at his first national committee meeting in August, Republican officials were relieved. “I can’t tell you the amount of conversations in which people said, ‘Oh, thank goodness,’ ” he said.