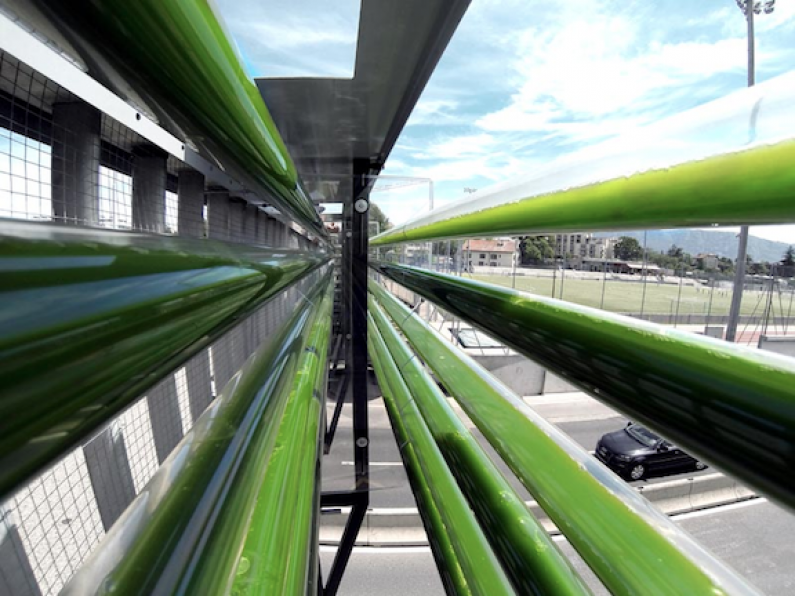 VIA “planetexperts.com” by Planet Editor

What if your daily commute was a central ingredient in creating cleaner air and renewable energy? For some Swiss drivers, that ‘what if’ is now a green, soupy reality.For the city of Geneva’s 2014 garden festival, Villes et Champs, The Cloud Collective built a system of transparent tubes on a highway overpass that uses a growing colony of algae to absorb the emissions from passing cars and the solar radiation of the sun. This project is one of 13 “gardens” that “focuses on the co-habitation of the urban and the natural within the context of the urban expansion of Geneva.”

The system is built upon a steel structure that supports the pumps, filters and solar panels that make the bioreactor possible. The Cloud Collective, a group of architects, creatives and designers, also built an information center for pedestrians that explains how the algae farm reinterprets the existing infrastructure in the use of future food production and “the conservation of green space.”While attached to the overpass, the algae farm eats up carbon dioxide and produces oxygen. Once the algae matures, it can be used to create a range of products, from cosmetics to medicines to nutrients and even combustible biomass. As Gizmodo points out, this installation is really just a proof of concept to showcase how easily such a farm can be integrated into the urban environment. Further installations could be built on a much larger scale.

The placement of an algae farm over an overpass is doubly intriguing, not only for its ability to filter highway exhaust but also for potentially turning that exhaust into fuel for new cars. In late 2013, engineers at the Department of Energy’s Pacific Northwest National Laboratory discovered a way to turn algae into crude oil. The process takes less than an hour and Genifuel, a renewable energy company, is currently working on a way to commercialize it.