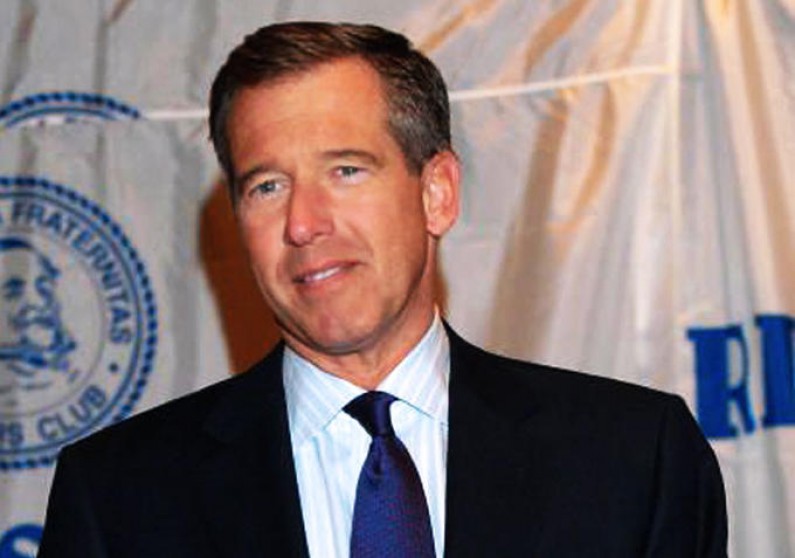 VIA “stripes.com” by Travis J. Tritten

WASHINGTON — NBC Nightly News anchor Brian Williams admitted Wednesday he was not aboard a helicopter hit and forced down by RPG fire during the invasion of Iraq in 2003, a false claim that has been repeated by the network for years.

Williams repeated the claim Friday during NBC’s coverage of a public tribute at a New York Rangers hockey game for a retired soldier that had provided ground security for the grounded helicopters, a game to which Williams accompanied him. In an interview with Stars and Stripes, he said he had misremembered the events and was sorry.

The admission came after crew members on the 159th Aviation Regiment’s Chinook that was hit by two rockets and small arms fire told Stars and Stripes that the NBC anchor was nowhere near that aircraft or two other Chinooks flying in the formation that took fire. Williams arrived in the area about an hour later on another helicopter after the other three had made an emergency landing, the crew members said.

“I would not have chosen to make this mistake,” Williams said. “I don’t know what screwed up in my mind that caused me to conflate one aircraft with another.”

Williams told his Nightly News audience that the erroneous claim was part of a “bungled attempt” to thank soldiers who helped protect him in Iraq in 2003. “I made a mistake in recalling the events of 12 years ago,” Williams said. “I want to apologize.”

Williams made the claim about the incident while presenting NBC coverage of the tribute to the retired command sergeant major at the Rangers game Friday. Fans gave the soldier a standing ovation.

“The story actually started with a terrible moment a dozen years back during the invasion of Iraq when the helicopter we were traveling in was forced down after being hit by an RPG,” Williams said on the broadcast. “Our traveling NBC News team was rescued, surrounded and kept alive by an armor mechanized platoon from the U.S. Army 3rd Infantry.”

Williams and his camera crew were actually aboard a Chinook in a formation that was about an hour behind the three helicopters that came under fire, according to crew member interviews.

That Chinook took no fire and landed later beside the damaged helicopter due to an impending sandstorm from the Iraqi desert, according to Sgt. 1st Class Joseph Miller, who was the flight engineer on the aircraft that carried the journalists.

“No, we never came under direct enemy fire to the aircraft,” he said Wednesday.

The helicopters, along with the NBC crew, remained on the ground at a forward operating base west of Baghdad for two or three days, where they were surrounded by an Army unit with Bradley fighting vehicles and Abrams M-1 tanks.

Miller said he never saw any direct fire on the position from Iraqi forces.

The claim rankled Miller as well as soldiers aboard the formation of 159th Aviation Regiment Chinooks that were flying far ahead and did come under attack during the March 24, 2003, mission.

One of the helicopters was hit by two rocket-propelled grenades — one did not detonate but passed through the airframe and rotor blades — as well as small arms fire.

“It was something personal for us that was kind of life-changing for me. I know how lucky I was to survive it,” said Lance Reynolds, who was the flight engineer. “It felt like a personal experience that someone else wanted to participate in and didn’t deserve to participate in.”

Reynolds said Williams and the NBC cameramen arrived in a helicopter 30 to 60 minutes after his damaged Chinook made a rolling landing at an Iraqi airfield and skidded off the runway into the desert.

He said Williams approached and took photos of the damage, but Reynolds brushed them off because the crew was assessing damage and he was worried that his wife, who was alone in Germany, might see the news report.

“I wanted to tell her myself everything was all right before she got news of this happening,” Reynolds said.

The NBC crew stayed only for about 10 minutes and then went to see the Army armored units that had been guarding the nearby Forward Operating Base Rams and came out to provide a security perimeter around the aircraft. Tim Terpak, the command sergeant major who accompanied Williams to the Rangers game, was among those soldiers, and the two struck up a friendship.

Miller, Reynolds and Mike O’Keeffe, who was a door gunner on the damaged Chinook, said they all recall NBC reporting that Williams was aboard the aircraft that was attacked, despite it being false. The NBC online archive shows the network broadcast a news story on March 26, 2003, with the headline, “Target Iraq: Helicopter NBC’s Brian Williams Was Riding In Comes Under Fire.”

Williams disputed Wednesday claims the initial reports were inaccurate, saying he originally reported he was in another helicopter but later confused the events. In a 2008 NBC blog post with his byline, he wrote that the “Chinook helicopter flying in front of ours (from the 101st Airborne) took an RPG to the rear rotor.”

O’Keeffe said the incident has bothered him since he and others first saw the original report after returning to Kuwait.

“Over the years it faded,” he said, “and then to see it last week it was — I can’t believe he is still telling this false narrative.”