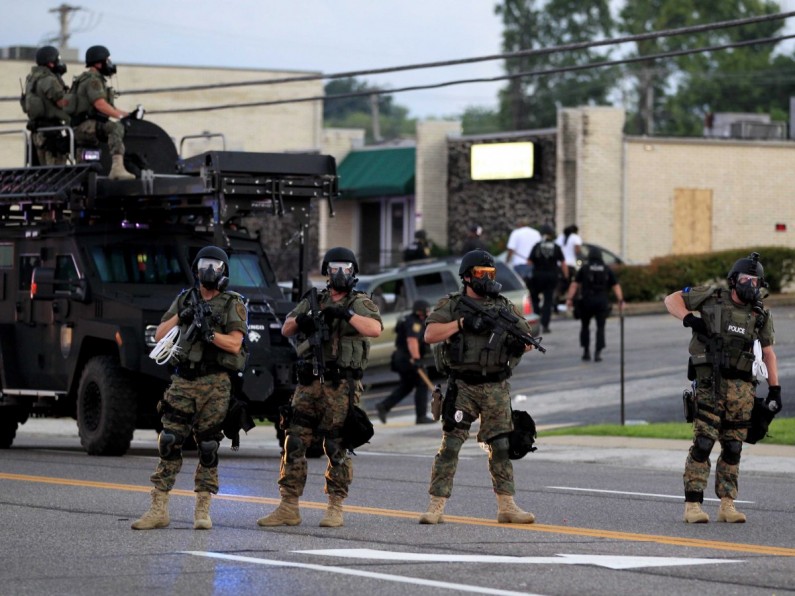 VIA “thefederalist.com” by Rachel Lu

We need some more information before we can really say the Ferguson, Missouri police department is racist.

It’s official. The Ferguson Police Department is racist. That, at any rate, was the quick takeaway from a report released yesterday on the U.S. Justice Department’s investigation of law enforcement in Ferguson, Missouri.

Ferguson became infamous last year when Officer Darren Wilson’s fatal shooting of 18-year-old Michael Brown sparked protests, riots, and a torrent of national scrutiny. Interestingly, the investigation effectively vindicated Wilson. But it also concluded that the FPD has demonstrated a pattern of abuses that have built resentment and racial tension, particularly among Ferguson’s African-American community.

It sounds bad. Here are some questions we should ask in light of the report:

1. Is there any chance government might actually stop using police departments as a source of revenue?

Though this point has been muted in press, it’s actually a major component of the report. Ferguson bureaucrats, we are told, put significant pressure on the police to issue as many citations as possible, to the point of disciplining or demoting them if they don’t write enough tickets. Why do they do this? For the money, obviously. Bureaucrats aren’t terribly interested in on-the-street details as long as the cash keeps coming.

The Justice Department thinks cops should prioritize law and public safety. We should stop using them as de facto tax collectors.

Anyone opposed? I thought not. We all get angry when we feel the police are using the law as an excuse to shake us down. When police are pressured to be revenue-collectors, that undermines public trust, and (as the report suggests) motivates cops to abuse their authority. How much do we end up paying for that, in riot gear or vandalized property? If this report bolsters police departments’ ability to say “no” to greedy bureaucrats, that would be a pretty big upside.

2. What should we do about bully cops?

There are pages’ worth of anecdotes in this document, relating incident after incident in which cops do something regrettably familiar: act like bullies. They harass citizens on the barest of pretenses. They issue unreasonable or arbitrary orders. They find excuses to charge people with Disorderly Conduct or Failure to Comply when the real offense would best be described as Being Mouthy.

When minor laws are abused, citizens lose respect for order.

Not all cops are like this, of course. Even when they are, I can have some sympathy. It must be tough to spend your workday elbow-deep in human sin and suffering. That’s the sort of thing that can make a person bitter and hard.

But it’s still a problem. Bully cops may seem like a small-ish annoyance in the grander scheme, but think of them as the evil cousin to the “broken window” strategy of law enforcement. When minor laws are properly enforced, citizens gain a respect for order. When minor laws are abused, citizens lose respect for order. They also start resenting the police.

3. To what extent does ‘disparate impact’ actually point to systemic racism?

This, obviously, is the big one. It gets to the heart of the most explosive question: is the FPD racist?

‘Disparate impact’ analysis is not, in itself, adequate to prove systemic racism.

“Disparate impact” analysis is not, in itself, adequate to prove systemic racism. As Heather MacDonald recently explained at National Review, it’s unreasonable to draw definite conclusions from these numbers. It isn’t important whether African Americans represent a proportionate percentage of the population. The important question is: what percentage of violations do Ferguson’s African Americans commit?

Actually, the report does attempt to address this. It asserts multiple times that black residents of Ferguson are disproportionately targeted by law enforcement, even when controlling for other relevant factors. I’m not prepared to take the Justice Department’s word for that, but the assertion is backed up by at least some corroborating evidence. For example, African American drivers are significantly more likely to be stopped by the police in their cars, and significantly more likely to be searched. But searches of African American drivers are a bit less likely (23 percent) to uncover illegal contraband. That might suggest that cops are especially eager to stop and search drivers if they are black.

It’s something to consider. To be sure, pervasive and systemic racism isn’t the only possible explanation for those kinds of numbers. For instance, it looks as though the racial disparities for “stops” and “searches” are quite a bit larger than the disparity for finding contraband. Does that tell us anything? As with so many elements of this report, we can’t but wish for more context to help make sense of these numbers.

Given the explosive charges, it’s disappointing that the “racial bias” segment of the report only represents about 15 of its 100 pages. More analysis is clearly warranted. Again though, some of the disparities are big. It’s reasonable to want them explained more fully.

I put this question third for a reason, however. Let’s suppose, as the first two points imply, that the FPD (probably not uniquely in America) has grown somewhat over-aggressive about using the police to collect revenue, while also getting a bit lax about investigating complaints or disciplining bully cops. Let’s further stipulate that Ferguson is a place in which the cops are disproportionately white, and the criminals are disproportionately black. Is it surprising that this state of affairs might precipitate some “racial tensions”? Even if most cops aren’t individually racist, might this kind of soft abuse start to look (in a place with the demographics of Ferguson) a lot like racial injustice?

Of course, if that is the heart of this story, the good news is that we probably don’t need to pour our energies into hunting for bigots. We can focus on ensuring that policing is disciplined, honest and fair.

4. What’s up with these ‘canine bite’ incidents?

It’s a straight question. The report mentions that “in all 14 uses of force involving a canine bite for which we have information about the race of the person bitten, the person was African American.”

So, that’s interesting. How often do the police sic dogs on people? What’s the story here?

5. What other salacious emails did people send?

A lot of hay is being made in the press of the “seven racist emails” cited in the report, sent by government employees who (gasp!) still have jobs. Make no mistake: they’re offensive. A few were offensive enough to make me physically recoil from my computer screen. But we’re talking about a few emails plucked from a period spanning several years. How much does that actually tell us about politics in Ferguson? (And, dare I ask whether there were any anti-white emails in that giant mix? Okay, sorry, that was totally uncalled-for.)

This is really the question I find myself pondering at the end of this report. It tells us a good bit about how African Americans in Ferguson experience law enforcement. It doesn’t tell us much about how the world looks through a policeman’s eyes.

It would be nice to fill in that picture. If indeed Ferguson has developed an uncomfortable racial dynamic, that’s surely a two-way street to some degree. Now, don’t get me wrong. All things considered, the guy with the badge and gun has a responsibility to be the bigger person, especially in non-life-threatening situations. Even so, when we’re asking cops to (for example) leave the safety of their cars more often to interact with people on the street, it only seems fair to ask: how well would they be received? How safe would they feel?

Needless to say, Ferguson does not seem like a particularly healthy community from a criminal-justice perspective. Its problems likely are not wildly idiosyncratic. So even if Ferguson was, to some degree, “targeted” by the Justice Department (owing to an incident that almost certainly did not merit the attention it received), it would still be nice to use this information to get more perspective on what is happening in communities like Ferguson. For that, we need to hear law enforcement’s side of the story. Your move, FPD.