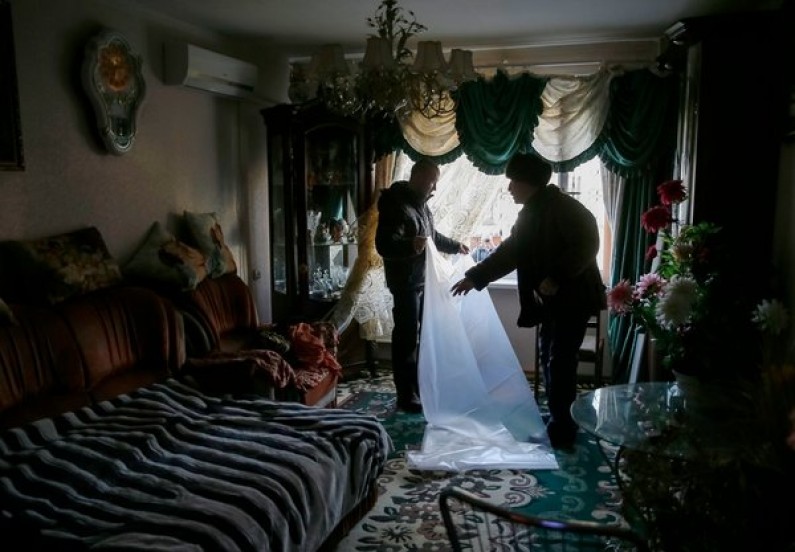 VIA “nytimes.com” by Andrew Higgins

BRUSSELS — His country’s oil export revenues and currency have slumped. Its economy is shrinking, and some of his own allies in Moscow have questioned where he is leading them. Yet when President Vladimir V. Putin of Russia sat down Wednesday in the Belarussian capital of Minsk with the leaders of Ukraine, Germany and France to discuss the conflict in eastern Ukraine, he still held the decisive cards.

For months now, Europe’s often fractious leaders have spoken with one voice on Ukraine, ruling out a military solution and pleading with all parties to find a way to resolve the dispute diplomatically. But in Minsk, they confronted the reality that Mr. Putin retains the upper hand precisely because he is prepared to use military force to get what he wants in diplomacy.

In a sign of Europe’s commitment to diplomacy, both Germany’s chancellor, Angela Merkel, the Continent’s most powerful political figure, and President François Hollande of France, the leader of Western Europe’s biggest country, traveled to Minsk on Wednesday in a last-ditch attempt to revive a moribund peace process begun in September with a truce deal, which was also negotiated in Minsk. They did so despite what Ms. Merkel’s spokesman, Steffen Seibert, said was just “a glimmer of hope.”

However, in Minsk, Europe’s faith in a “political solution” — a mantra repeated over the past year at every meeting in Brussels of leaders and foreign ministers — confronted the hard reality created by Mr. Putin, whose support for separatist rebels gutted the last Minsk agreement, empowered their quest for a clear military solution and amplified voices in Washington calling for military aid to Ukraine.

“Putin has got everyone spun up over what he is up to in Minsk, but he is playing a long game,” said Fiona Hill, the United States’ top intelligence officer on Russia from 2006 to 2009. “He plays on multiple fronts. We start talking about a military response, and he starts talking about diplomacy.”

Ms. Hill, now director of the Center on the United States and Europe at the Brookings Institution and co-author of “Mr. Putin: Operative in the Kremlin,” predicted that any new cease-fire accord would “only be temporary like the last one” because Mr. Putin constantly shifts between diplomatic and military options, depending on which he sees as giving Russia the most advantage.

The West, she added, assisted Russia’s tactical maneuvering by making it clear what it wanted while Mr. Putin constantly keeps everyone guessing. “You can win on a weak hand if your opponent is always showing you their hand,” she said.

Speaking in Brussels on Monday during a meeting of European foreign ministers that again reaffirmed the sanctity of diplomacy over force, the French foreign minister, Laurent Fabius, stressed that Wednesday’s talks in Minsk between the leaders of France, Germany, Russia, Ukraine and pro-Russian separatists needed to strengthen, not rewrite, September’s so-called Minsk Protocol.

But he acknowledged that fully putting it into effect was no longer an option because of what he called “certain evolutions on the ground,” namely a steady advance by pro-Russian fighters that has extended the territory they control by more than 200 square miles since September.

In the weeks preceding Wednesday’s Minsk summit talks, pro-Russian rebels, fortified by fresh supplies of Russian weapons, seized the ruins of the Donetsk airport and launched a determined offensive against the town of Debaltseve, an important rail junction and the last pocket of Ukrainian-held territory in a wide swath of territory north of Donetsk.

The gap between Europe’s dogged diplomacy and Mr. Putin’s approach to Ukraine, which mixes regular calls for peace with stealthy supplies of Russian weapons and even soldiers to the separatists, has left Moscow and Brussels “playing entirely different games,” said Amanda Paul, a Russia expert at the European Policy Center, a Brussels research group.

“Putin can outmaneuver us because he knows what our limits are. He knows we will not deploy troops. He knows that even if the United States decides to send some arms, Russia is still strong enough to defeat Ukraine,” she added. “But we have no idea what Putin’s limits are. He does not show his cards. The West does. Maybe there is not a military solution, but we should keep Russia guessing.”

While vague on his objectives in Ukraine beyond a determination to block what he sees as a plot by NATO to push deep into former Soviet territory, Mr. Putin has made clear his desire to divide the European Union, reaching out to countries like Hungary and Greece, where a new left-wing government has raised doubts about the wisdom of sanctions imposed on Moscow over Ukraine. So far, however, the 28-nation bloc has managed to stay unusually united, in part because it has stuck to relatively modest sanctions, in step with Washington.

Linas A. Linkevicius, the foreign minister of Lithuania, one of the few European countries that support sending weapons to Ukraine, said, “Diplomatic efforts are of course worthwhile, but we can’t judge whether they are working, even if we get Russia’s signature on an agreement. We have learned that we can only judge events on the ground.”

“We cannot trust a single word of the Russian leadership,” he added. “They are all worthless.”

The last Minsk agreement began to unravel almost as soon as it was signed. There were violations of the cease-fire on both sides, but particularly from the rebels, whose leader at the time, Pavel Gubarev, denounced the accord as a sellout and declared “we want to spit on this ‘peace.’ ”

Since then, the rebels have consolidated their previously fragmented land into a more defensible territory and have vowed to resist any return to a so-called “demarcation line” fixed in September. Mr. Fabius, the French foreign minister, indicated that France and Germany, which have taken the lead in Europe’s diplomatic push, would accept revisions to the earlier accord, saying that it would be respected “as far as possible.”

An annual security conference in Munich last weekend was dominated by discussion about Ukraine and debate over whether Wednesday’s peace talks would yield “Minsk plus,” a relaunch of last year’s accord, or “Minsk minus,” a confirmation that the earlier agreement was dead and would be replaced by a new deal that enshrined the rebels’ military gains.

Skepticism was rife about the prospects for a deal that did not reward armed force, and the German government has been deliberately downbeat since, suggesting that the Minsk meeting not even take place and that if it did, hopes of an enduring settlement were slim.

Asked whether it was more likely there would be a “Minsk plus” or a “Minsk minus,” Norbert Röttgen, the Christian Democrat who is chairman of the foreign affairs committee in the German Parliament, said he feared a minus from the Western standpoint.

“I think there will either be nothing, because Putin unfortunately tactically has the upper hand in the short term,” he said. “And Poroshenko only has a limited amount of room to maneuver.

“Or there will be a new cease-fire, a second Minsk, which would include a significant shift of the demarcation line to the West. The violation of Minsk 1 would then be honored in Minsk 2, and whether Putin would then keep to Minsk 2, there are considerable doubts,” Mr. Röttgen added.

Despite growing exasperation with Russia’s meddling and its repeated denials of arms supplies, European nations have strong reasons to reject the idea of arming Ukraine, even with defensive weapons, and to rely solely on economic sanctions.

“The only sector where Putin has nothing to fear is arms,” Paolo Gentiloni, the foreign minister of Italy, said during an interview with The New York Times editorial board on Wednesday. “Russia is weak in many sectors, but very strong in arms.”

Any weapons sent to Ukraine by the United States, he said, might even help Mr. Putin as it “could support his narrative” that Russia has legitimate reasons to fear Western military encroachment on its borders.