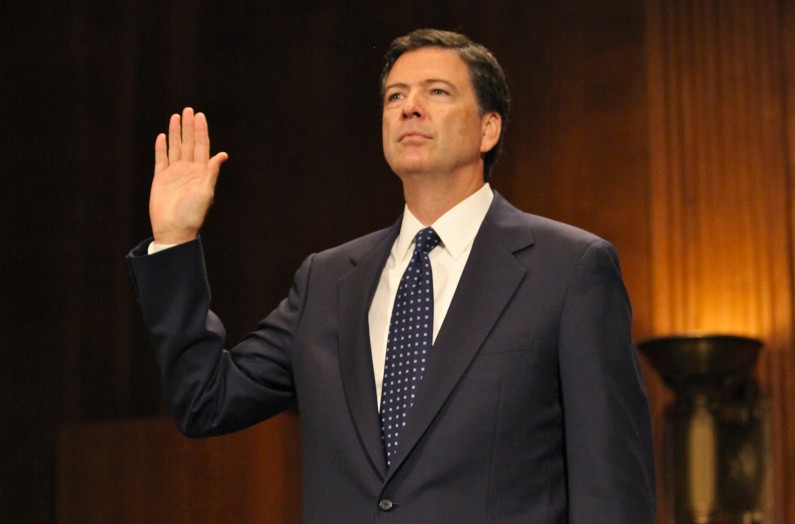 VIA “washingtonpost.com” by Sari Horwitz

In an unusually frank and personal speech, FBI Director James B. Comey on Thursday addressed “hard truths” about policing, acknowledging racial bias among law enforcement officers and lamenting a “disconnect” between police agencies and communities of color.

“We are at a crossroads,” Comey said. “As a society, we can choose to live our lives every day, raising our families, going to work and hoping someone, somewhere will do something to ease the tension, to smooth over the conflict. . . . Or we can choose instead to have an open and honest discussion about what our relationship is today.”

In giving the speech, to students at Georgetown University, Comey placed himself at the heart of the politically charged debate on race, policing and use of force that has so often riven minority communities during the Obama administration.

President Obama has spoken out several times about allegations of police brutality against minorities. In 2009, Attorney General Eric H. Holder Jr. sparked a controversy with a speech in which he said the United States was a “nation of cowards” when it came to discussing race.

Comey’s remarks were perhaps less provocative but still remarkably candid for a director of the FBI. They also did not come without risk, given the backlash by police across the country to previous statements by political figures about racial bias in law enforcement.

Police “often work in environments where a hugely disproportionate percentage of street crime is committed by young men of color,” Comey said. “Something happens to people of goodwill working in that environment. After years of police work, officers often can’t help but be influenced by the cynicism they feel.”

A police officer, whether “white or black,” has a different reaction to two young black men on the side of a street than he does to two white men, Comey said, because the black men “look like so many others the officer has locked up.”

At one point in his remarks, Comey cited the song “Everyone’s a Little Bit Racist” from the Broadway musical “Avenue Q” in making the case that everyone makes judgments based on race.

“Look around and you will find,” Comey said, quoting the lyrics, “no one’s really colorblind.”

In December, two minority New York police officers, Wenjian Liu and Rafael Ramos, were gunned down in Brooklyn while in a patrol car. During their memorial services, police officers turned their backs on New York Mayor Bill de Blasio, whom they accused of making insensitive comments about law enforcement.

Adolphus Pruitt, president of the St. Louis branch of the NAACP, which has been deeply involved in the response to the shooting in Ferguson last year, applauded Comey’s remarks.

“It is extremely profound and timely that the folks at the highest level of the justice system and law enforcement are beginning to talk publicly about what they know and we have always suspected,” Pruitt said.

While acknowledging biases within law enforcement, Comey, the grandson of an Irish police officer, also called on communities to appreciate the perspective of officers who “want to do good for a living” and who often risk their lives to protect others.

Amid the tension, Comey said, there is also a need for better data about encounters between police and the communities they protect. Comey said that, not long after the riots began in Ferguson, he asked his staff to provide statistics on the number of African Americans shot by police. They could not, he said, because data regarding officer-involved shootings is not consistently reported to the FBI. “It’s ridiculous that I can’t tell you how many people were shot by the police in this country,” he later said in response to a student’s question.

“With this speech, Jim Comey brought the FBI right into the national conversation about race and policing,” Wexler said. “His candor and forthrightness are striking and a breath of fresh air.”

But Jim Pasco, the executive director of the National Fraternal Order of Police, said the issues Comey addressed were the same ones the nation’s largest police organization has long been focused on. “We agree about the statistics of deaths in police custody,” Pasco said. “But we are also a proponent of keeping statistics on the assaults and deaths of law enforcement officers, which are supposed to be kept by the FBI but are not kept completely.”

In his remarks, Comey also reflected on the bitter history of race in America. A century ago, he noted, the police viewed the Irish “as drunks, ruffians and criminals.”

“Law enforcement’s biased view of the Irish lives on in the nickname we still use for the vehicles we use to transport groups of prisoners; it is, after all, the ‘paddy wagon,’ ” Comey said. “The Irish had some tough times, but little compares to the experience on our soil of black Americans.”

New FBI recruits, who are overwhelmingly white and male, have been taken to the U.S. Holocaust Memorial Museum for many years as part of their training. But since he became director, Comey has also insisted that new agents and analysts also be taken to the Martin Luther King Jr. Memorial.

“Much of our history is not pretty,” Comey said. “At many points in American history, law enforcement enforced the status quo, a status quo that was often brutally unfair to disfavored groups.”

Still, Comey said, law enforcement must learn from its “inheritance.”

“Many people in our white-majority culture have unconscious racial biases and react differently to a white face than a black face,” Comey said.

“We simply must find a way to see each other more clearly,” he said, adding later: “It is hard to hate up close.”

Wesley Lowery contributed to this report.