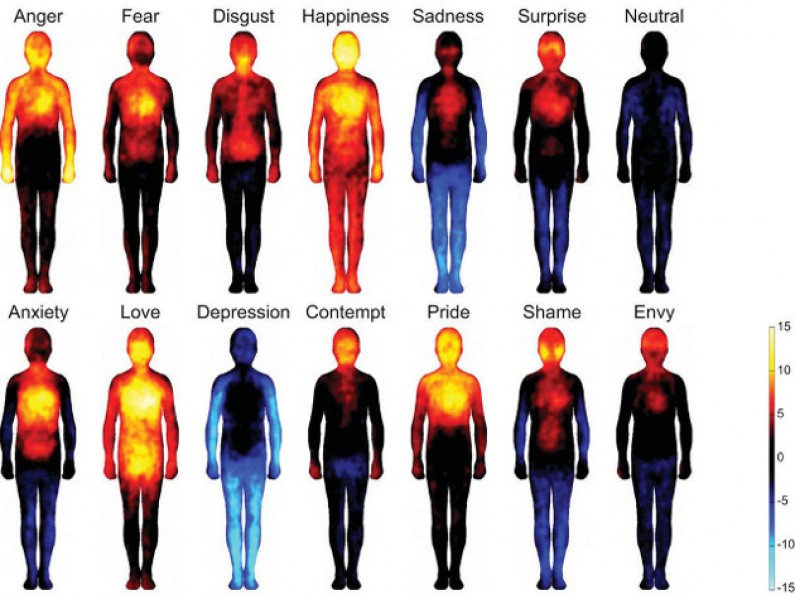 VIA “WakingTimes.com”, by Alex Pietrowski

Love makes us warm all over, and now scientists are creating body maps to prove it.

A team of scientists in Finland has used a topographical self-reported method to reveal the effects that different emotional states have on bodily sensations. After five experiments and over 700 participants from Finland, Sweden and Taiwan, who reported where on their bodies they felt different emotions, the scientists discovered surprising consistencies. Their research findings were published in the Proceedings of the National Academy of Sciences:

Most basic emotions were associated with sensations of elevated activity in the upper chest area, likely corresponding to changes in breathing and heart rate (1). Similarly, sensations in the head area were shared across all emotions, reflecting probably both physiological changes in the facial area (i.e., facial musculature activation, skin temperature, lacrimation) as well as the felt changes in the contents of mind triggered by the emotional events. Sensations in the upper limbs were most prominent in approach-oriented emotions, anger and happiness, whereas sensations of decreased limb activity were a defining feature of sadness. Sensations in the digestive system and around the throat region were mainly found in disgust. In contrast with all of the other emotions, happiness was associated with enhanced sensations all over the body.

Research on behavioral and physiological responses to emotions could help in understanding mood disorders such as anxiety and depression.

Emotions coordinate our behavior and physiological states during survival-salient events and pleasurable interactions. Even though we are often consciously aware of our current emotional state, such as anger or happiness, the mechanisms giving rise to these subjective sensations have remained unresolved. Here we used a topographical self-report tool to reveal that different emotional states are associated with topographically distinct and culturally universal bodily sensations; these sensations could underlie our conscious emotional experiences. Monitoring the topography of emotion-triggered bodily sensations brings forth a unique tool for emotion research and could even provide a biomarker for emotional disorders.

This research is another great example of the mind and body connection. Our brain sends signals to the body as we deal with certain situations, causing certain physiological changes without any thought on our part. These bodily sensations in turn could be helping the mind to consciously recognize what emotions we are having. This type of research could help explain why making an effort to smile more or sitting straight instead of slouching can alter our brain, improve our mood, and change our general disposition.

“People look at emotions as something in relation to other people,” Antonio Damasio, who is a professor at the University of Southern California, says. “But emotions also have to do with how we deal with the environment — threats and opportunities.” For those, Damasio says, you need your body as well as your mind.